Admin
Posts : 108264
Join date : 2012-01-04
Location : Woodstock Nation
Italy Joins BRICS
October 15, 2014 eClinik Leave a comment
While others are hesitating to deal with China, Italy decides to deal with the new G1 and leaves the collapsing EU for its own economic survival.
Italy and China sign business deals worth $10 billion 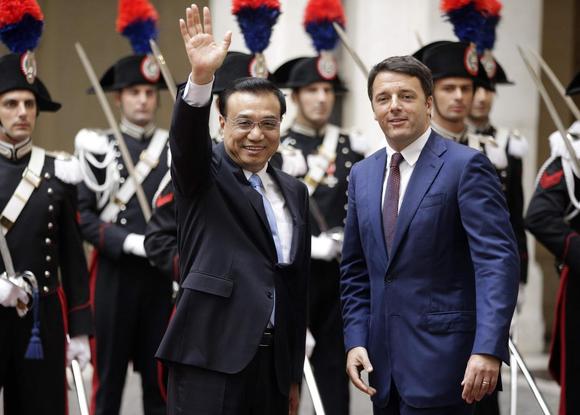 Italian Prime Minister Matteo Renzi (R) stands next to China’s Premier Li Keqiang as they arrives for a meeting at Chigi Palace in Rome, October 14 ,2014. Credit: Reuters/Max Rossi
(Reuters) – Italy and China signed business deals worth about 8 billion euros ($10 billion) on Tuesday in sectors ranging from energy to engineering, deepening Beijing’s commercial ties with the euro zone’s No. 3 economy.
China has already spent well over 5 billion euros buying stakes in some of Italy’s biggest companies this year.
At a news conference with Chinese Premier Li Keqiang in Rome, Italian Prime Minister Matteo Renzi said the deals were no more than an “antipasto” and should open the way to further accords with China in the future.
“We must bring more China to Italy and take more Italy to China,” he said.
Li, who will be attending the ASEM meeting of Asian and European leaders in Milan on Thursday and Friday, said China wished to strengthen cooperation with small and medium-sized firms and would encourage more Chinese tourists to visit Italy.
With Italy’s economy now back in recession for the third time since 2008 and foreign investors wary of the country’s notorious red tape and unpredictable legal system, Renzi’s government has been keen to woo cash-rich buyers from China.
The deals in Italy follow a series of business accords Li signed during a visit to Berlin last week.
Italian state lender CDP said it had signed an accord with China Development Bank (CDB) for cooperation projects worth up to 3 billion euros over the first five years of the deal.
It gave no details but said the projects could be in infrastructure, direct equity investments or export financing. An Italian source said CDB would put up more than half of the total financial resources made available for joint investments.
In addition, Italian state investment fund FSI said it had signed a memorandum of understanding with China Investment Corp, a sovereign wealth fund responsible for managing part of China’s foreign exchange reserves, for joint investment projects in which each would provide up to 500 million euros.
Among other deals, aerospace group Finmeccanica announced a 400 million euro contract to supply 50 helicopters, while electricity group Enel (ENEI.MI) signed a memorandum of understanding with Bank of China potentially making available up to 1 billion euros of financing over the next five years.
As well as being a big buyer of Italian government bonds, China’s central bank has made a series of significant investments in blue- chip Italian companies this year. They include stakes of about 2 percent in Italy’s biggest carmaker Fiat FIA.MI, top domestic telecoms operator Telecom Italia (TLIT.MI) and world No. 1 cable maker Prysmian (PRY.MI).
In March, the central bank bought similar stakes in leading oil and gas operator Eni (ENI.MI) — an investment worth 1.3 billion euros — and in utility Enel.
In addition, China’s State Grid bought a 35-percent stake in energy grid holding company CDP Reti for 2.1 billion euros and Shanghai Electric Group took a 40 percent stake in power engineering company Ansaldo Energia from Italian state fund FSI in a deal worth 400 million euros.
(Additional reporting by Oleg Vukmanovic, James Mackenzie and Luca Trogni; Writing by James Mackenzie; Editing by Louise Ireland)
source »

Would you like to like to have your own eClinik at home?
You can easily defeat cancer, AIDS and help your body cure all known and unknown illnesses without using drugs, at the comfort of your own home. This is our experience. Find out more about it here.
Every download of our eBook, Towards Healthcare Emancipation – Premium Edition, provides additional funding to our next project.
If you haven’t done so, please like our FB page to encourage others to learn more about our work.
Thank you very much for your valuable support. Mabuhay!