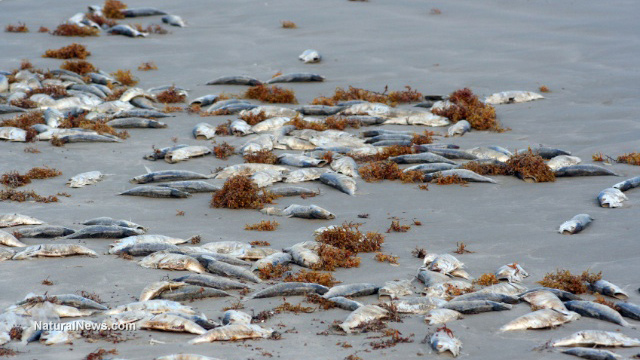 (NaturalNews) While it is common knowledge that living unsustainably has its consequences, that hasn’t prevented the majority of the world from excessively over consuming its limited resources.

A recent report by the World Wildlife Fund (WWF) presents us with a stark reminder of the impact that humans are having on the planet, with statistics repugnant enough to make your heart sink.

For quite some time, Natural News has reported on the decline of marine life along the West Coast and other areas, highlighting the dangers of overfishing, the use of harmful pesticides and the consequences from environmental pollution caused by humans.

The 2014 Living Planet Report provides us with a bleak overview of those consequences. WWF measured more than 10,000 populations of over 3,000 different species across the globe, including mammals, birds, reptiles, amphibians and fish, of all which have declined by a shocking 52% since 1970, according to the report.

If that number doesn’t make you sick, think about it this way; in less than just two human generations, population sizes of vertebrate species have dropped by half because of human activity.

[size=undefined]Experts say that Earth would need to be 1.5 times larger to sufficiently absorb all of man’s destruction[/size]

Arguably the saddest part about these numbers is that the decline was totally preventable. Humans’ success is directly attributed to our beautiful, nourishing planet and the bountiful, but not endless, resources it provides us.

A variety of human practices, including deforestation, climate change, over-fishing and hunting, have caused us to lose so many of nature’s remarkable animals in a very short period of time, illustrating the rapid progression of human overconsumption.

Wildlife in low-income nations are suffering the most, with populations declining by 58% on average between 1970 and 2010. Latin America has lost the most animals, with an 83% decrease over the last 40 years, reported The Telegraph.

African forest elephants are among the species threatened, with their habitats continuously destroyed by hunting and habitat loss caused by humans clearing land for farming. Their range shrank from three million square miles to one million square miles in just 27 years due to commercial logging and mining, a practice that removes the dense forests they love, leaving them exposed in open fields and making them easy targets for poachers.

Animals aren’t just magnificent, but mandatory for a healthy ecosystem. Forest elephants help the rainforest grow by eating the seeds of rain forest trees, which are germinated after passing through their digestive tracts.

In Britain, turtle doves, seals, red squirrels and hedgehogs are amongst some of the animals dying off. Farmland birds in the United Kingdom are also suffering from habitat degradation.

“This damage is not inevitable, but a consequence of the way we choose to live,” said professor Ken Norris, director of science of the Zoological Society of London.

“Although the report shows the situation is critical, there is still hope. Protecting nature needs focused conservation action, political will and support from businesses.”

Using your car less, reducing your dairy and meat intake, and purchasing products from companies dedicated to giving back to the environment can help get us out of this mess.

Try to only buy fish with a Marine Stewardship Council (MSC) label, an organization that rewards sustainable fishing practices and cares about replenishing our oceans. Eating organic makes a big difference too, as their farming practices are much more clean and sustainable than conventional ones.

Using recycled content, like toilet paper and paper towels, and investing in energy efficient appliances and biodegradable products are other ways to reduce overuse.

Remember, if we all make just a few of these changes, we can help bring back those animals that deserve to be here as much as we do; maybe even more.

» In 24 hours, the world's top scientists will release the most important report in decades: proving once and for all that climate change is a massive threat
» Alternative Medicine Animals Domestic, Farm, Wildlife Animals Reno, Nevada
» NELSON MANDELA DIED ON JUNE 26 2013. SO WHY ARE 91 WORLD LEADERS "REALLY" IN AFRICA?
» CDC: Number of Americans Who Died ‘From’ COVID-19 is Only Around 20k – The Others Died ‘With’ It
» We Have Alien Technology, and it Looks Like We've Had It For Decades!