How Curry Can Kill Cancer Cells

How Curry Can Kill Cancer Cells

It is estimated that the human body consists of ten or so trillion cells. Almost all of these cells get turned over within approximately 100 days. That means we’re like a new person every three months. We reinvent ourselves physically. And since we’re physically made of air, water, and food—those are the only inputs—we are what we eat, literally and physically. In a sense our body has to rebuild itself every three months with the building materials we deliver to it through our stomach. Our mouths are like the access road to the continual construction site of our body. Trucks roll in three times a day. What do we want them to deliver? Some shoddy cheap stuff we scrounged around for or bought at the discount outlets that’s just going to fall apart? Or do we want to build our foundation solid? We are each walking inside the greatest known architectural structures in the universe. Let’s not ruin such grand blueprints by consuming crap.

We only own the biological real estate we’re born with, so if we need to rebuild every three months, we also need a wrecking crew. If we’re replacing ten trillion cells every hundred days, that means we have to kill off about 100 billion cells every day. Out with the old, in with the new. 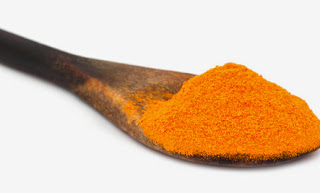 We do that primarily through “apoptosis,” pre-programmed cell death (from the Greek ptosis, meaning “falling”, and apo, “away from”). For example, we all used to have webbed fingers and toes. Literally. Each one of us did in the womb until about four months, when apoptosis kicked in, and the cells in the webbing kill themselves off to separate our fingers.

However, some cells overstay their welcome, like cancer cells. They don’t die when they’re supposed to by somehow turning off their suicide genes. What can we do about that? Well, one of the ways curry kills cancer cells is by reprogramming the self-destruct mechanism back into cancer cells. Let me just run through one of these pathways.

Curcumin can also activate the death machine directly (as shown in lung cancer and colon cancer). Caspases are so-called “executioner enzymes,” that when activated, destroy the cancer cell from within by chopping up proteins left and right—kind of like death by a thousand cuts.

And that’s just one pathway. Curcumin can also affect apoptosis in a myriad other ways, affecting a multitude of different types of cancer cells. It also tends to leave normal cells alone for reasons that are not fully understood. Overall, researchers “showed that curcumin can kill a wide variety of tumor cell types through diverse mechanisms. And because curcumin can affect numerous mechanisms of cell death at the same time, it’s possible that cancer cells may not easily develop resistance to curcumin-induced cell death like they do to most chemotherapy.”

For more on turmeric and cancer, check out Back to Our Roots: Curry and Cancer and Carcinogen Blocking Effects of Turmeric.

Other herbs and spices such as garlic and amla have similar selective effects against cancer cell.

PS: If you haven’t yet, you can subscribe to my free videos here and watch my live year-in-review presentations Uprooting the Leading Causes of Death, More Than an Apple a Day, and From Table to Able.