In just a span of one week, resignations after another are plaguing Abe’s government. We are expecting more heads to roll including that of Abe himself. 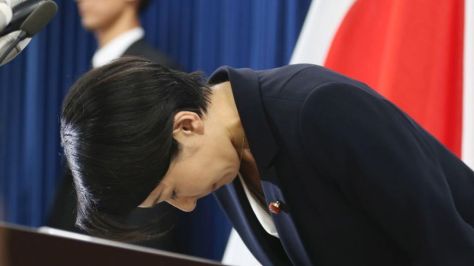 Japanese Minister of Economy, Trade and Industry Yoichi Miyazawa reported to have used political funding at an S-M bar in his home district.
MOSCOW, October 23 (RIA Novosti) – Japan has suffered yet another political scandal this week as the newly-appointed trade minister Yoichi Miyazawa announced today that his political support group was spending money at a sadomasochism-themed bar in Hiroshima.
Yoichi Miyazawa, 64, reported today an ¥18,230 ($169.90) bill from a visit to an S-M bar nearly four years ago, on 6 September, 2010. The minister has also distanced himself from the related allegations, saying that he personally was not present at the Hiroshima venue, and stated that the money was spent by an employee of his political office, reported The Asahi Shimbun. The media has revealed that the S-M club hosts shows during which female performers are tied up and whipped, also performing the same actions on customers themselves. Nudity to a large extent is part of the show.
“It is true such expenses were made,” Miyazawa said, as quoted by Reuters. “But I myself did not go there at all. That’s true as well.”
It is still unknown whether the minister is going to resign. Mr. Miyazawa is nephew to late Prime Minister Kiichi Miyazawa and a cousin of Foreign Minister Fumio Kishida, a Harvard graduate and a former top employee of the Finance Ministry.
Mr. Miyazawa’s political office has already released an official statement on the occasion. “It has been confirmed that Miyazawa himself did not participate,” the statement reads, as quoted by Tokyo Reporter. “The details as to how this (expense) was entered into the political funding report is under investigation.”
Two other scandals that have shaken the Japanese government this week are Mr. Miyazawa’s predecessor’s Yuko Obuchi step down and the resignation of Justice Minister Midori Matsushima. Ms. Obuchi has left the office over allegations of misspending political funds, while Ms. Matsushima was forces to resign amid accusations of attempting to buy votes.
The S-M scandal around Mr. Miyazawa along with the aforementioned governmental scandals pose a headache to Prime Minister Shinzo Abe’s administration as he may have a hard time finding proper replacements for the vacant positions during the ongoing gender reforms. Mr. Abe had once been forced to resign as PM himself, after a series of ministerial scandals marking the demise of his first cabinet in 2007, says AFP.
source »
In Japan, two female ministers quit, dealing a blow to Abe and ‘womenomics’ Yuko Obuchi, Japan’s economy, trade and industry minister, announces her resignation at a news conference at her office in Tokyo on Monday. Obuchi resigned over claims she misused political funds. (Yoshikazu Tsuno/AFP/Getty Images) TOKYO — Two female Japanese cabinet ministers, appointed last month as part of Prime Minister Shinzo Abe’s plan to let women “shine,” resigned their posts Monday amid allegations of financial impropriety.Their departures undermine Abe’s efforts to lead by example when it comes to promoting working women, and they cast a dark cloud over his administration at a difficult time. The prime minister’s “Abenomics” plan to revive the economy looks to be fizzling out, and he must decide in the next few months whether to press ahead with a hugely unpopular rise in the consumption tax.“I apologize to all citizens for what happened,” Abe told reporters outside his office Monday afternoon as Trade and Industry Minister Yuko Obuchi and Justice Minister Midori Matsushima resigned within hours of each other.Abe swiftly appointed Yoichi Miyazawa, a former official in the powerful Finance Ministry, as the new trade and industry minister. He appointed another woman as justice minister, turning to Yoko Kamikawa, who previously served as minister for gender equality and once worked for Sen. Max Baucus (D-Mont.), who is now ambassador to China.
“I hurried on the selection of the replacements, as difficult tasks are piling up and we must proceed with the economy as a top priority,” Abe said.

The resignations mark Abe’s biggest setback since he returned to the premiership almost two years ago.

“The fact that Abe was putting so much emphasis on women makes it even harder for him,” said Koichi Nakano, a political scientist at Sophia University in Tokyo.

The first minister to fall on Monday was Obuchi, a 40-year-old mother of two young children and daughter of a former prime minister, who was widely touted as potentially “Japan’s first female prime minister.” Abe last month promoted her to lead the powerful Ministry of Economy, Trade and Industry (METI), making her one of five women in the newly reshuffled cabinet.

With Japan’s labor force aging and shrinking, Abe has presented women, who often stop working once they get married, as critical to hoisting Japan out of its decades of economic stagnation. He has made a policy dubbed “womenomics” a key part of his strategy to revive Japan’s economy through structural reforms.

But the shine quickly came off Obuchi’s star.

Only six weeks after she was promoted to the cabinet, reports surfaced that her political funds report for 2012, the year of the last general election, did not include revenue and spending on theater tickets for her backers, organized by her support group. There was a gap of about $424,000 in her accounts.

Another support group bought $35,000 worth of goods from businesses run by Obuchi’s sister and brother-in-law, the public broadcaster NHK reported, in violation of political funding laws.

“As a member of the Abe cabinet, I feel sorry that I could not contribute anything to various issues such as the economic recovery and the realization of a society where women can shine, and I apologize,” Obuchi said in a televised statement Monday morning, bowing deeply to the reporters in the room.

“As minister of METI, it’s unforgivable for my personal issues to cause economic policies and energy policies to stagnate. I resign here and would like to put all my effort into regaining everyone’s trust by investigating these doubts,” she said matter-of-factly. But at times she appeared to be holding back tears and paused to compose herself. “People expected a lot. I regret I could not play any role, and I feel sorry.”

Only a few hours later, Matsushima also submitted her resignation. She had been accused of breaking political campaign laws for distributing paper fans during summer festivals.

The cheap fans are commonly handed out at festivals during humid August and might seem trivial outside Japan. Over a three-year period, Matsushima gave away to voters almost 22,000 fans featuring a caricature of her and costing about 75 cents each, according to reports.

Critics here said the fans exceeded the value of what is allowed to be distributed. Japan has strict rules that ban giving anything with monetary or material value to voters — whether they be lavish end-of-year gift boxes or throwaway fans.

“I feel sorry that my recent words and actions caused political and administrative stagnation,” Matsushima said in a televised news conference, looking much more relaxed about the situation than Obuchi and even smiling at times.

Matsushima denied breaking any laws, saying that the fans are not valuable because they are given out and immediately thrown away, meaning that they could not be considered donations.

“I myself do not think I did anything that violates any law, but I am resigning as I don’t wish to cause any more paralysis,” the 58-year-old former journalist said.

Their resignations are the first since Abe was reelected in December 2012. His first term, between 2006 and 2007, was marked by scandals, during which a number of ministers quit and one committed suicide. In one instance, Abe lost two agriculture ministers in quick succession after the replacement turned out to have problems similar to those of his predecessor.

“These scandals will be haunting [Abe] since they brought him down the first time,” said Nakano, the political scientist.

After returning to office with a strong mandate and impressive poll numbers, Abe is beginning to struggle. In addition to questions about his choice of ministers, the prime minister is now faced with a dilemma over whether to raise the consumption tax by 2 percentage points, to 10 percent. Fiscal hawks say the move is necessary to help repair the public finances, but others warn it would derail the nascent economic recovery.

The latest opinion surveys have contained discomforting news for the prime minister. A Kyodo poll released Sunday showed Abe’s cabinet had an approval rating of 48.1 percent, down almost 7 points from early September.

Yuki Oda contributed to this report.

Anna Fifield is The Post’s bureau chief in Tokyo, focusing on Japan and the Koreas. She previously reported for the Financial Times from Washington DC, Seoul, Sydney, London and from across the Middle East.
source »
Would you like to like to have your own eClinik at home?
You can easily defeat cancer, AIDS and help your body cure all known and unknown illnesses without using drugs, at the comfort of your own home. This is our experience. Find out more about it here.
Every download of our eBook, Towards Healthcare Emancipation – Premium Edition, provides additional funding to our next project.
If you haven’t done so, please like our FB page to encourage others to learn more about our work.

Hours later Mr Abe announced that Ms Matsushima, 58, had also resigned.
She had distributed paper fans carrying her image and policies at a festival in her constituency, said NHK.
The opposition Democratic Party filed a criminal complaint against her on Friday, and demanded her resignation, saying this was an apparent violation of election law and rules on usage of political funds. 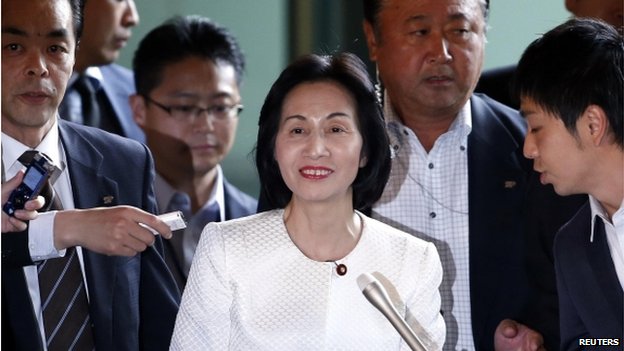 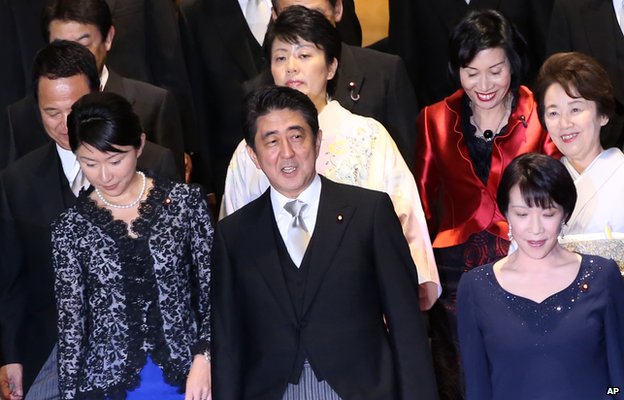 Shinzo Abe has now lost two of the five women he appointed to his cabinet in September
The BBC’s Japan correspondent Rupert Wingfield-Hayes says that this is not the end of Mr Abe’s problems concerning his new female ministers.
Eriko Yamatani, minister in charge of the North Korean abduction issue, was shown in photographs with members of an ultra-nationalist group accused of hate speech against Japan’s ethnic Korean community.
Mr Abe’s first term as prime minister in 2006-2007 saw a string of scandals amongst his ministers, eventually leading to his own resignation for health reasons after just one year in office.
source »
Sobbing Japanese politician resigns

Ryutaro Nonomura cries during a press conference in Kobe, western Japan (AP/Kyodo News)
A Japanese politician who was seen sobbing over dubious spending in a video that went viral has offered his resignation.
Assemblyman Ryutaro Nonomura, 47, a Hyogo Prefectural assemblyman, will have to wait to find out if the assembly will accept his resignation, spokeswoman Chika Fukuyama said.
Mr Nonomura burst into tears and screamed nonsensical phrases when he was asked at a news conference last week about the number of trips he took to a hot springs at taxpayers’ expense.
The video had drawn 2.7 million views as of Friday on just one site. His wailing spawned several spoofs, some of which juxtaposed his voice with rock music and jazz piano.
Calls for his resignation have grown after it emerged M r Nonomura visited the hot springs 106 times last year, using public money, and reporting it as political activity.
Press Association