Reposted from: Waking Times | by Terence Newton
Is the truth of human history concealed and buried beneath the oceans? Hundreds of sunken cities adorn the ocean floors of our planet, and dozens of them are believed to be more than 3 millennia old. Although most people are only familiar with the myth of the underwater kingdom of Atlantis, sunken ruins of ancient civilizations are as real as the Egyptian pyramids and can offer us many clues about the history of humanity.
Researchers believe that most sunken civilizations were submerged by the end of the last Ice Age about 9,000 to 10,000 years ago, as the massive ice caps covering much of Europe and North America melted. There are also sunken archaeological sites which are believed to have fallen due to seismic activity, such as earthquakes and volcanic eruption.
What makes the following three sites interesting is that they all date back to a time when we have been taught to believe that humans only lived as nomads or in small settlements and were incapable of organizing a large-scale, civilized society. Although some skeptics may continue to argue that structures at these sites were made by nature, many historians and archaeologists are starting toquestion the mainstream view of ancient human history and continue to seek proof that support their alternative theories that these were man-made, pre-historic civilizations. 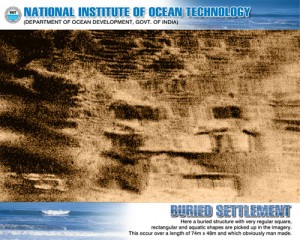 Found off the coast of India near Pakistan in the Gulf of Cambay, the Cambay Ruins are one of the most ancient of the world’s sunken cities. They were discovered in 2001 by India’s National Institute of Ocean Technology, led by chief geologist Badrinaryan Badrinaryan. Artifacts such as pottery, human bones and sections of wall were recovered from the site.
Certain pieces have been carbon-dated at nearly 9,500 years old by both the National Geophysical Research Institute in Hyderabad, India, and Geowissenschaftlicte Gemeinschaftsaulguben in Hannover, Germany. If the carbon-dating carried out by these two organizations is accurate, this site predates the oldest known civilization in the region, the Harappan, by more than 5,000 years.
The Cambay Ruins sit at 120 feet (36 meters) underwater and measure five by three miles. Marine archaeologists believe that the buildings at the site stand on enormous foundations, which they discovered using a technique known as sub-bottom profiling.

“The [oceanographers] found that they were dealing with two large blocks of apparently man-made structures.”
“Cities on this scale are not known in the archaeological record until roughly 4,500 years ago when the first big cities begin to appear in Mesopotamia.”
“Nothing else on the scale of the underwater cities of Cambay is known. The first cities of the historical period are as far away from these cities as we are today from the pyramids of Egypt.”
~ Graham Hancock, author of Underworld: The Mysterious Origins of Civilization 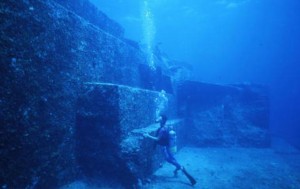 Off the southern coast of Yonaguni, Japan, about 70 feet underwater lies a massive pyramid, often called the “Japanese Atlantis.” The site is dated to be at least 5,000 years old, based on the dates of stalactites found inside underwater caves that sank with the city. The Yonaguni pyramid is believed by some to have been taken by an earthquake about 2,000 years ago.
Some scientists think this is a natural structure resulting from tectonic activity, although many argue that the pyramid is man-made, considering many 90-degree angles, man and animal-like carvings, and what appears to be stairways and a massive arch.

“The largest structure looks like a complicated, monolithic, stepped pyramid that rises from a depth of 25 meters [82 feet].”
“I think it’s very difficult to explain away their origin as being purely natural, because of the vast amount of evidence of man’s influence on the structures.”
~ Masaaki Kimura, a marine geologist at the University of the Ryukyus in Japan

Many experts believe that the site consists of remnants of an old city that existed above ground when the sea levels were much lower than they are today. One possible culture that inhabited this site is the Jomon, Japanese inhabitants, who existed from around 12,000 BC to around 300 BC and are believed to be the first culture on Earth to develop pottery. Some believe that the site is what remains of Mu, a fabled Pacific civilization rumored to have vanished beneath the waves. 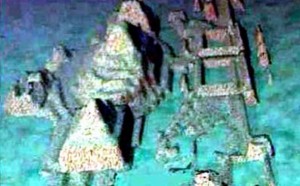 In the deep waters of Cabo de San Antonio off the west coast of Cuba rests one of the most fascinating of the ancient sunken cities. The site was discovered by the Russian/Canadian oceanographer Paulina Zelitsky and the Advanced Digital Communications exploration company when their expedition in the area brought them upon unusual formations of smooth blocks, crests, and geometric shapes.
Because the site is underneath 1,900 to 2,500 feet of water (about a half mile, or 600-750 meters), it has been difficult to truly explore the area. There are no real images of the sunken city of Cabo de San Antonio, although data collected using sonar scans and video reveals structures that are not likely to form naturally.

“These are extremely peculiar structures, and they have captured our imagination.”
“If I had to explain this geologically, I would have a hard time.”
~ Geologist Manuel Iturralde, director of research at Cuba’s Natural History Museum

A theory exists that this sunken metropolis is old enough to have existed during the Ice Age, and it is believed that the city sank anywhere from 15,000 to 50,000 years ago. Ancient stories of the Mayaand native Yucatecos passed through the generations tell of an island inhabited by their ancestors that vanished beneath the waves. After continued research, Zelitsky has identified that the site measures about 20 square kilometers (a size of a modern city). She has collected many samples that prove the site is man-made and was at one time above sea level.

“Samples that we recovered from the ocean bottom have justified our structures that we callmegalithic structures. The samples are granite stone, completely polished, with some incrustations of fossils. Fossils of organic creatures that normally live on the surface, not on the ocean bottom.”
“The stone we recovered from ocean bottom is very polished granite. All of the peninsula of northwest part of Cuba, all of this peninsula is limestone, very fractured limestone. So, geologically, it (megalithic granite structures) is totally foreign to Cuba. But it’s also not known in Yucatan because Yucatan is also limestone, not granite. Granite is found only in the center of Mexico.”
~ Paulina Zelitsky, Ocean Engineer, Advanced Digital Communications

Just how many ruins of ancient civilizations are buried under the vast ocean waters of the Earth? Underwater findings such as these three sites give us a new perspective on the history of the human race, and more questions than answers.

Terence Newton is a staff writer for WakingTimes.com, and an aficionado of interesting things. When he is not meditating, or thriving on this ball of confusion we call earth, he is busy helping out and spreading light.

» 6 Great Enigmas of the Ancient Architects
» 5 greatest unsolved enigmas of humanity
» Top 10 Puzzling Anomalies Of India That No One Can Explain
» Megalithic Enigmas Of Baalbek Lebanon: Part 1,2 & 3
» Ten Archaeological Enigmas from Across the Globe