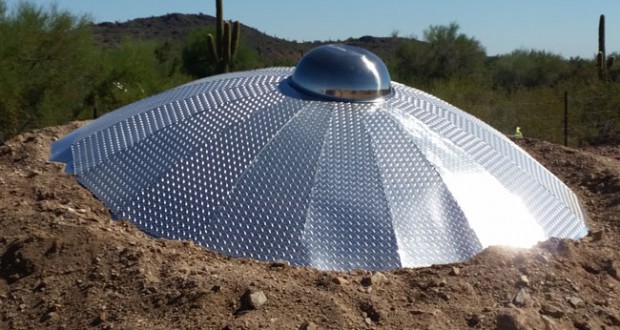 The UFO model created for MUFON’s Arizona desert Boot Camp was first observed by a private pilot – which seemed to trigger two F16 fighter jets to show up and a sheriff’s department helicopter. (Credit: MUFON)
Air Force investigates ‘crashed UFO’ in Arizona desert
Posted by: Roger Marsh October 24, 2014 0 5,186 Views
The U.S. Air Force officially does not investigate reports of UFOs – but a “crashed UFO” in the Arizona desert just outside of Phoenix October 23, 2014, caused two F16 fighter jets to scramble to that location for a closer look, according to Mutual UFO Network (MUFON) field investigators conducting a training boot camp.
The UFO was actually a model created for the boot camp for use training the 25 field investigators who signed up.
According to MUFON International Director David MacDonald, the entire class and instructors had not yet assembled at the “crash site,” but STAR Team Deputy Director Chuck Modlin and Photo Analyst Marc D’Antonio were at the site.
“They first noticed a private pilot coming by,” MacDonald said. “A glint of the UFO’s metallic color probably caught the pilot’s eye. You could see his wings tip up and he came around for a closer look.”
From the ground location investigators realized the UFO model had been seen, but did not expect what happened next.
“About 20 minutes later,” MacDonald said, “two F16s came over at a low pass – obviously checking out the crash site. Luke Air Force Base is nearby so we suspect they were scrambled from there. We’re also thinking the pilot of that private plane must have radioed this in.”
But aerial observation was not over.
“Another 20 minutes later a sheriff’s department helicopter came over and dropped down to about 50 feet over the crashed saucer to take a good, close look.”
MUFON management took the event humorously.
“If you think the federal government does not investigate UFOs – think twice,” said Jan C. Harzan, MUFON’s Executive Director. “Imagine how the original report on our model would have been radioed in by that pilot. The Air Force did not hesitate. I don’t think having two F16s at our crash site was a coincidence. They were sent out to observe and report back on the situation.”