Why are the Rockefellers and the Jesuits guiding the UFO Disclosure Movement?

Why are the Rockefellers and the Jesuits guiding the UFO Disclosure Movement? Thu Oct 30, 2014 1:59 pm

Ken – Why are the Rockefellers and the Jesuits guiding the UFO Disclosure Movement? 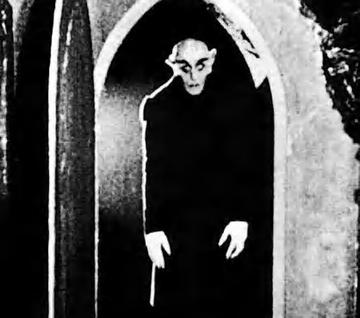 .
…The Rockefellers, the Jesuits, and the channelers can vouch for us. We’re your benevolent space brothers.”
The Rockefellers: Founders of the Disclosure Movement
Last week, I came across a video titled Stephen Bassett E.T. Disclosure Conference 2014, and I couldn’t help but notice the reaction counters below it. If they are correct, the information in the video was uncritically accepted by the site’s visitors, and I found that quite troubling. No one paused to think of who might be behind the information being presented or of how it might fit in with the globalists’ transition plan. This being the case, I decided to do a little investigating so I could show everyone what’s really going on with Disclosure.
To begin, let’s look at what Bassett says at the 3:54 mark of the video…
“The Truth Embargo, which I casually refer to, was a massive program in which billions upon billions of dollars were spent not only to keep the research secret, to keep the finances secret, and to keep the media under control, and the philanthropists out of the picture, and the universities pretty much out of the picture…”
To the casual viewer, his mention of “the philanthropists” might sail by unnoticed, but if you’ve researched how the disclosure movement got started, you know he is actually referring to one specific “philanthropist”: the true father of the Disclosure Movement, Laurance Rockefeller…
. 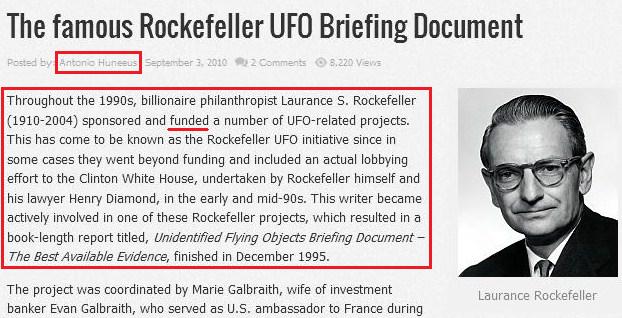 …This is a portion of an article on the Open Minds: UFO News and Investigations website which was written by Antonio Huneeus. Huneeus has a long history in the Disclosure Movement, has worked with Rockefeller, and testified to Rockefeller’s involvement in the Movement at the Citizen Hearing on UFO Disclosure…
. 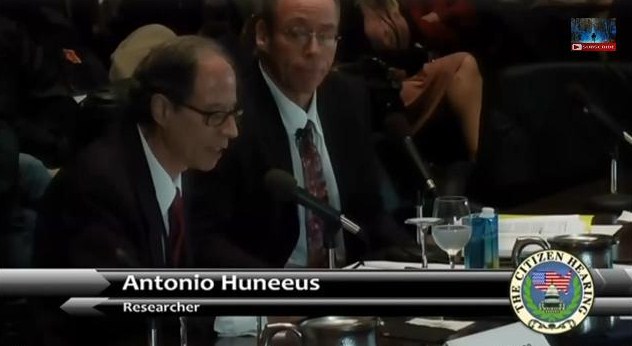 .
…The video is only 9 min 40 sec long, and if you can suffer through Huneeus’ dry delivery, it is quite informative.
The Rockefeller role in getting the Disclosure ball rolling is something of an open secret among the Disclosure people (the Disclosuristas, as I call them). On Stephen Bassett’s own Paradigm Research Group website, a specific Rockefeller effort referred to as the “[url=http://www.paradigmresearchgroup.org/Rockefeller Documents/Rockefeller_Initiative_Documents.htm]Rockefeller Initiative[/url]” is openly touted  The same effort is also touted on Steven Greer’s Disclosure Project website as “Project Starlight“…
“This letter from The Project Starlight Coalition was the result of the historic Asilomar, California meeting that Dr. Greer organized and Laurance Rockefeller paid for in June of 1995, just before Clinton’s meeting with Rockefeller in August 1995.”
As I continued to examine the Rockefeller family connection to the Disclosure Movement, I came across this MUST SEE video which puts together a number of video clips on the subject. At the 1:54 mark, Steven Greer (the putative head of the Disclosure Movement) speaks of Laurance Rockefeller… 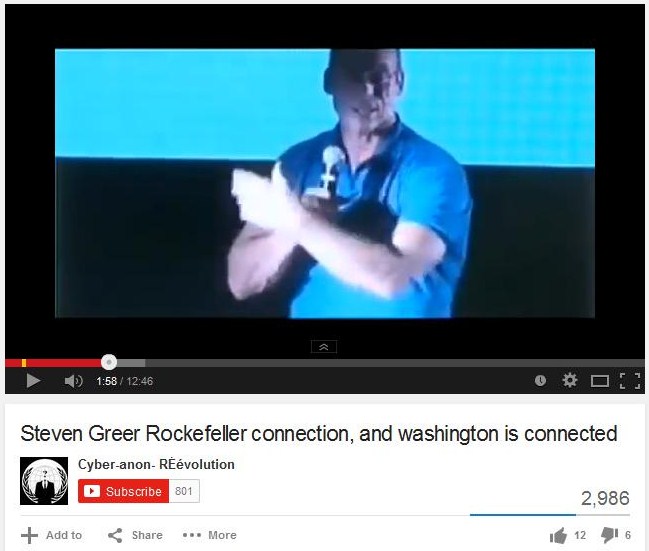 In his remarks on Laurance, Greer refers to him as “the philosopher of the (Rockefeller) family,” which is typical of how the Disclosuristas attempt to explain-away Rockefeller family involvement in their movement. They try to paint Laurance as a family maverick who was unlike all the other globalists in the Rockefeller clan. Greer also speaks of a supposed conflict between brothers David and Laurance Rockefeller over whether the UFO secrets should be exposed, and this theme of a supposed rift or divergence of interests among the Rockefellers is also parroted by Grant Cameron in [url=http://www.comufon.org/documents/CH Transcript day 1.pdf]his testimony at the Citizen Hearing on Disclosure (page 90)[/url]…
“Basically what the FOIA documents show is that billionaire businessman Laurance Rockefeller had approached the White House to get the government to disclose the truth behind the UFO mystery. There are different Rockefellers; there is Nelson Rockefeller who was the political guy who ran for government; there was David who was the money guy and Laurance Rockefeller was the humanitarian. He had a philosophy degree from Princeton University and was very interested in this phenomenon.”
Unfortunately for the Disclosuristas, this attempt to paint Laurance as a renegade “good Rockefeller” doesn’t stand up to scrutiny.
According to Laurance Rockefeller’s bio…
“In 1937, he inherited his grandfather’s seat on the New York Stock Exchange. He served as founding trustee of the Rockefeller Brothers Fund for forty-two years, from its inception in 1940 to 1982; during this time he also served as president (1958–1968) and later its chairman (1968–1980) for twenty-two years, longer than any other leader in the Fund’s history. He was also a founding trustee of the Rockefeller Family Fund from 1967 to 1977.”
So not only was Laurance deeply involved in the financial industry, but he was also among the founders of the Rockefeller Brothers Fund and the Rockefeller Family Fund. These Funds are notorious for advancing globalist aims under the pretense of “philanthropy.” Laurance also served on the Rockefeller Brothers Fund’s Special Studies Project…
“From 1956 to 1960 the Fund financed an ambitious study conceived by its then president, Nelson Rockefeller, to ‘define the major problems and opportunities facing the U.S. and clarify national purposes and objectives, and to develop principles which could serve as the basis of future national policy’.
Nelson recruited Henry Kissinger, who was then on the faculty of Harvard University, as director of the project; he had first met Kissinger in 1955. He also brought on board such luminaries as Edward Teller, Charles Percy, Dean Rusk, John Gardner (president of the Carnegie Corporation) and Henry Luce, along with his brothers Laurance and John D. III. Seven panels were constituted that looked at sweeping issues ranging from military/security strategy to foreign policy, to international economic strategy and defense department and governmental reorganization.”
Of the Special Studies Project’s seven sub-panels, Laurance is specifically mentioned as having served on…
“Panel II – International Security Objectives and Strategy; directed by Henry Kissinger. Panellists included Frank Altschul, Gordon Dean, James B. Fisk, Roswell Gilpatric, Townsend Hoopes, Henry Luce, Laurance Rockefeller, Edward Teller, Carroll L. Wilson, and economist Arthur Smithies.”
The Special Studies Project’s Wikipedia page also had another paragraph that caught my eye…
“The project was finally published in its entirety in 1961 as Prospect for America: The Rockefeller Panel Reports. The archival study papers are stored in the Rockefeller Archive Center at the family estate; portions of the papers are still restricted, over four decades after the report was published.”
Upon reading this, I ordered a copy of Prospect for America, and it is exactly what I expected: a blueprint for using the United States as a tool to help build the New World Order. Here is a little snippet from page 35…
.

So as you can see, Laurance was deeply involved in pursuing the Rockefeller family’s globalist objectives. There was no rift or divergence of interests within the family (as is evidenced by the cooperation of the three brothers in the Special Studies Project); there was only a division of labor as they collectively worked to build the multilateral/multipolar New World Order.
Being an Illuminati family, the Rockefellers were/are involved in all three aspects of the UFO phenomenon: the black budget part, the government coverup part, and the public disclosure part. In pitting disclosure-demanding citizens against secrecy-maintaining governments, the “elite” are creating a conflict that will find resolution when the New World Order and Disclosure are publicly unveiled. At that time, the US government, the Paperclip Nazis, the Zionists, and the West will be blamed for the secrecy while the BRICS and the East will be credited with revealing the truth. UFO Disclosure is just another aspect of the West is Bad / East is Good propaganda effort being used to usher in the NWO.
Don’t Forget the Vatican
Of course, the globalist-directed Disclosure Movement isn’t run solely by the Rockefellers; the Vatican is involved too. In an entry titled The Vatican is preparing to introduce the Anunnaki to us, I showed how the Jesuits are working to prepare the public for the announcement of extraterrestrial life, and their preparations extend beyond merely revealing the existence of microbes on Mars. Have a look at what non-Jesuit Monsignor Corrado Balducci told the Italian public about UFOs and ETs…
. 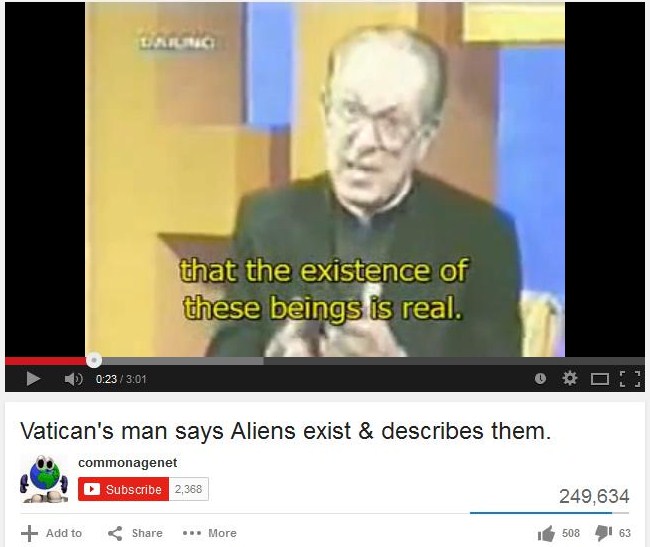 .…And here is another video where he talks about human-like extraterrestrials.
According to his bio…
“Monsignor Corrado Balducci (born May 11, 1923, in Italy; died September 20, 2008 in Italy) was a Roman Catholic theologian of the Vatican Curia, a close friend of the pope, a long-time exorcist for the Archdiocese of Rome, and a Prelate of the Congregation for the Evangelization of Peoples and the Society for the Propagation of the Faith. He has written several books about the subliminal messages in rock and metal music, diabolic possessions, and extraterrestrials. Monsignor Balducci often appeared on Italian TV to talk about satanism, religion, and extraterrestrials.”
Assuming this bio is genuine (I’m looking into it, and it has checked out so far), we see that belief in the reality of extraterrestrial spacecraft and beings has existed at the top level of the Vatican for a long time. Of course, since the Vatican is aligned with the traditionalist faction of the Anunnaki and is oriented towards worship of the Anunnaki god-king, it makes perfect sense that they believe in ETs, doesn’t it?

The Alien Card: How will the globalists play it?
It is clear that the globalist “elite” are inculcating the belief in benevolent extraterrestrials in the public mind. But why? From my current perspective, there are three ways they can play the alien card:
1) They are already playing it, and they are using UFOs and ETs to distract inquisitive people. If the globalists can get people to look up at the skies, no one will notice what is happening on the ground as the NWO unfolds. This is the most conventional way of looking at the UFO question.
2) They are preparing the public to accept a fake alien arrival. Instead of seeing real ETs arrive in real ET spacecraft, we’ll see genetically modified humans arriving in black budget aerospace craft. Given that scientists have been publicly cloning complex animals like sheep and genetically modifying goats to produce spider silk in their milk, is it so hard to believe that black budget science has produced a cloned, genetically modified human? If the globalists unleash upon the public a race of mind-controlled, mystery religion-indoctrinated hybrids flying antigravity craft, they can really play with people’s minds.
3) They are trying to generate public consent for an intrusion by real extraterrestrial / extradimensional beings. By getting people to believe that all our problems will be solved when the ET/EDs show up, they are building freewill permission for the ET/EDs to step in and run things. The globalists have built the multipolar NWO pyramid…
. 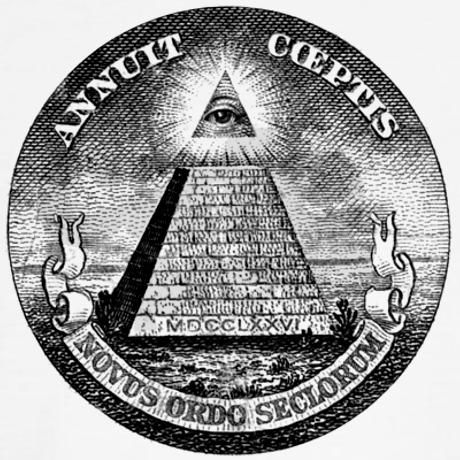 …so now the capstone (the Anunnaki) can float down and control the world.
I can’t yet say with certainty which of these three scenarios is in motion. We’ll just have to wait and see how weird things get.
There is more to write on this subject, but I’ll stop here and save the rest for a companion entry.
Till then, I send you my love… KEN
SOURCE
http://redefininggod.com/2014/10/why-are-the-rockefellers-and-the-jesuits-guiding-the-ufo-disclosure-movement/