Written by Dr Michael Salla on November 7, 2014. Posted in exonews 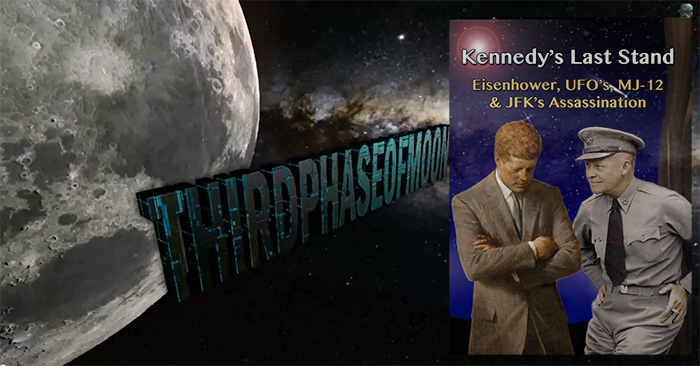 The upcoming 51st anniversary of President Kennedy’s assassination and its connection to classified UFO files is discussed in a new video released by Third Phase of Phase on November 6. The video, “UFO Sightings MJ-12: The Presidents Last Stand,” proposes the general public is opening up for the first time to the possibility that Kennedy had a genuine interest in UFOs and that this played a role in his assassination. Using historic documents – both those released through the Freedom of Information Act and those leaked unofficially by whistleblowers – it is proposed that Kennedy tried a number of different initiatives to gain access to classified UFO files. With a subscriber base of almost 200,000, the Third Phase of Moon video introduces a radical new perspective on the Kennedy Assassination to the US and world public.
The Third Phase of Moon video uses a combination of new film footage taken on the Big Island of Hawaii with the writer wherein my 2013 book, Kennedy’s Last Stand is discussed, and archived footage of a 2009 lecture wherein documents concerning Kennedy’s efforts to gain access to classified UFO files are discussed. The video begins by discussing President Kennedy’s experiences in Post War Germany where he was a guest of the U.S. Secretary of Navy, James Forrestal, and toured captured Nazi UFO technologies. Kennedy’s war time knowledge of UFOs played a key role in his interest in gaining access to classified UFO files closely safeguarded by the CIA’s counter intelligence division, and a secretive organization called Majestic-12.
Kennedy’s efforts to do an end run against the CIA’s refusal to share classified UFO files is discussed, along with his efforts to gain access using his Commander in Chief powers when visiting U.S. military facilities. It is claimed that Kennedy shared some of the UFO secrets he had discovered with Marilyn Monroe. Monroe’s estrangement from Kennedy and attempt to reveal his UFO secrets through a planned Press Conference, is claimed to have played a direct role in her August 1962 death.
The Third Phase of Moon video finishes with Kennedy’s historic September 20, 1963 initiative announced at the United Nations General Assembly to collaborate with the Soviet Union in joint space and lunar missions. It is proposed that Kennedy’s space cooperation initiative was driven by a desire to have classified UFO files shared between the respective bureaucracies of the US and USSR. This would have eventually ensured direct Presidential access to classified UFO files and programs. When it became clear on 12 November 1963 – after Soviet Premier Khrushchev finally accepted Kennedy’s space cooperation initiative – that Kennedy might succeed, a secret assassination directive called “Project Environment,” was implemented by the head of the CIA’s counter intelligence division. Ten days later, President Kennedy was assassinated in Dallas, Texas.

» Alleged classified UFO video released by fake news channel
» This Single Paragraph From the JFK Assassination Files Changes Everything
» The One Paragraph You Need to Read from the JFK Assassination Files That May Change Everything
» Finally! Leaked Classified Ultra Top Secret UFO Files! Roswell Crash BUSTED? And Much More 2017
» Classified Phoenix Lights Footage