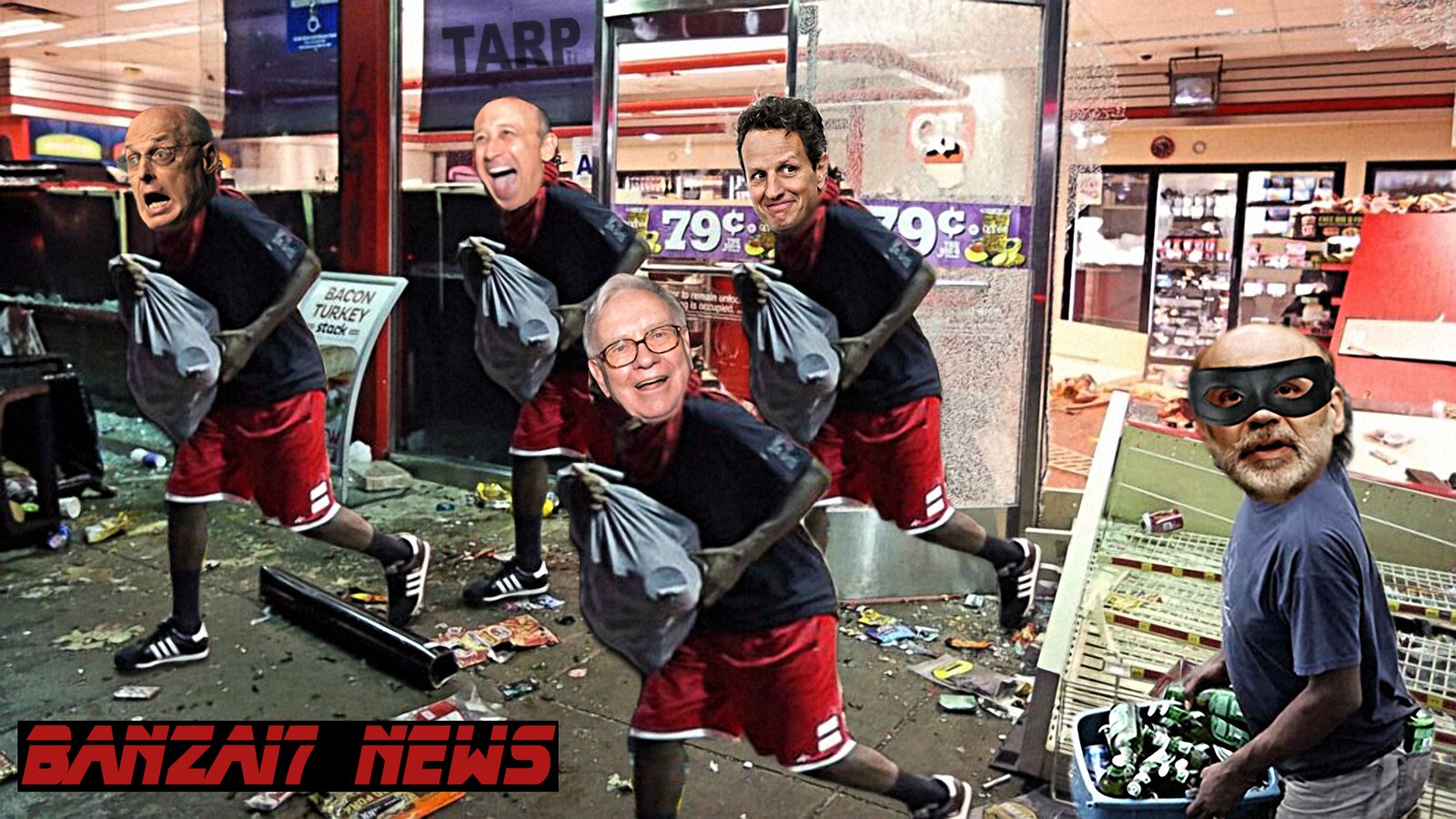 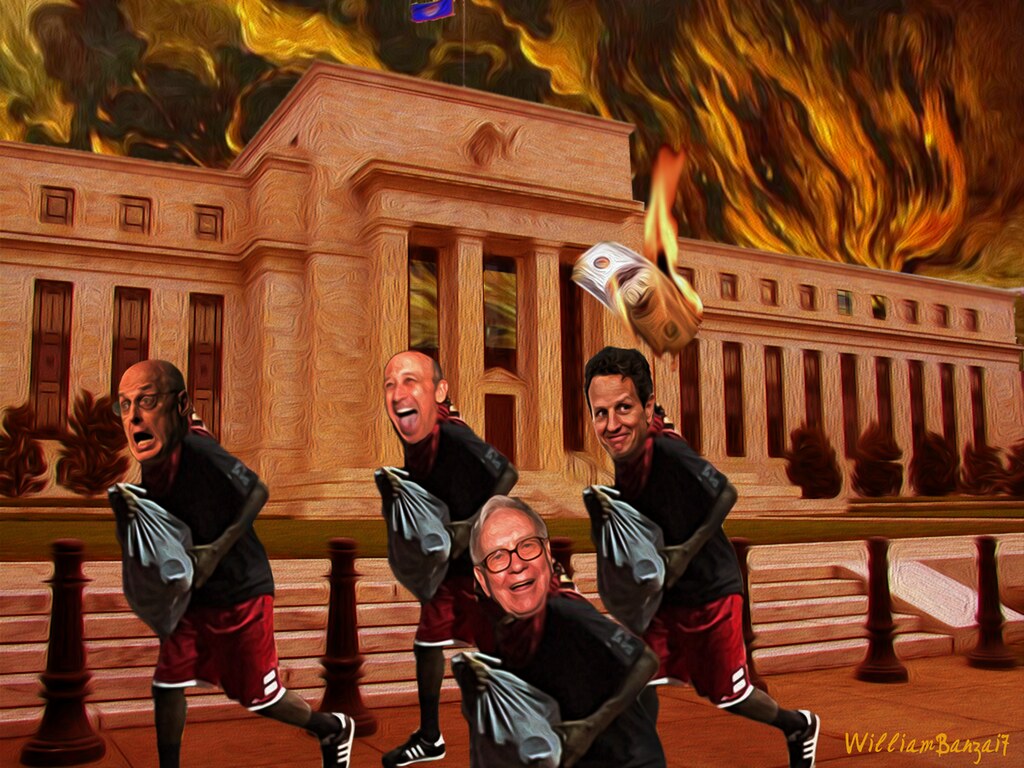 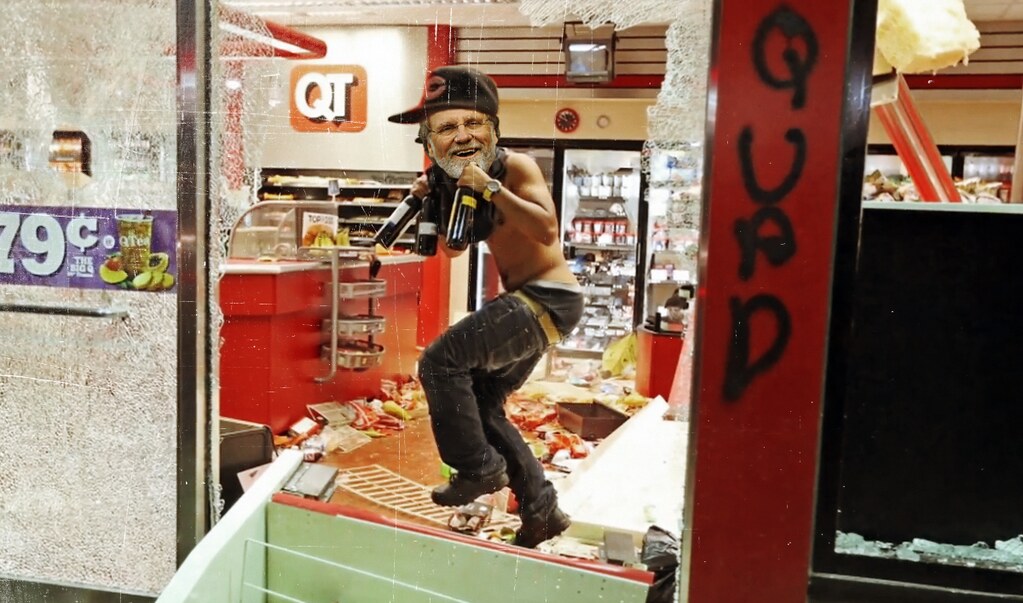 Images by William Banzai ... OBVIOUSLY!
The looting in Ferguson, Missouri is bad.    The looters are giving the peaceful protesters against the shooting of Michael Brown a bad name, and provoking an armed (and over-militarized) response by the police.
But let’s put things in perspective …
Wall Street’s crimes and fraud have cost the economy tens of trillions of dollars.
The big banks are still engaged mind-blowing levels of manipulation and crime.
Nobel prize winning economist Joe Stiglitz and well-known economist Nouriel Roubini say that we’ve got to jail – or perhaps even hang – some bankers before they’ll stop looting the economy.
Nobel prize winning economist George Akerlof has demonstrated that failure to punish white collar criminals – and instead bailing them out- creates incentives for more economic crimes and further destruction of the economy in the future.
We explained in 2009:

As Examiner.com pointed out in May (it is worth quoting the essay at some length, as this is an important concept), looting has replaced free market capitalism:

Nobel prize-winning economist George Akerlof co-wrote a paper in 1993 describing the causes of the S&L crisis and other financial meltdowns. As summarized by the New York Times:

In the paper, they argued that several financial crises in the 1980s, like the Texas real estate bust, had been the result of private investors taking advantage of the government. The investors had borrowed huge amounts of money, made big profits when times were good and then left the government holding the bag for their eventual (and predictable) losses.

In a word, the investors looted. Someone trying to make an honest profit, Professors Akerlof and Romer
[co-author of the paper, and himself a leading expert on economic growth] said, would have operated in a completely different manner. The investors displayed a “total disregard for even the most basic principles of lending,” failing to verify standard information about their borrowers or, in some cases, even to ask for that information.

The investors “acted as if future losses were somebody else’s problem,” the economists wrote. “They were right.”

The Times does a good job of explaining the looting dynamic:

The paper’s message is that the promise of government bailouts isn’t merely one aspect of the problem. It is the core problem.

Promised bailouts mean that anyone lending money to Wall Street — ranging from small-time savers like you and me to the Chinese government — doesn’t have to worry about losing that money. The United States Treasury (which, in the end, is also you and me) will cover the losses. In fact, it has to cover the losses, to prevent a cascade of worldwide losses and panic that would make today’s crisis look tame.

But the knowledge among lenders that their money will ultimately be returned, no matter what, clearly brings a terrible downside. It keeps the lenders from asking tough questions about how their money is being used. Looters — savings and loans and Texas developers in the 1980s; the American International Group, Citigroup, Fannie Mae and the rest in this decade — can then act as if their future losses are indeed somebody else’s problem.

Do you remember the mea culpa that Alan Greesnspan, Mr. Bernanke’s predecessor, delivered on Capitol Hill last fall? He said that he was “in a state of shocked disbelief” that “the self-interest” of Wall Street bankers hadn’t prevented this mess.

He shouldn’t have been. The looting theory explains why his laissez-faire theory didn’t hold up. The bankers were acting in their self-interest, after all…Think about the so-called liars’ loans from recent years: like those Texas real estate loans from the 1980s, they never had a chance of paying off. Sure, they would deliver big profits for a while, so long as the bubble kept inflating. But when they inevitably imploded, the losses would overwhelm the gains…

What happened? Banks borrowed money from lenders around the world. The bankers then kept a big chunk of that money for themselves, calling it “management fees” or “performance bonuses.” Once the investments were exposed as hopeless, the lenders — ordinary savers, foreign countries, other banks, you name it — were repaid with government bailouts.

In effect, the bankers had siphoned off this bailout money in advance, years before the government had spent
it…Either way, the bottom line is the same: given an incentive to loot, Wall Street did so. “If you think of the financial system as a whole,” Mr. Romer said, “it actually has an incentive to trigger the rare occasions in which tens or hundreds of billions of dollars come flowing out of the Treasury.”

In fact, the big banks and sellers of exotic instruments pretended that the boom would last forever, siphoning off huge profits during the boom with the knowledge that – when the bust ultimately happened – the governments of the world would bail them out.

As Akerlof wrote in his paper:

[Looting is the] common thread [when] countries took on excessive
foreign debt, governments had to bail out insolvent financial institutions, real estate prices increased dramatically and then fell, or new financial markets experienced a boom and bust…Our theoretical analysis shows that an economic underground can come to life if firms have an incentive to go broke for profit at society’s expense (to loot) instead of to go for broke (to gamble on success). Bankruptcy for profit will occur if poor accounting, lax regulation, or low penalties for abuse give owners an incentive to pay themselves more than their firms are worth and then default on their debt obligations.

Indeed, Akerlof predicted in 1993 that the next form the looting dynamic would take was through credit default swaps – then a very-obscure financial instrument (indeed, one interpretation of why CDS have been so deadly is that they were the simply the favored instrument for the current round of looting).

Is Looting A Thing of the Past?

Now that Wall Street has been humbled by this financial crash, and the dangers of CDS are widely known, are we past the bad old days of looting?

Unfortunately, as the Times points out, the answer is no:

At a time like this, when trust in financial markets is so scant, it may be hard to imagine that looting will ever be a problem again. But it will be. If we don’t get rid of the incentive to loot, the only question is what form the next round of looting will take.

Indeed, one of America’s top experts on white collar fraud – the senior S&L prosecutor who put more than 1,000 top executives in jail for fraud (Bill Black)- says that we’ve known for “hundreds of years” that failure to punish white collar criminals creates incentives for more economic crimes and further destruction of the economy in the future. And see this, this, this and this.
Review of the data on accounting fraud confirms that fraud goes up as criminal prosecutions go down. Indeed, extensive evidence shows that failing to prosecute looting by Wall Street is killing our economy.
And yet the U.S. government admits that it refuses to prosecute fraud … pretty much as an official policy. Indeed, the government helped cover up the crimes of the big banks, used claims of national security to keep everything in the dark, and changed basic rules and definitions to allow the game to continue. See this, this, this and this.
Indeed, Wall Street – with the help of Washington – has robbed (and raped) America.


The Fish Is Rotting from the Head Down

Moreover, corruption at the top leads to lawlessness by the people. As we noted in 2011, in the middle of the London riots:

The criminality in our streets cannot be dissociated from the moral disintegration in the highest ranks of modern British society. The last two decades have seen a terrifying decline in standards among the British governing elite. It has become acceptable for our politicians to lie and to cheat. An almost universal culture of selfishness and greed has grown up.

It is not just the feral youth of Tottenham who have forgotten they have duties as well as rights. So have the feral rich ….

The so-called feral youth seem oblivious to decency and morality. But so are the venal rich and powerful – too many of our bankers, footballers, wealthy businessmen and politicians.

The sad young men and women, without hope or aspiration … have caused such mayhem and chaos over the past few days. But the rioters have this defence: they are just following the example set by senior and respected figures in society. Let’s bear in mind that many of the youths in our inner cities have never been trained in decent values. All they have ever known is barbarism. Our politicians and bankers, in sharp contrast, tend to have been to good schools and universities and to have been given every opportunity in life.

Something has gone horribly wrong in Britain. If we are ever to confront the problems which have been exposed in the past week, it is essential to bear in mind that they do not only exist in inner-city housing estates.

The culture of greed and impunity we are witnessing on our TV screens stretches right up into corporate boardrooms and the Cabinet. It embraces the police and large parts of our media. It is not just its damaged youth, but Britain itself that needs a moral reformation.

Osborne also gives specific examples of corruption, such as the prime minister’s involvement in the Murdoch scandal, and members of parliament abusing expense accounts.

Indeed, the rioters themselves agreed. As Reuters notes:

Speaking to Reuters late on Tuesday, looters and other local people in east London pointed to the wealth gap as the underlying cause, also blaming what they saw as police prejudice and a host of recent scandals.

Spending cuts were now hitting the poorest hardest, they said, and after tales of politicians claiming excessive expenses, alleged police corruption and bankers getting rich it was their turn to take what they wanted.

“They set the example,” said one youth after riots in the London district of Hackney. “It’s time to loot.”

As Max Keiser noted at the time, harshly cracking down on British youth looting a $1 bottle of water or a candy bar while letting the financial looters go free is hypocritical.
As we noted in 2011, failing to prosecute financial fraud – on either side of the Atlantic – is extending the economic crisis. In 2012, we pointed out that European (and American) governments were encouraging bank manipulation and fraud to cover up insolvency … trying to put lipstick on a pig.
As a result, Europe is still in a depression … and America has the highest levels of inequality in history. And that’s killing our economy.
Postscript: Perverse money incentives are what led to the distrust in  Ferguson police in the first place.