Why We Should All Get Rid Of Our Microwave Ovens 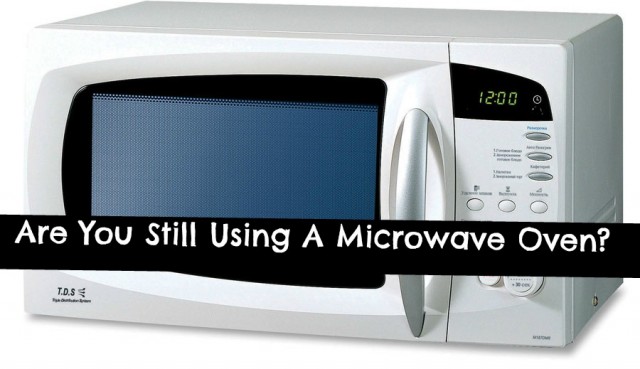 Over 90% of American homes have microwave ovens used for meal preparation.
Microwave ovens, originally sold as “Radaranges,” use technology that passes electromagnetic waves through food, exciting the molecules and causing them to move and heat up as they respond to the microwave radiation.

Microwaves are electromagnetic energy that travel at the speed of light. The magnetron in the microwave oven produces wave energy. This wave energy converts polarity of molecules from positive to negative. This polarity changes millions of times every second in the microwave oven. These microwaves bombard the food molecules and makes the polarized molecules to radiate at the same frequency millions of times every second. This friction heats up the food and also causes ‘structural isomerism’, that is, structural damage of the food molecules.
A Swiss study led by biologist and food scientist Dr. Hans Hertel identified the effects of microwaved food. For eight weeks, eight people lived in a controlled environment and intermittently ate raw foods, conventionally cooked foods and microwaved foods. Blood samples were tested after each meal. The microwaved food caused significant changes in blood chemistry.
Hans Hertel, a Swiss scientist, states:

“There are no atoms, molecules or cells of any organic system able to withstand such a violent, destructive power for any extended period of time, not even in the low energy range of milliwatts… This is how microwave cooking heat is generated – friction from this violence in water molecules. Structures of molecules are torn apart, molecules are forcefully deformed (called structural isomerism) and thus become impaired in quality.”

You might wonder why food is often unevenly heated when taken out of the microwave. The uneven heating occurs because microwaves work with whatever water molecules are present, and since not all areas of food contain the same amount of water, heating becomes uneven.
Another study at Stanford University investigated the effects of microwaving breast milk. One of the head scientists said “Microwaving human milk, even at a low setting, can destroy some of its important disease-fighting capabilities.” They claimed that besides heating, there were many other disturbing alterations in the milk
In early 1991, a lawsuit was filed against an Oklahoma hospital after a patient died from receiving blood that was heated in a microwave oven.
In Russia, microwave ovens were banned in 1976 because of their negative effect on health and wellbeing.

In Comparative Study of Food Prepared Conventionally and in the Microwave Oven, published by Raum & Zelt in 1992, it states:
“Production of unnatural molecules is inevitable. Naturally occurring amino acids have been observed to undergo isomeric changes (changes in shape morphing) as well as transformation into toxic forms, under the impact of microwaves produced in ovens. One short-term study found significant and disturbing changes in the blood of individuals consuming microwaved milk and vegetables. Eight volunteers ate various combinations of the same foods cooked different ways. All foods that were processed through the microwave ovens caused changes in the blood of the volunteers. Hemoglobin levels decreased and overall white cell levels and cholesterol levels increased. Lymphocytes decreased. Luminescent (light-emitting) bacteria were employed to detect energetic changes in the blood. Significant increases were found in the luminescence of these bacteria when exposed to blood serum obtained after the consumption of microwaved food.”
The bottom line is that microwaves cause cancer and other diseases. They destroy the goodness in our food and weaken our bodies. Ultimately, we should all be thinking about permanently getting rid of them.

I think I need to toss that sucker out! LOL

» MICROWAVE WEAPONS ARE BEING USED AGAINST CIVILIANS, IN THE UK AND US 1
» Microwave Test – an eye opener
» Microwave Transmitter Amidst Chemtrails
» CIA agents attacked by 'microwave weapon'
» A “Whistleblower” Blows The Lid Off Microwave Towers