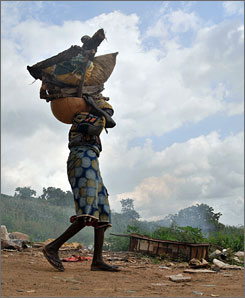 LONDON (AP) — Polio, a dreaded paralyzing disease stamped out in the industrialized world, is spreading in Nigeria despite efforts to stamp it out. And health officials say in some cases, it's caused by the vaccine used to fight it.
In July, the World Health Organization issued a warning that this vaccine-spread virus might extend beyond Africa. So far, 124 Nigerian children have been paralyzed this year — about twice those afflicted in 2008.

The polio problem is just the latest challenge to global health authorities trying to convince wary citizens that vaccines can save them from dreaded disease. For years, myths have abounded about vaccines — that they were the Western world's plan to sterilize Africans or give them AIDS. The sad polio reality fuels misguided fears and underscores the challenges authorities face using a flawed vaccine.

Nigeria and most other poor nations use an oral polio vaccine because it's cheaper, easier, and protects entire communities.

But it is made from a live polio virus — albeit weakened — which carries a small risk of causing polio for every million or so doses given. In even rarer instances, the virus in the vaccine can mutate into a deadlier version that ignites new outbreaks.

The vaccine used in the United States and other Western nations is given in shots, which use a killed virus that cannot cause polio.

So when WHO officials discovered a polio outbreak in Nigeria was sparked by the polio vaccine itself, they assumed it would be easier to stop than a natural "wild" virus.

In 2007, health experts reported that amid Nigeria's ongoing outbreak of wild polio viruses, 69 children had also been paralyzed in a new outbreak caused by the mutation of a vaccine's virus.

Back then, WHO said the vaccine-linked outbreak would be swiftly overcome — yet two years later, cases continue to mount. They have since identified polio cases linked to the vaccine dating back as far as 2005.

It is a worrying development for officials who hope to end polio epidemics in India and Africa by the end of this year, after missing several earlier deadlines. "It's very disturbing," said Dr. Bruce Aylward, who heads the polio department at the World Health Organization.

This year, the number of polio cases caused by the vaccine has doubled: 124 children have so far been paralyzed, compared to 62 in 2008, out of about 42 million children vaccinated. For every case of paralysis, there are hundreds of other children who don't develop symptoms, but pass on the disease.

When Nigerian leaders suspended polio vaccination in 2003, believing the vaccine would sterilize their children and infect them with HIV, Nigeria exported polio to nearly two dozen countries worldwide, making it as far away as Indonesia.

Nigeria resumed vaccinations in 2004 after tests showed the vaccine was not contaminated with estrogen, anti-fertility agents or HIV.

Experts have long believed epidemics unleashed by a vaccine's mutated virus wouldn't last since the vaccine only contains a weakened virus strain — but that assumption is coming under pressure. Some experts now say that once viruses from vaccines start circulating they can become just as dangerous as wild viruses.

"The only difference is that this virus was originally in a vaccine vial," said Olen Kew, a virologist at the U.S. Centers for Disease Control and Prevention.

The oral polio vaccine used in Nigeria and elsewhere contains a mild version of the live virus. Children who have been vaccinated pass the virus into the water supply through urine or feces. Other children who then play in or drink that water pick up the vaccine's virus, which gives them some protection against polio.

But in rare instances, as the virus passes through unimmunized children, it can mutate into a strain dangerous enough to ignite new outbreaks, particularly if immunization rates in the rest of the population are low.

Though Nigeria's coverage rates have improved, up to 15% of children in the north still haven't been vaccinated against polio. To eradicate the disease, officials need to reach about 95% of the population.

Nigeria's vaccine-linked outbreak underlines the need to stop using the oral polio vaccine as soon as possible, since it can create the very epidemics it was designed to stop, experts say. WHO is researching other vaccines that might work better, but none is on the horizon.

Until a better vaccine is ready, WHO and U.S. CDC officials say the oral vaccine is the best available tool to eradicate polio and that when inoculation rates are nearly 100% it works fine.

"Nigeria is almost a case study in what happens when you don't follow the recommendations," Kew said.

Since WHO and partners began their attempt to rid the world of polio in 1988, officials have slashed the disease's incidence by more than 99%.

But numerous deadlines have been missed and the number of cases has been at a virtual standstill since 2000. Critics have also wondered whether it is time to give up, and donors may be sick of continuing to fund a program with no clear endgame.

"Eradication is a gamble," said Scott Barrett, an economist at Columbia University who has studied polio policies. "It's all or nothing ... and there is a very real risk this whole thing may fall apart."

Aside from Nigeria, polio persists in a handful of other countries, including Afghanistan, Pakistan, India, Chad, Angola and Sudan.

Aylward agreed the Nigeria situation was another unwelcome hurdle, but was confident eradication was possible. "We still have a shot," he said. "We're throwing everything at it including the kitchen sink."

Copyright 2009 The Associated Press. All rights reserved. This material may not be published, broadcast, rewritten or redistributed.