“History is written by the victors.” – Winston Churchill

History is a wonderful and sometimes crucial aspect of reality that can give us key insight into where we have been -and where we are going.

Throughout the ages, time and time again; humans have been lied to.

Whether it be aristocracy, royalty, oppressive regimes or a slew of other tyrants humans have been fed time and time again fabricated lies to suit the agenda of these parties.

But is that period truly over? 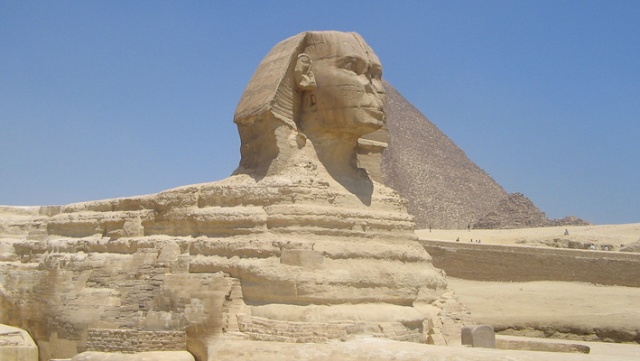 There are many holes in the fabric of mainstream history such as a map found in 1513 by Piri Reis, a famous admiral of the Turkish fleet in the sixteenth century.

It depicts Antarctica as ice free as well as the coastlines of the Americas – this should be impossible. 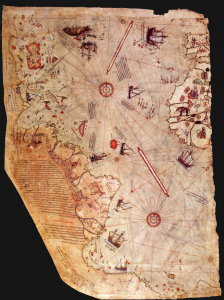 Piri Reis’ Impossible Map
According to mainstream history this should not be in existence as Antarctica apparently has had ice on it for millions of years; apparently. The map also uses mathematics as well as the longitude and latitude system which Professor Charles Hapgood has investigated and confirmed despite there being no such system at the time.

Which is detailed in his book Maps of the Ancient Sea Kings, it has also been shown that there was an advanced worldwide civilization thousands of years before ancient Egypt.

Before we enter this aspect of the information, I will tell you mainstream “history’s” view of the birth human civilization: It spontaneously appeared out of nowhere in an ancient empire known as Sumer roughly 6,000 years ago, Sumer was located in present day Iraq.

Archeologist Peter Beaumont has provided solid evidence that there was advance gold mining in Swaziland, in southern Africa 50,000 years ago. 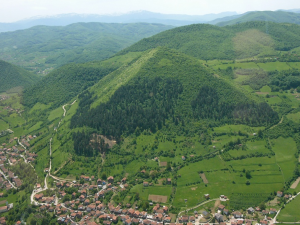 Pyramid of the Sun
In the Ancient Ruins of Rhodesia by R.N. Hall and W.G. Neal, they prove that the people of South Africa were worshiping the same god as the Pheonicians known as Baal. Which basically means that there was one advanced civilization that spanned all the way to the south of ancient Africa. The Pheonicians also traveled and operated far beyond the establishment view of only Northern Africa.

Author and explorer Semir Osmanagic discovered pyramids in Bosnia that have been measured by scientists to be over 25,000 years old. Semir has been viciously persecuted by Egyptologists who are desperate to maintain their prestige as well as the official narrative of history it seems. How could this have happened if humanity’s first civilization appeared only 6,000 years ago?

These pyramids are also massive in size and age when compared to the lesser “Great” Pyramids of Giza. Egyptologists ludicrously claim these are “hills” – despite physicist Slobodan Mizrak recording high electromagnetic intervals at the tips of these pyramids that do not occur naturally. 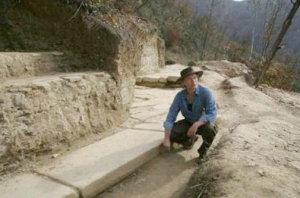 Clearly “natural”
Archaeologists have entered the pyramids and concrete taken from there has been tested independently by Italy’s Polytechnic University of Turin. PUT is a leading Italian institution and they found the construction material is 5 times stronger than any concrete they’ve ever analyzed. Yet mainstream history says these are just “hills”??(image source)

I personally can’t believe this, but in actual fact they are desperately trying to hold this “truth” together; miserably in my opinion.

The Great Sphinx of Giza has 15,000 thousand years of water erosion on its surface when it is in one of the driest places in the world. Once again how could this be if the first civilization was 6,000 years ago? 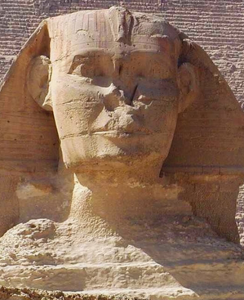 Water Erosion Older Than the Sphinx 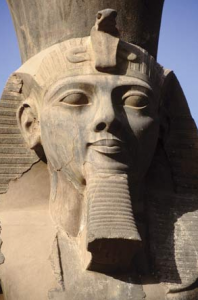 Statue of Ramses II
The statue of Ramses II located in Luxor, Egypt, is made out of red granite which has a number of 7 on the Mohs mineral hardness scale; that is a density level of quartz crystal. 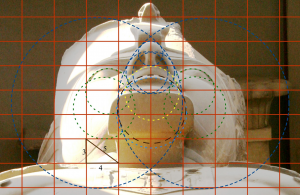 Ancient Knowledge via Hand-Tools?
Mainstream history wants you to believe that ancient Egyptians carved a perfectly symmetrical face into some of the hardest stone known to man using primitive hand tools. The statue not only has a precisely mirrored face, it also was manifested with Pythagorean Triangle, the Golden Rectangle and Golden Triangle in mind and this can be measured on the face. Basically in “laymen” terms this statue has been encoded with sacred geometry; knowledge universally recorded by the ancients. It has advanced mathematics threaded within the very design of the face.

Archaeologist Christopher Dunn spent well over 30 years of thorough research documenting and presenting evidence that the Egyptians could not have made these monoliths (and so much more) with mainstream history’s “explanation.” Dunn concluded after decades of research that they had to have had advanced technology to create these elaborate structures.

The Broken Hill Skull w/ Bullet Wound On Second Slide
In 1922, near Broken Hill, Rhodesia (now Zimbabwe) a skull of a “Neanderthal” (actually Homo Heidelbergensis a distant cousin of Neanderthal and Homo Erectus from Africa) was found with a bullet hole in its head. The species is estimated to be 120-300 thousand years old and this skull was found 60 feet below the surface.

There have also been ancient, extinct animals found with bullet holes in them. This particular animal is an extinct cousin of the bison that once lived in Europe thousands of years ago, it was known as the auroch. This particular auroch skull was recovered in the Lena River in Russia, and it survived the wound because the edge has been calcified. 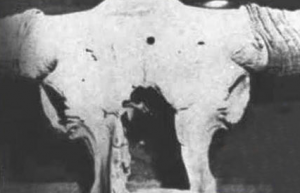 Auroch Skull w/ Bullet-Hole in Forehead
Recently, a phenomenal structure was discovered in South-East Turkey near the city of Sunliurf. Named Gobekli Tepe, it is primarily circular structures on top of a hill. There are T-shaped pillars that weigh up to 20 tons and are decorated with carved animals. 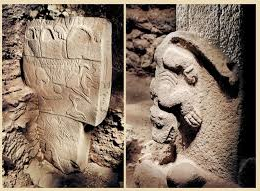 Animals of Gobekli Tepe
The site is estimated to be at least 12,000 years old and perhaps older. The German and Turkish archeologists found via geomagnetic surveys that there are also hundreds more buried. So not only do these ruins predate Stonehenge, they were also intentionally buried and that is why they are preserved so well. The archeologists asked how could primitive people have done this with hand tools? Exactly. 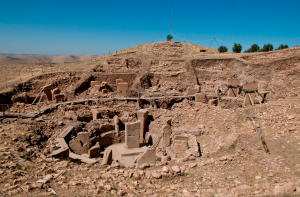 The Amazing Gobekli Tepe
In the Khakasis region of Russia there are mines in the town of Chernogorodskiy, where a lump of coal containing a machined metal gear was found. This lump of coal had the gear embedded in it – the coal is 300-million years old. Researchers who analyzed the gear observed it was…

“very much like a toothed metal rail, created artificially. It was like parts [that] are often used in microscopes, various technical and electronic devices,”

Geologists also discovered … “[It] was found to be composed of 98 percent aluminum and 2 percent magnesium,” which led to the implication that the metallic object was created artificially.

A more “mild” example is what many are taught within public “education” as well as almost everywhere else. It is that the American Civil War fought in the United States from 1861 to 1865 was over slavery. That, to me, is also a blatant lie. 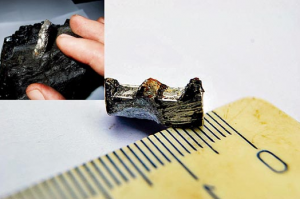 The Mysterious Metal Gear
The truth is that Lincoln’s Emancipation Proclamation only freed slaves in the rebelling states so over 1 million slaves in the Northern states were still slaves. Two of the Union states were slaves states and the war was over unfair taxes and constricting tariffs and was far more complicated than the insulting “moral” story of saving the slaves from the “bad” Confederacy. This same theme can be easily applied to World War II. United States based corporations such as GM and Ford helped the Nazis in their efforts to invade several countries while arming the United States with tanks and an assortment of other arms.

Here is a quick list of things I’ve found that we were lied to about “history”:

All of these obviously contradicting mainstream history; are but a fraction of mysteries that do. The point I’m making is that history is not what you have been lead to believe it is. I am intending to tease open your mind to explore more, and consider ideas outside the “box” we have been given.

I would also like to address that my whole entire point of this article is to show that you should always question the status quo; and should never be fearful to do so. These establishments should always be questioned in my opinion:

So there are aspects of this world that are awash with mystery. This to me is very magical, as it opens the door to something more. History is a great start but what really matters is right now. If there is still unknown being fed from the past – then it is still here today. The most wonderful thing about the unknown to me is that perhaps there is more, and this more is unlimited with its possibilities.

Thank you for reading I hope you gained new insight into the past as well as right now.