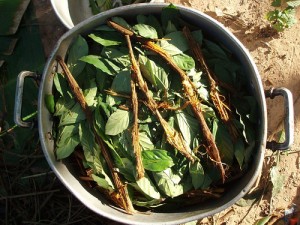 Ayahuasca is an ancient psychedelic plant medicine that has been used by shamans in South America for centuries. It is a brew that is made by boiling the leaves and vines of specific plants from the amazonian jungle. Today, this plant has been starting to make its way into Western culture and is being used to treat people with a variety of ailments that include depression and addiction. More recently the plant medicine is being studied as a potential treatment to fight cancer. Even though in the United States Dimethyltryptamine (DMT)  is highly illegal and is considered as a Schedule I drug by the U.S. Controlled Substances Act and the International Convention on Psychotropic Substances.
Eduardo E. Schenberg, who works for the Federal University of Sao Paulo, believes that the healing powers that come from ayahuasca usage deserve some attention from the scientific community, especially when it comes to cancer.

“There is enough available evidence that ayahuasca’s active principles, especially DMT (N-dimethyltryptamine) and harmine, have positive effects in some cell cultures used to study cancer, and in biochemical processes important in cancer treatment, both in vitro and in vivo, therefore the few available reports of people benefiting from ayahuasca in their cancer treatment experiences should be taken seriously, and the hypothesis presented here, fully testable by rigorous scientific experimentation, helps to understand the available cases paving the way for new experiments.” Schenburg wrote in an article that was published in Sage Open Medicine.

Unfortunately documented sources for this claim are very rare. There have been a few scientific studies done, but not enough to show conclusive evidence.  Most of these claims are coming from word of mouth, which obviously isn’t enough to say that it is an effective cure, but it is definitely enough to consider. More research definitely needs to be done on the subject.  Schenburg also wrote:

In summary, it is hypothesized that the combined actions of β-carbolines and DMT present in ayahuasca may diminish tumor blood supply, activate apoptotic pathways, diminish cell proliferation, and change the energetic metabolic imbalance of cancer cells, which is known as the Warburg Effect. Therefore, ayahuasca may act on cancer hallmarks such as angiogenesis, apoptosis, and cell metabolism.

Depending on how you look at this, it might be easy to understand how taking ayahuasca could assist with the treatment of curing cancer. Ayahuasca helps its users to let go and release baggage in their lives that they have been holding onto for a long time, these various experiences could have caused stress in their lives. It is pretty common knowledge nowadays that stress is a contributing factor to many different ailments, so if the ayahuasca can assist these people of ridding of depression and stress, there is a possibility that the cancer will go away along with it.  Having done ayahuasca myself, I can safely say that this medicinal plant does wonders for your mental health, and brings about new clarity and a more peaceful state of mind.
To some people it may sound absurd that a psychedelic plant that gets you ‘high’ could even be considered as an option for a cancer cure, but more and more natural alternatives have been gaining popular in recent years. A  study that was done in 2003 stated that chemotherapy is only effective 2.1% of the time. With statistics like that you would think that we would be testing everything that is natural for potential healing benefits.
To learn more about this sacred plant medicine please check out the following links:
http://www.collective-evolution.com/2013/03/07/ayahuasca-a-new-approach-to-western-medicine/
http://www.collective-evolution.com/2013/11/28/my-adventure-with-ayahuasca-the-vine-of-the-soul/
Sources:
http://iceers.org/science-interest-ayahuasca.php#.UvGTmEKQOaK
http://smo.sagepub.com/content/1/2050312113508389.full
http://www.rawstory.com/rs/2014/01/27/scientist-says-psychedelic-brew-consumed-by-amazonian-shamans-could-fight-cancer/