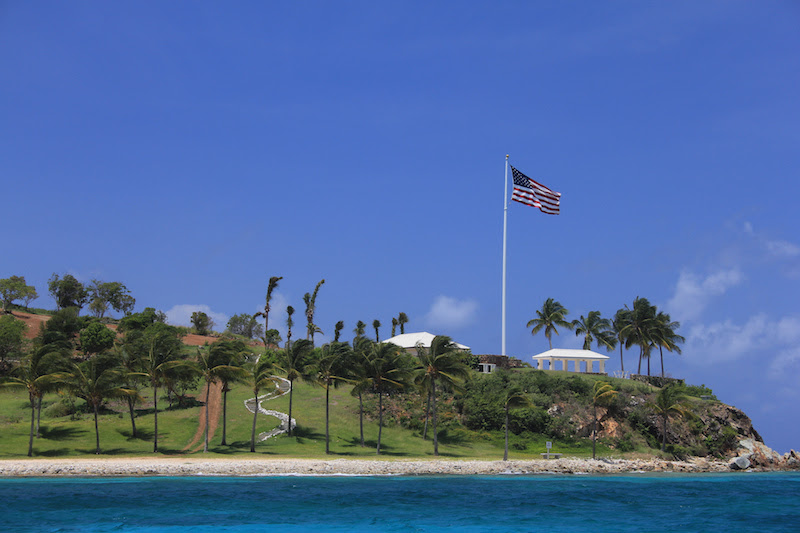 LITTLE ST. JAMES, U.S. Virgin Islands (INTELLIHUB.COM) — If you can name it — it has likely taken place on the lavish private island off the coast of Florida which boasts a beautifully landscaped plush luxury estate complete with its own helipad, privy only to certain members of the global elite.
Owned by Jeffery Epstein, a wealthy American financier and convicted sex offender, Little St. James Island appears to be somewhat of a gathering place and is a well desired hangout among key figureheads, actors, and royalty to the likes of former U.S. President Bill Clinton, Kevin Spacey, and even Prince Andrew.
However, the people attending the lavish residence are likely not there to discuss “cutting edge scientific and medical research” as the Epstein VI Foundation would like you to believe, but rather experience full-on sexual encounters with underage girls as young as fourteen.
That’s right, just like a scene out of the Hollywood blockbuster film Eyes Wide Shut, starring Tom Cruise, from wild parties to prostitution, orgies, and even underage sex, Little St. James has it all, seemingly a gathering point frequented by prominent jet-setters, and it’s all being exposed. The cat is out of the bag so to speak.
Back in 2005 police conducted an 11 month-long undercover investigation on Jeffery Epstein and his estate after the mother of a 14-year-old girl went to police after suspecting her daughter was paid $300 for at least one sexual act on the island in which she was ordered to strip, leaving on just her panties while giving Epstein a massage.
Although police found tons of photos of young women on the island and even interviewed eyewitnesses, Epstein was hit with a mere slap on the wrist after “pleading to a single charge of prostitution”. Epstein later served 13-months of his 18-month service in jail.
In 2008 Epstein was hit again, this time with a $50 million civil suit after another victim, a woman, filed in a federal court claiming that she was “recruited” by Epstein to give him a “massage” but was essentially forced into having sexual intercourse with him for $200 which was payable upon completion. The women were coming out of the woodwork.
Now Bill Clinton is back in the press and not for his controversial relationship with Monica Lewinsky, but rather his friendship with Jeffery Epstein. In fact, flight records indicate that Bill would frequent the island paradise during the 2002 and 2005 era while Hillary, Bill’s wife, was a Senator in New york.
‘I remember asking Jeffrey what’s Bill Clinton doing here kind of thing, and he laughed it off and said well he owes me a favor,’ one unidentified woman said in the lawsuit, which was filed in Palm Beach Circuit Court.
The woman went on to say how orgies were a regular occurrence and she recalled two young girls from New York who were always seen around the five-house compound but their personal backstories were never revealed.
“At least one woman on the compound was there unwillingly”, reported the Daily Mail in a recent article. The woman was allegedly forced to have sex with “politicians, businessmen, royalty, academicians” at the retreat. Just one of  “more than 40 women” that have come forth with claims against Epstein, showing the vast scale of the man’s dark operations, which aren’t limited only to Little St. James.
Moreover Epstein was invited to Chelsea Clinton’s wedding in 2010 amongst 400 other guests, demonstrating his close friendship with the Clinton family.
To top it all off blue blood Prince Andrew was allegedly one of the house’s visitors. On Friday, the Duke of York was named in a federal lawsuit filed against Epstein, whom the FBI once reportedly linked to 40 young women. Filed in 2008 in the Southern District of Florida, the $50 million lawsuit claimed Epstein had a “sexual preference and obsession for underage minor girls … gained access to primarily economically disadvantaged minor girls in his home, sexually assaulted these girls.”, as reported by the Washington Post.
Additionally it was also reported that Donald Trump used to hangout with Epstein back in the day. In fact the Trumpanator himself has even commented previously on Epstein’s taste for “younger” women also pointing out that Epstein “is fun” to be around.
While it’s unknown how deep Trump was in with Epstein, pardon the pun, Trump’s friendship demonstrates the type personalities which surround Epstein, with money being the common tie.
Source

Admin
Posts : 106821
Join date : 2012-01-04
Location : Woodstock Nation
His wife left him because he could not keep his dick in his pants and is a cheating womanizer. Why do men like this get married in the first place?