Pepe Escobar
The Paris unity march attended by over 40 world leaders has revealed the Western “double standard” approach concerning the freedom of speech and the battle against terrorism. 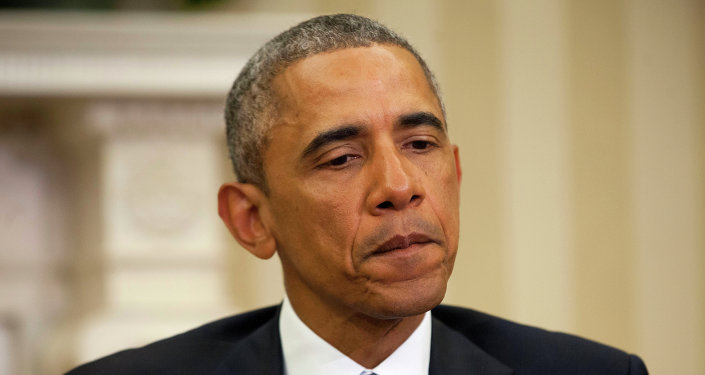 © AP Photo/ Pablo Martinez Monsivais
US Media Bash President Obama for Absence During Unity Rally in Paris
BEIJING, January 12 (Sputnik) — What an unrivalled parade of political hypocrisy. The sight of General Hollande, Conqueror of Mali; David of Arabia Cameron; Angela “Let Eastern Ukrainians die” Merkel; Ahmed “Assad must go” Davutoglu; even King Sarko the First, Liberator of Libya; not to mention Bibi “Final Solution” Netanyahu – all marching for “freedom”, “free speech” and “civilization” against barbarism in the streets of Paris would make every stalwart of Western intellectual tradition, from Diogenes to Voltaire and from Nietzsche to Karl Kraus, cringe in disgust.Seen from Asia, this political hijacking seemed even more grotesque. And no wonder a mixage went viral across Southwest Asia – home of Arab social networks; the “march for unity” in Paris coupled with Hitler and the nazis strutting their stuff with the Eiffel Tower in the background. Here’s the whole “freedom of expression” debate in a nutshell. Would that ever be allowed in the front page of a Western newspaper, satirical or otherwise?
One of the greatest tricks the ruling elites of Western civilization managed to pull off has been the myth of “free speech” – on a par with the myth of a “free” market. “Free”, yes, but to the extent the Masters of the Universe allow it. Any speech that blasts Atlanticist rackets – geopolitical or economic; exposes double or triple standards; and details really serious stuff – from financial crimes to war crimes and, crucially, Western-sponsored terrorism – is ruthlessly silenced.
So to vilify Islam as a whole, as well as 1.6 billion Muslims en masse, is acceptable, or at least tolerated. But to denounce Zionism is “anti-semitism”. “Freedom of the press”? Iran’s Press TV is banned all across Atlanticist domains. RT is routinely derided as the mouthpiece of an “evil” dictatorship. Will these “leaders” parade in Donbas or Damascus defending “freedom of speech”? Forget it.
“Our” NATO-living bastards
Arguably the icing on the lethal cake was the “support” to France offered by the House of Saud, which has just conducted the first round (50 out of 1,000 lashes) of public flogging of jailed blogger Raif Badawi. His crime: running a liberal website in favor of that oh so precious “freedom of speech”, but in Saudi Arabia.
Oh – the enlightened hordes cry in unison — but they are a “conservative kingdom”! They are certainly one of the West’s key strategic allies – as much for all that oil as for being a fabulous market for our weaponizing tools. They are “our” bastards. So yes, they can get away with anything.
The difference is that now the Masters of the Universe cannot so easily fool the overwhelming majority of the Global South, which understands   there is hardly any substantial difference between the House of Saud, the myriad declinations of al-Qaeda, and IS/ISIL/Daesh – the fake Caliphate now in possession of “Syraq”.
The root of all jihadi hell, fundamentally, is medieval Wahhabism – and its primitive, intolerant interpretation of Islam. Yet this phenomenon cannot even begin to be discussed by Western corporate media. No “freedom of speech” there. The House of Saud and assorted Persian Gulf plutocrats are “our” bastards. They are even helping the Empire of Chaos-led coalition to fight Daesh! 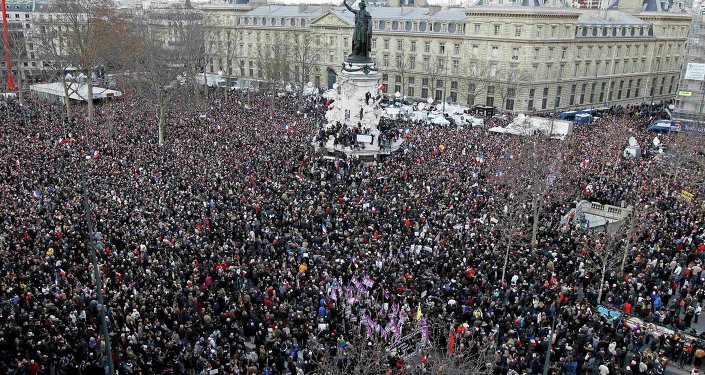 © REUTERS/ Youssef Boudlal
Highlights of Unity March in Paris Honoring French Terror Attacks Victims
Even French intellectuals who used to make some sense of jihadism, like Olivier Roy, are asking themselves about the “link between Islam and violence”. Wrong question; it’s not about Islam but about Saudi-exported religious ideology/proselytism.Internally, French society is not “threatened” by a Muslim presence – although it is indeed threatened by exacerbated Islamophobia. The key problem is that France does not know how to integrate its Muslim population, something that allows what sociologist Farhad Khosrokhavar describes as “terroristes maison”. These made in France terrorists start as petty thieves, are de-Islamicized and then re-Islamicized by neighborhood imams and most of all by the devastation wreaked by the Empire of Chaos and NATO over the lands of Islam.
NATO, which includes France, has been doing everything from bombing civilians (Libya) to financing/weaponizing/”supporting” the so-called “moderate rebels” in Syria. And it doesn’t get much better in the freedom of speech front. According to the BRussells tribunal, at least 404 journalists have been killed since the 2003 US invasion/occupation of Iraq; 374 of them were Iraqis. They were not exactly mourned by the freedom-loving Atlanticist gang. Neither were over 1,000,000 Iraqi civilians decimated by the Empire of Chaos in over three decades of imperial rage. Not to mention the 200,000 Syrians victims of the “Assad must go” war.
Where’s our Patriot Act? 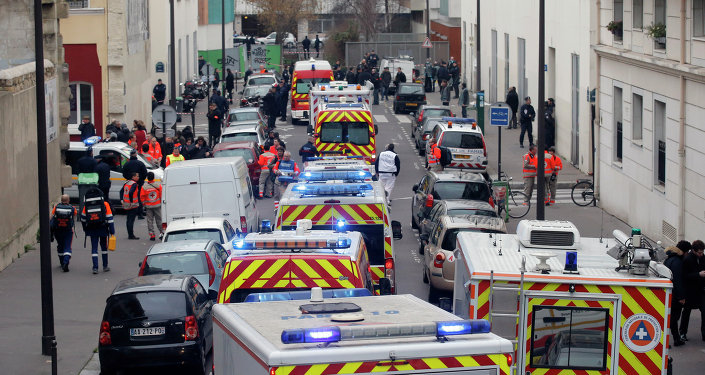 © AP Photo/ Francois Mori
Yemeni Al-Qaeda Leader Praises Charlie Hebdo Attack, Predicts More Bloodshed in France
In the counter-terrorism front, the post-Charlie circus will be a gift that will keep on giving – in full “war on terra” mode. All the alleged perpetrators are conveniently dead – so there are zero chances of piecing together the real story. This may have been Al-Qaeda in the Arab Peninsula (AQAP); this may have been division of labor between AQAP and IS/ISIL/Daesh; this may have been a jihadi commando that acted like pros until, as French Interior Minister Bernard Cazeneuve admitted, they made the “one fatal mistake” – how thoughtful! — of leaving an ID card in their abandoned getaway Citroen.The Ministry of Fear has issued a worldwide warning about the “continuing threat of terrorist actions and violence against US citizens and interests throughout the world.” There will be a “security” summit in the White House on February 18 – even as France’s Interior Minister stresses Europe needs to “exchange information” about people returning from “Syraq”.
It does not occur to any “expert” that the “West” created the playground for “these people” to go hone their jihadi skills in the first place.
King Sarko the First, predictably, is on a roll. His new spin is “war of civilizations” – which is essentially a made in France take on Dubya’s “war on terra”, paving the way for a French Patriot Act. The real game, though, has nothing to do with “democracy”, or “freedom of speech”, not to mention “war of civilizations”. And predictably, the only Western response is to multiply the tentacles of the Orwellian surveillance/security hydra – a dead ender because it refuses to address the real root causes of jihadism.
Up next: a Guantanamo made in France sponsored by Dior. Thank the Lord we have so many bright politicians to protect us.
The views expressed in this article are solely those of the author and do not reflect the official position of Sputnik.
You can buy Pepe Escobar’s latest book “Empire of Chaos” here
Follow him on Facebook
source »