OUT OF MIND » THE INSANITY OF REALITY » GOVERNMENTS & THE NEW WORLD ORDER » Eco-Fascism Bares Its Teeth: Global Warming Alarmist Wants to Barcode Babies 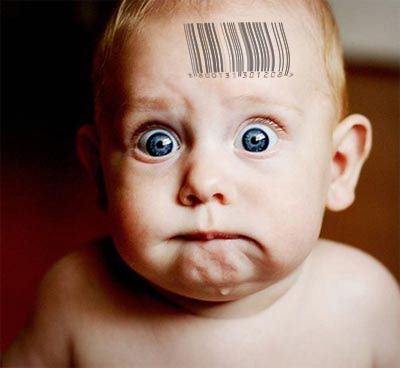 
05-26-2012 • http://www.prisonplanet.com, Paul Joseph Watson
“If I were empress of the Universe I would insist on every individual having a unique ID permanently attached – a barcode if you will; an implanted chip to provide an easy, fast inexpensive way to identify individuals,” Moon told BBC Future.

“It would be imprinted on everyone at birth. Point the scanner at someone and there it is,” she said, adding that the elimination of anonymity would enable people to be identified in both combat and non-combat operations.

Moon’s proposal sounds like something out of Nazi concentration camps, where prisoners were tattooed with five digit Hollerith numbers to identify them using a punch card system developed by IBM.

However, science fiction writer Moon is not merely a global warming alarmist, she is also a Malthusian population control advocate.

In considering the fact that the planet used to be warmer than it is now, Moon argued that this “normal warmness” only sustained a population of around two billion, a situation Moon characterized as not “desirable…or even survivable.” In other words, there are currently around five billion too many people walking around the planet in Moon’s judgment.

OUT OF MIND » THE INSANITY OF REALITY » GOVERNMENTS & THE NEW WORLD ORDER » Eco-Fascism Bares Its Teeth: Global Warming Alarmist Wants to Barcode Babies