May 31. 2012 – DENMARK – Moody’s has downgraded the credit rating of nine Danish banks, citing the impact of the rolling eurozone crisis on bank loan quality and on their fund-raising ability. The nine, along with the Finnish subsidiary of one of the banks, saw their ratings cut one to three notches, with one of them, DLR Kredit, pushed three steps down into the junk-bond realm at Ba1. “Danish financial institutions face sluggish domestic economic growth, weakening real estate prices and higher levels of unemployment, as well as the risk of external shocks from the ongoing euro area debt crisis,”’ Moody’s said. “Asset quality is deteriorating, and these pressures are expected to continue.” The rating agency also said that the “substantial” reliance of most of the institutions on funding from the market increases their vulnerability to the eurozone crisis. “Structural changes to that market have increased refinancing risk, posing a particular concern for mortgage credit institutions whose access to alternative funding is limited.” All but DLR Kredit remained in the low end of investment-grade rating. Moody’s said the average long-term ratings for Danish financial institutions stood at Baa1, “medium grade with moderate credit risk,” three steps above junk grade. But, Moody’s said, they remained in a weaker position compared to their Nordic peers to be able to manage credit risks. The nine were Danske Bank, Jyske Bank, Sydbank, Spar Nord Bank, Ringkjobing Landbobank, Nykredit, Realkredit, DLR Kredit, and Danmarks Skibskredit. Also downgraded was Danske Bank’s Finnish arm Sampo Bank. –Herald Sun 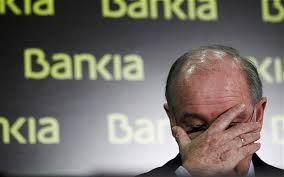 Spain in emergency crisis: “We’re in a situation of total emergency, the worst crisis we have ever lived through” said ex-premier Felipe Gonzalez, the country’s elder statesman. The warning came as the yields on Spanish 10-year bonds spiked to 6.7pc, pushing the “risk premium” over German Bunds to a post-euro high of 540 basis points. The IBEX index of stocks in Madrid fell 2.6pc, the lowest since the dotcom bust in 2003. Chaos over the €23.5bn rescue of crippled lender Bankia has led to the abrupt resignation of central bank governor Miguel Ángel Fernández Ordóñez, who testified to the senate that he had been muzzled to avoid enflaming events as confidence in the country drains away. Markets are on tenterhooks as Spanish yields test levels that forced the European Central Bank to respond last November with its €1 trillion liquidity blitz. “Nobody is short Spanish debt right now because they are expecting ECB intervention,” said Andrew Roberts, credit chief at RBS. “If it doesn’t come — if we take out 6.8pc — we’re going to see a hyberbolic sell-off,” he said. Italy felt the full brunt of contagion from Spain on Wednesday, with 10-year yileds back near 6pc. The euro fell to a 2-year low of $1.239 against the dollar. Crude oil and metal prices plummeted and save-haven flight pushed rates on 2-year German debt to zero. Gilt yields fell to 1.64pc, the lowest in history. Mr Roberts said the collapse in Spanish tax revenues is replicating the pattern in Greece. Fiscal revenues have fallen 4.8pc over the last year, and VAT returns have slumped 14.6pc. Debt service costs have risen by 18pc. The country is caught in a classic deflationary vice: a rising debt burden on a shrinking economic base. “Once you get into such a negative feedback loop, you can move beyond the point of no return quickly,” he said. –Telegraph

Guest
Bring them down!! :bounce:

»  List of 15 Banks Downgraded by Moody's Today
» Earth in crisis: Is the planet on the verge of a ‘meltdown’?
» Be Very Careful, Beloved Spain. . . it seems the crisis is rapidly coming to a head . . . ~J
» Ethan Huff ~ Panic Cash Withdrawals In Spain Drain Banks; Greece-Style Economic Implosion Now
» Spain’s Banking Contagion Spreads: Italian Banks Block Customer Accounts – No Withdraws!!! Warning/Get Your Money Out!!!