USAF UFO Blue Book files forced to be taken down 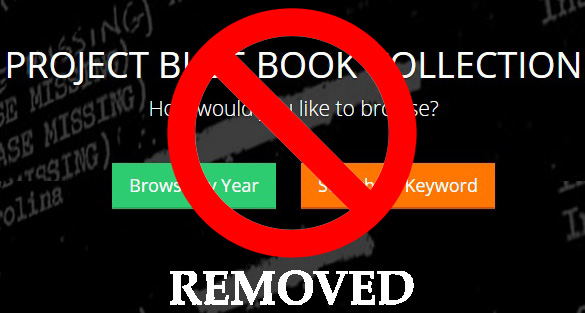 
The news was ablaze with the story of files regarding the U.S. Air Force’s investigation into the UFO phenomenon being posted online at The Black Vault website. Most news outlets neglected to report that these files were not new to the internet, but that what was new was that they were in a PDF format, and much more accessible than they had been previously.
Regardless, interest in the files soared, and many local media outlets combed the files for UFO cases in their neck of the woods. This spawned many stories about UFO sightings the U.S. Air Force took an interest in when they were officially investigating UFOs from the late 40s to the late 60s.
However, now, unfortunately, the files at The Back Vault have been forced to be taken down. Fold3, a site that posts military files and is a subsidiary to Ancestery.com, has claimed they have a digital copyright over the files.
John Greenewald, owner of The Black Vault, has sent out this statement:
The Black Vault’s Statement on the Project Blue Book Files
January 29th, 2015 – It is with great frustration to announce, that Ancestry.com, and their subsidiary Fold3, has laid down a claim to copyright on the Project Blue Book material – which has long been labeled as “public domain” by the National Archives & Records Administration (NARA).   Ancestry.com is claiming ownership to the digital version of this material – despite me having records that Fold3 doesn’t even have in their archive and I received under the FOIA starting back in 1996.  They simply claimed it was 100% theirs and I was forced to remove it.
Because of my attempt with properly crediting Fold3 with a DIRECT LINK to their site as partial credit for some of the material, they used that show of proper credit by me to issue a copyright claim under the Digital Copyright Millennium Act (DCMA). Anyone who knows anything about the law can attest; you are “guilty until proven innocent” so this was the beginning of the end. I never hid from Fold3 as a source, and even brought them up in some media interviews I did take part in, which were all cut out. No one cared about that part of the story – this new archive was what they wanted to report on because it was simple, straight forward, easy and free. And people loved it.
Based on an evidence-less claim I was forced to remove the entire site.  That’s right, there was ZERO evidence submitted to my web hosting provider of ownership or copyright or license, but rather, they simply placed the accusation which is all it takes.
In good faith, I took the site down in hopes a compromise could be reached. They already had credit given on the front page of the site for some of the material, and that link alone resulted in a 12%+ increase in their entire statistics since they posted records in 2007, and my link multiplied their weekly hits by 10x, yes ten times, in only 5 days (statistics are posted on their page, so I am not guessing on those statistics but rather took notes).
I stated there was much more information here than is cited to Fold3, but they didn’t care.  I offered giving them a full 100% “share of voice” banner ad to advertise Fold3 (in addition to the link already driving them traffic), or to sell ads with no profit share to me, and they didn’t care. I asked if they would work with me on any capacity, because CLEARLY interest was being generated by my audience (and obviously not by theirs) but they didn’t care.
In the end – they offered I become a member of their affiliate program – and offer a link to them in exchange for a portion of sales generated. ie: You have to sign up with them, pay a membership, and they give me a percentage.  I quickly declined.
This is public record material, and it should remain so. To lay ‘exclusive’ claim to it in the digital world, when both sites (my site and theirs) offer it for free – is ludicrous and a waste of time and money for everyone.
But at the end of the day, I am proud to have brought attention to information that although has been available for quite some time – the public at large never knew it existed.  I will let [url=http://www.google.com/trends/explore#q=project blue book]Google Trends[/url] prove my point.  Here is the popularity of Project Blue Book, since 2005, and a graph relating to people searching for information on it. 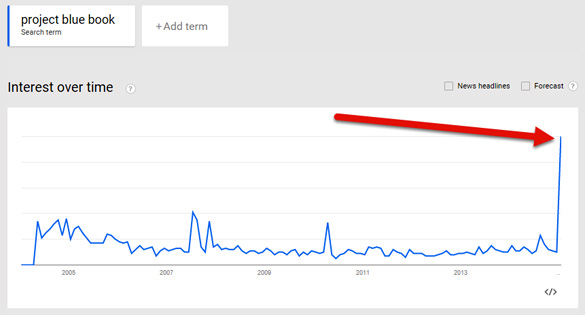 See that spike?  Yes, The Black Vault did that… and I am proud to be the one who caused such an uproar of interest by the public and the media (despite some erroneous facts in the reporting).
Did some media outlets misreport? Yes, and if this page was still up, there was a message on the front page setting the record straight.
But, call it corporate greed, a legal loophole, or a grey area in the copyright law, all of that is gone in the name of getting your personal information, and your credit card, by a corporation that has a wallet much thicker than mine. I’ll let you decide what the right label is to put on this entire mess.
Does all of this upset you? Me too!  And I invite you to express your thoughts to Ancestry.com, Fold3, and anyone else you’d like to express your disappointment:
Fold3
355 South 520 West
Suite 250
Lindon, UT 84042
Ph 1-800-613-0181
support@fold3.com
Ancestry Inc. Corporate Headquarters
360 West 4800 North
Provo, UT 84604
Ph 801-705-7000
Fx 801-705-7001
support@ancestry.com
In 18+ years, I’ve never seen anything like this, and it is a sad day for the world of public domain, public information, public record and the idea of “Freedom of Information”.
I have vowed from day 1, never to fall into the pit of desire of placing a price tag on PUBLIC information. It’s a shame I am very much alone in that belief.
Sincerely,
John Greenewald, Jr.
The Black Vault
http://www.theblackvault.com