OUT OF MIND » TRUTH IN CONSPIRACY THEORIES? » HISTORIES MYSTERIES » Thoth Hermes Trismegistus and his Ancient School of Mysteries

Thoth Hermes Trismegistus and his Ancient School of Mysteries

Thoth Hermes Trismegistus and his Ancient School of Mysteries


14 February, 2015
Thoth Hermes Trismegistus and his Ancient School of Mysteries

Thoth Hermes Trismegistus is portrayed by the Egyptians as the moon god with the body of a man, head of an ibis, and a crescent moon over his head. His symbol was the winged serpent staff. He was the god of wisdom, letters, and time. But he was not only known to the Egyptians. To the Sumerians he was Ningizzida; he may have been Enoch to the Jews, Odin to the Scandinavians, Wotan to the Teutons, and some even suggest Buddha.
Before he was revered as a god, he was the first great Egyptian philosopher and founder of the Ancient Mystery Schools, receiving his wisdom while in meditative trances, writing over 40 books including (allegedly) the Emerald Tablet, The Book of Thoth and The Divine Pymander, with the Book of Thoth only being given to his enlightened initiates of the Mysteries.

Thoth, the ancient Egyptian god of wisdom, depicted with the body of a man, head of an ibis, and a crescent moon over his head. (Vladimiraz / Dreamstime.com)

Nothing is for certain about the Book of Thoth other than the fact that it was written in Egyptian Hieroglyphics.  It was kept in a golden box in the inner sanctuary of the temple and only the highest initiate of the Hermetic Arcanum Mystery School had the key to it. It is said the book described the Key to Immortality, the process achieved through awakening certain areas of the brain, similar to the Buddhist monks’ practices.  Gardner and other authors claimed the awakening of the brain was achieved through meditation, the use of a white powder, and the priestesses’ sacred essence.
The most powerful of the Mystery Schools was known as the Royal School of the Master Craftsmen at Karnak, founded by Pharaoh Thuthmosis III, though as with all the Mystery Schools, it is commonly believed that the true founders resided in Sumeria, emigrating to Egypt, which ties in to Sitchin’s claims that Enki and his sons (including Ningizzida) had Magan (Egypt) as their domain.
This school was also known as the Great White Brotherhood due to the members choice of raiment (white robes) and their dedication to producing the white powder known to the Mesopotamians as Shem-an-na, the High-Ward Fire Stone, or ‘white bread’ to the Egyptians. Pictures of it show it being offered to the Pharaohs, in the shape of a cone. 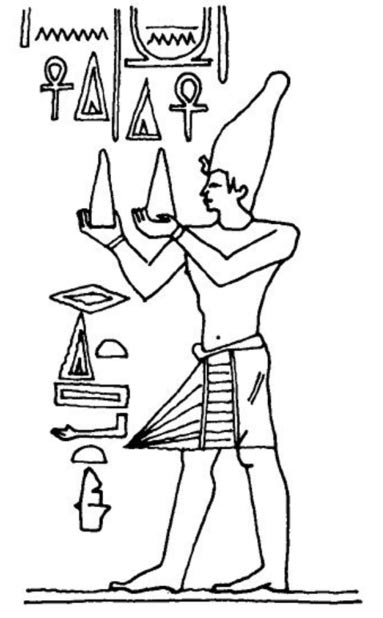 Man holding the Shem-an-na, white powder (subtleenergies.com)
Petrie discovered on the top of Mount Sinai, an Egyptian Temple which contained a bewildering discovery:  laying some inches deep beneath heavy flagstones in a storeroom was a considerable supply of the finest pure white, unadulterated powder. Copper smelting and animal sacrifice were quickly ruled out.
Some of the mysterious powder was taken back to Britain for analysis and examination, but no results were ever published. The rest was left open to the elements after 3000 years to become a victim of the desert winds. What has become apparent, however, is that this powder was seemingly identical to the ancient Mesopotamian fire-stone or shem-an-na - the substance that was made into bread-cakes and used to feed the Babylonian kings and the pharaohs of Egypt. This, of course, explains the temple inscriptions denoting the importance of bread and light, while the white powder (the shem-an-na) has been identified with the sacred manna that Aaron placed in the Ark of the Covenant. Petrie discovered a large quantity of pure white powder in a temple on top of Mount Sinai. ‘Ascent of the lower ranges of Mount Sinai’. Coloured lithograph by Louis Haghe after David Roberts, 1849. (Wikimedia Commons)
Eventually the Mystery Schools went into decline as new Dynasties emerged. The initiates left Egypt and brought the Book of Thoth to another land. Where it is now, no one knows, though supposedly the chain of succession of Grand Master since Thoth, has remained unbroken. The Rosicrucians are said to be descended from his school while the Freemasons are descended from the school founded by Solomon.
As for Thoth? He has remained revered by philosophers, occultists, alchemists and healers through the ages, though many of the texts accredited to him were lost in the Great Fire of the Library of Alexandria. Who know how different history might have been had the knowledge contained in that library not been lost? Hermes Trismegistus (Thoth). Floor inlay in the Cathedral of Siena Russian, 1480s (Wikimedia Commons)
Featured image: A figure of Thoth carved on the back of the throne of the seated statue of Rameses II. (Wikimedia Commons)
References:
Ancient Mystic Order of Noble Knowledge – AncientMonks.com. Available from: http://www.ancientmonks.com/
Genesis of The Grail Kings – Laurence Gardner. Available from: http://www.graal.co.uk/genesis_lecture_full_5.php
The Great White Brotherhood – Wes Penre. Available from: http://www.illuminati-news.com/great-white-brotherhood.htm
By Katrina Sisowath, Author of the Dragon Court series.
- See more at: http://www.ancient-origins.net/history-famous-people/thoth-hermes-trismegistus-and-his-ancient-school-mysteries-002676#sthash.SxmQ5bEq.dpuf

OUT OF MIND » TRUTH IN CONSPIRACY THEORIES? » HISTORIES MYSTERIES » Thoth Hermes Trismegistus and his Ancient School of Mysteries