UFO Crash Lands in Lake Winnipeg, Canada Feb. 19 ; Covered Up by Military on the Scene 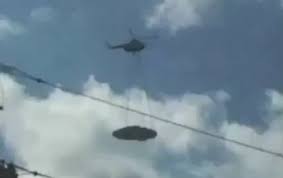 Oh, what fun the powers-that-were are having trying to keep their little secrets from us. But The People are determined and realize they have the right to know what’s going on.
Man, Lake Winnipeg is the last place you want to crash land in the winter. Brrrrrr!!!
The military swooped in on the double, of course, on February 19th to mitigate the rumours and speculation as well as prevent photos, videos, etc. from being released…
…but we don’t know if it’s because it’s an extraterrestrial craft and they still mistakenly believe they can prevent us knowing about the ET presence, or because it’s a military craft they can’t risk us finding out about because they are so far advanced beyond what they admit to the public—probably at least 50 years if not more.
AND… is it Canadian, US, Russian… whose?  Oh, why the ruckus? It’s too cold for swamp gas so no doubt it’s just ye olde weather balloon, LOL.
It’s a matter of ‘national security’ don’t you know, and could very well have been a training exercize. The Cannucks could be conducting their own test flights in their latest flying saucer.
Since the Germans had their flugelrads in the 1930’s, maybe you can imagine the technology the military is playing with now.
If it was a manned craft, I hope the pilots and engineers are okay. We don’t yet know if it was a UFO or a USO. (unidentified submersible object)
Either way, it’s a race to see how long evidence can survive on the WWW before the feds take it down.

Anyone having the wherewithal to download images might want to do that before YouTube, Facebook, etc. lock it down so it can be shared long enough that those who want to see it, can do that. There’s plenty of talk about this if you do a search.

This will be an interesting story to follow in the coming days and weeks. I think SOMEONE will be forthcoming with the truth.  ~ BP 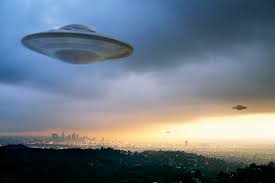 …just an unrelated illustration
Major! UFO Crash Lands in Canada and Is Being Covered Up by Government! Is it Alien or Is it Military? You Decide…
February 21, 2015 from Before It’s News

In Manitoba, Canada on the Jackhead Reservation reports have been surfacing of a UFO crash landing into Lake Winnipeg. Recently a call came into Third Phase of the Moon reporting this. The man went by the name of Mark. Here is part of the dialogue:
“Apparently a disc shaped craft was seen crashing through the ice on the lake, at least one person got photographic evidence but has since been detained by the Canadian military. UFO crash in rural Manitoba Canada: A UFO crash landed into a frozen lake within the last 24 hours on a Indian reservation [in Canada it’s a “reserve”] in rural Manitoba. I have contact with a former resident of the reservation and their family still lives on the reservation and informed them about the situation this evening.
I have also been informed that nobody is allowed to leave or enter the reservation at this time and that the military has been going door to door talking with residents. They are telling the residents that they are conducting emergency training exercises, but there has been an extreme cold front in Manitoba over the last 2 days and it is extremely dangerous to spend time outdoors for any period.
The military has moved in all their equipment effectively blocking any view of what may have crashed into the water or what they are doing there, but I’m sure they are recovering the evidence.
I will get back in touch with in a few hours, I was told the name of the reservation but it was very long and hard to pronounce, I will get the exact spelling of the reservation in a few hours when I meet with my contact and I will forward any new information over.” Mark
Here is the full video dialogue between Third Phase and Mark (the aircraft in the video is not the aircraft they are talking about, it’s just a representation during conversation)
https://youtu.be/I92ZC2cGc8s
[url=http://starshipearththebigpicture.com/2015/02/21/ufo-crash-lands-in-lake-winnipeg-canada-feb-19-covered-up-by-military-on-the-scene/Major%21 UFO Crash Lands in Canada and Is Being Covered Up by Government%21 Is it Alien or Is it Military? You Decide%E2%80%A6]https://youtu.be/1MjLAPPFOVM[/url]
But that’s not all! Reports were also coming in on Facebook, a man by the name of Brent Mancheese linked CNN stating:
“UFO crash reported on the Jackhead reserve in Manitoba, Canada apparently the Canadian Military have vehicles lined up on north Shore. ..they are threatening anybody who tries to take pics….lots of eye witnesses…There is round object being hauled across the lake being pulled by snow mobiles and Bombardier.” 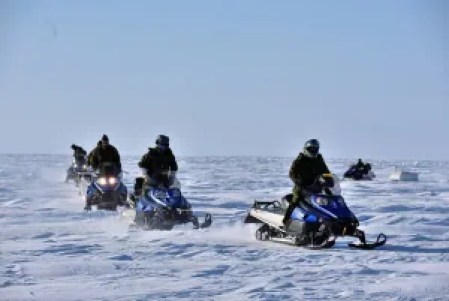 Despite the outcry from citizens in the area about the crashed UFO and reports of military forces using snowmobiles to drag away a large disc, the Canadian Forces are claiming this is all just one big military training exercise training search and rescue how to deal with a plan crash in the Arctic.
According to Lt.-Col. Paul Davies, commanding officer of 38 Territorial Battalion Group in Canada, who was reportedly involved in the Arctic Response Company Group training exercise on Lake Winnipeg, stated this to CBC News:
“There’s no aliens, just my friends in the air force who are out there helping us on this exercise…I have the commander of that air force contingent sitting right beside me and, you know, he assures us that that was not a UFO, but that was him.”
The trouble with this statement is the Canadian Forces are refusing to show the supposed “Military craft” to the public. If this is a training exercise why not display the craft to stop the talk about it being a UFO?
In the event Third Phase Of The Moon releases this photo I will display it here for you to see.
That said, I guess the ultimate decision is up to you. Do you believe this is another UFO coverup like what happened in Roswell, New Mexico? Or is it a military training exercise as Canadian Authorities claim?
Source