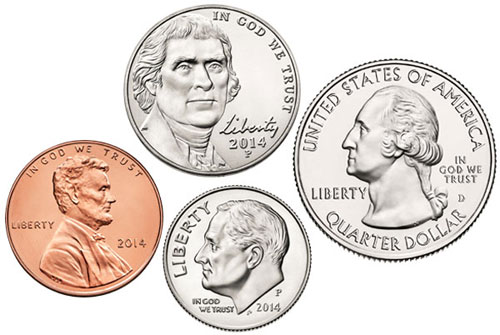 The bill calls for the four denominations to be produced primarily of steel and meet such other specifications as the Secretary of the Treasury may determine appropriate. The coins are to be treated in such a manner that they are similar in appearance to the coins produced prior to the date of enactment. Lastly, there is a requirement to use only steel produced in the United States unless the Secretary finds this requirement to be inconsistent with the public interest or an adequate supply of United States steel is not available.
There are additional requirements for the conversion to new coin specifications. These include the stipulations that such specifications would not require more than one change to coin-accepting and coin-handling equipment, facilitate or allow the use of coins or tokens of lesser value in place of circulating coins, or require non-trivial changes to coin-accepting or coin-handling equipment to accommodate co-circultion of coins carrying the new and old specifications.
Finally, there is an allowance for the Secretary of the Treasury to produce numismatic versions of the cent, nickel, dime, and quarter in compositions in place before the act.
The issue of circulating coin composition had gained significant attention when declining production volumes and increasing base metal costs drove the United States Mint costs to produce the cent and nickel to more than double their respective face values. For the 2011 fiscal year, the cost to produce and distribute the two lowest denominations rose to a peak of 2.41 cents per cent and 11.18 cents per nickel.
Since this time, rising production volumes and lower base metal prices have served to reduce the costs of producing these denominations, although both still remain well above their respective face values. For the 2013 fiscal year, the cost to produce and distribute the cent was 1.66 cents and the cost for the nickel was 8.09 cents.
Despite the losses generated by the two lowest denominations, across all circulating denominations, the Untied States Mint has consistently generated positive seigniorage. For the 2013 fiscal year, seigniorage generated from circulating coinage was $289.1 million.
Amidst the legislative attempts to immediately alter the composition of circulating coins, the United States Mint has been conducting research and development activities with regards to circulating coin composition under the Coin Modernization, Oversight, and Continuity Act of 2010. The most recent biennial reported delivered in December 2014 outlined the potentially significant private sector costs of a dramatic change in coin composition and indicated planned additional research into seamless materials which would have the same electromagnetic signature as current coinage.
The current bill H.R. 516 has two cosponsors and has been referred to the House Financial Services committee.

Why not change them back to silver, gold and copper which have greater value than a promise.