The Mysteries of Water and Feng Shui

Much has been written about water in the scope of Feng Shui influences and yet the specific applications for water still elude the general public. This is because we have many theories in the Xuan Kong Flying Star School which need to be learned through actual training. Otherwise, someone might assume that a water feature, like a fountain or pond, is always a good asset to a property, which is actually not the case. In fact, someone could innocently place a water feature in an area that could attract crime or reduce the occupant’s financial potential.

Every twenty Year Era as defined by the Xuan Kong School, has both ideal as well as worst placement for water for both the interiors and exteriors. The current 20 Year Era known as Period 8 started in 2004. The previous Era, Period 7, started in 1984 and the one before that started in 1964. We have 9 Eras, each lasting 20 years and then they repeat perpetually. This is why if you read a book or article that says something generic like “water in the north is good,” this is clearly erroneous. It might be true some of the time for some of the people, but not all of the people all of the time. This very article was inspired by a client asking for advice on where to place a pool that will be a safe and good area for the next thirty plus years. 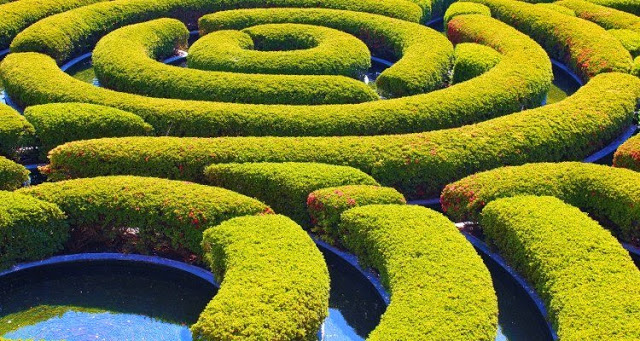 In the classical schools we also have water placement formulas just based on the orientation of a house, such as the “Castle Gate” formulas, although I would personally never ignore factors which have to do with the age of the house. Sometimes that cancels out another place to put water on a property. Some practitioners, who have had next to no classical training, believe that placing water in the north sector of a house is appropriate. This could be because the direction of north is inherently associated with water. But this is less than half the story. In the “Pre-Heaven Sequence” of the trigrams, the Luo Shu, the direction of North is associated with the Kun trigram, which is an “earth” trigram as opposed to the Kan trigram which is related to water.

This simplified way of looking at the symbolism of the trigrams has not even considered the annual influences involved. For example, in the year 2011 the annual influence in the north was the visiting 3 star, related to gossip and legal problems. Adding water to the north in 2011 could have exacerbated this situation. That same annual 3 moved over to the southwest in 2012.

As a long time consultant, I would like the public to know that Feng Shui has many wonderful things to offer people, but in the same way that a lay-person could cause themselves harm by self-medicating, self-diagnosing, or relying on generalities, they could be seriously taken down the wrong path.

Another piece of information that is relevant could be the birth date of the occupant. Each person has a direction that is for them, personally, a bad location for water to come towards their house. The “Yang Ren” direction can cause harm to an occupant. For example, a person born in a year that ends in a 7 (1947, 1957, 1967, 1977) should not have water outside their house in the Sheep-Wei direction.

This is another related topic in terms of the direction in which water flows. Water can flow towards or away from a property. Infinity pools give the impression that water is leaving or moving away from a house. So even though they look cool, they may not provide the most supportive Feng Shui. Many ordinary fountain pumps will simply push water up from a lower level and then the water will cascade down several tiers. This movement of water going up and then down is usually harmless.

As you may have heard or read, the very word “shui” translates as water. It is one of the five elements used routinely in a Feng Shui assessment to help balance the energies of that local area. For instance, we could place water in a room to help reduce leg or back pain. We might use water in another context to help with business success. There are also applications of water use to help with relationships. So, water can be used, strategically for a variety of life issues, not just one area of concern.

Water needs to be clean and ideally circulating. Yin water is calm, still water and it could be too yin, causing health problems if it is stagnant or dirty. Yang water is very active water, and in balance with the environment can be fine as long as the water is not too yang. Out of control water could include hurricanes, tsunamis, and other water disasters. But even having a fountain that makes a harsh, unpleasing sound should be adjusted so that it does not have a chance to produce a negative response.