Today at 1:57 pm by PurpleSkyz

Today at 1:18 pm by Consciousness Of Economic

» How do the Musical Pillars Work? Rock Melting Technology? Cymatics?

Yesterday at 10:15 pm by RamblerNash

The Danger of Cats for Rh negatives

The Danger of Cats for Rh negatives

at 01:00 Posted by Vatic Master
Vatic Note: This is just another toxin that RH negs need to stay away from and since I am not a doctor, nor do I have any special medicinal training,  I am leaving this up to you.   I felt it sufficient to issue this as a warning because there are a lot of loose cats out there, so beware.  Read this below and you decide.

The Danger of Cats for Rh negatives
http://rhnegativebloodsecrets.blogspot.co.uk/2015/01/the-danger-of-cats-for-rh-negatives.html
By Admin,  The RH Negative Blood Secrets 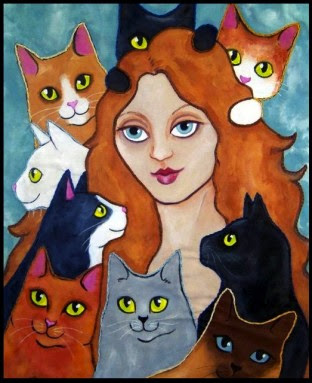 Rh negatives are more deeply affected by the disease Toxoplasma gondii, an older post on this blog show how some scientists were even trying to make out that Rh negative blood is the result of the disease. That is absolute rubbish of course. There are many diseases, like AIDs, Black Death, Ebola, Small Pox and many more that only affect Rh positives and not us, but of course they will use anything against us, to make out our rare blood is some how a mutation, rather than just a purer and more ancient version of their own blood.

Because we are more affected by Toxoplasma gondii it is important that we take measures to not get or spread the disease.

Infection in humans and other warm-blooded animals can occur:

Having a cat as a pet, allowing a cat to defecate in public without cleaning it up are all ways of spreading this disease, and it can even get into our food and water this way.

When a member of the cat family is infected with T. gondii (e.g. by consuming an infected mouse laden with the parasite's tissue cysts), the parasite survives passage through the stomach, eventually infecting epithelial cells of the cat's small intestine. Inside these intestinal cells, the parasites undergo sexual development and reproduction, producing millions of thick-walled, zygote-containing cysts known as oocysts.

Infected epithelial cells eventually rupture and release oocysts into the intestinal lumen, whereupon they are shed in the cat's feces. Oocysts can then spread to soil, water, food, or anything potentially contaminated with the feces. Highly resilient, oocysts can survive and remain infective for many months in cold and dry climates.

Ingestion of oocysts by humans or other warm-blooded animals is one of the common routes of infection. Humans can be exposed to oocysts by, for example, consuming unwashed vegetables or contaminated water, or by handling the feces (litter) of an infected cat. Although cats can also be infected by ingesting oocysts, they are much less sensitive to oocyst infection than are intermediate hosts.

Toxoplasma gondii - also causes schizophrenia in those affected the most, i.e. Rh negatives.

It is well known that this disease effects the minds of mice that it infects, making them attracted to cats, so that they will be eaten and the virus spread. It also works in humans like this.

It was originated as instances of the aforementioned afflictions were noted amongst the populace. Cat lady is a cultural stereotype of a woman who compulsively hoards cats and dotes upon them. Jaroslav Flegr (biologist) is a proponent of the theory that toxoplasmosis affects human behavior.

Louis Wain (artist) was famous for painting cats; he later developed schizophrenia, which was due to toxoplasmosis resulting from his prolonged exposure to cats.

Merritt Butrick (actor) died from toxoplasmosis as a result of his already-weakened immune system.

Prince François, Count of Clermont his disability caused him to be overlooked in the line of succession.

Martina Navratilova suffered from toxoplasmosis during the 1982 US Open.