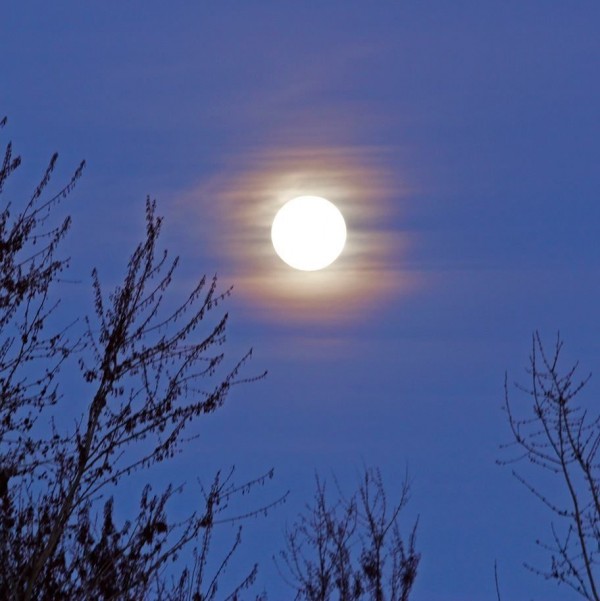 
EarthSky Facebook friend Curtis Beaird in south Georgia captured the shot above.
Tonight’s full moon is the smallest full moon of the year. We’ve heard it called the micro-moon or mini-moon. This March 5, 2015 full moon lies about 50,000 kilometers (30,000 miles) farther away from Earth than will the year’s closest full moon – the full supermoon and Northern Hemisphere’s Harvest Moon – on September 28. The March 5 moon is the year’s farthest full moon because full moon and lunar apogee – the moon’s farthest point in its monthly orbit – both fall on the same date.
Every year has a closest full moon, of course. The mini-moon returns about one month and 18 days later with each passing year, meaning that, in 2016, the year’s smallest full moon will come on April 22. In 2017, it’ll come June 9. In 2018, the year’s smallest full moon will come on July 27. And so on, no doubt until our earthly calendars are long forgotten.
By the way, as an aside, mark your calendar for that September 28, 2015 full moon – the Harvest moon – and closest full moon of this year. It’ll also stage a total eclipse of the moon, which some will call a Blood Moon eclipse. It concludes a series of four straight total lunar eclipses that started on April 15, 2014.
The crest of the moon’s full phase comes on March 5, 2015 at precisely 18:05 Universal Time.
Although the full moon occurs at the same instant all around the world, our clocks read differently in different time zones. In the United States, the moon turns exactly full on Thursday, March 5, at 1:05 p.m. EST, 12:05 p.m. CST, 11:05 a.m. MST or 10:05 a.m. PST. So the Americas won’t see the moon at the instant it turns full because it happens during the daytime hours, when the moon is below the horizon and under our feet.
Enjoying EarthSky so far? Sign up for our free daily newsletter today! 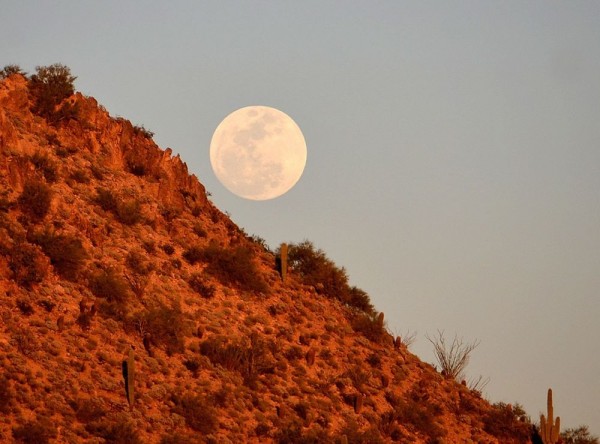 The moon looks full for several days around full moon. William Vann submitted this shot. It’s the rising almost-full moon on March 4, 2015.
No matter where you live worldwide, look for the full moon tonight, lighting up the nighttime from Thursday nightfall until dawn Friday. As with any moon at the vicinity of full moon, tonight’s moon rises in the east at early evening, climbs highest in the sky around midnight and sets in the west in the vicinity of sunrise.
In North America, we often call the March full moon by the names of Sap Moon, Crow Moon, Worm Moon or Lenten Moon. But in recent years, we’ve also heard the term mini-moon to describe the year’s smallest full moon. It’s not a name (like Sap Moon). It’s not bound to a particular month or season. It’s just a term to describe the year’s smallest moon.
What is a mini-moon or micro-moon? Like most astronomers, we at EarthSky have always referred to the year’s smallest full moon as an apogee full moon. The terms mini-moon and micro-moon stem from popular culture. They roll off the tongue more easily than apogee full moon. As some indication of the appellation’s growing popularity, we’ve found that the NASA Astronomy Photo of the Day and timeanddate.org sites both like to call the smallest full moon a micro-moon. 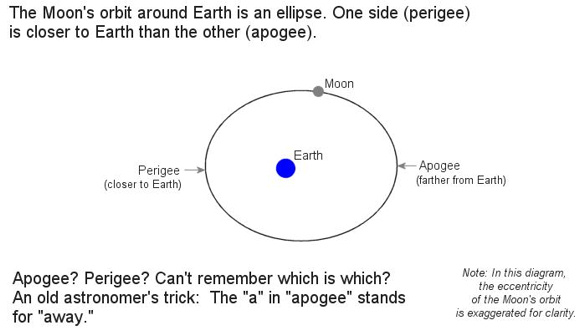 Supermoon versus micro-moon in the year 2007. The photo contrasts the micro-moon (apogee full moon) of April 2007 on the right to the supermoon (perigee full moon) of October 2007 on the left. View larger
Every month, the moon swings out to lunar apogee – the farthest point in its orbit – and then some two weeks later swings to lunar perigee – the closest point to Earth in the moon’s orbit. Whenever the full moon coincides with apogee, we have an apogee full moon – or Micro Moon. However, the February 18 and March 20 new moons bracketing the micro-moon enjoy the supermoon designation, because both of these new moons closely align with lunar perigee – the moon’s closest point to Earth in its orbit.
Fourmilab’s lunar perigee and apogee calculator
In many respects, the micro-moon is the antithesis of a supermoon. The micro-moon, or the full moon aligning with apogee, is the polar opposite of a full moon supermoon, the full moon coinciding with perigee.
Every month for the next seven months, the full moon will come closer and closer to Earth. So the seventh full moon after the March 2015 micro-moon will give us the year’s most “super” supermoon on September 28, 2015. At that time, the year’s biggest moon will be only 356,877 kilometers (221,753 miles) away, about 50,000 kilometers (30,000 miles) closer than tonight’s micro-moon.
By the way, the moon’s mean distance from Earth is about 384,400 kilometers (238,855 miles). As the full moon comes closer and closer to Earth with each passing month, June will give us a full moon near the moon’s mean distance on June 2, 2015. Then we’ll have the year’s closest full moon on September 28, 2015. But for now, enjoy the micro-moon – the year’s smallest full moon. 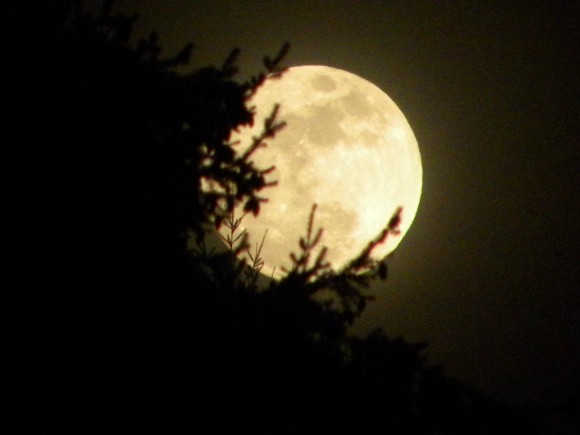 Billie C. Barb submitted this photo of the rising moon on March 4, 2015 from the state of Washington, saying it was “. . . a love affair between the moon and the evergreens.”
Bottom line: The micro-moon or mini-moon – smallest full moon of 2015 – comes on March 5, 2015 It lies about 50,000 kilometers (30,000 miles) farther away from Earth than will the full moon supermoon of September 28, 2015.
EarthSky astronomy kits are perfect for beginners. Order today from the EarthSky store
Donate: Your support means the world to us
Bruce McClure