International Space Station Commander Opens Up About His UFO Sighting In Space Thu Mar 12, 2015 2:23 am 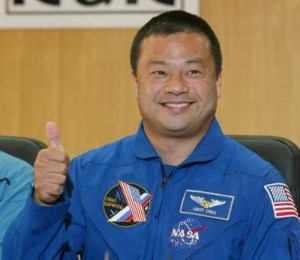 By: Collective Evolution. Leroy Chiao, commander of the International Space Station in 2005 recently opened up about his UFO sighting from space. They were 230 miles above the Earth, and traveling at a speed of 17,000 miles per hour when Chiao spotted a UFO (Unidentified Flying Object). Chiao told the Huffington post:
“I saw some lights that seemed to be in a line and it was almost like an upside-down check mark, and I saw them fly by and thought it was awfully strange. It wasn’t just one, but a line of them strung out along the South American coast” (1)
“I’m skeptical of claims that we’ve been visited by aliens from another planet or other dimensions, but I don’t rule it out 100 percent. I have an open mind and I do believe there’s other life in the universe.” (1)
A growing amount of evidence has emerged, especially within the past few years that has more people asking questions. For example, dozens of governments around the world have recently released previously classified UFO documents. Documents detail how governments have special departments to monitor the UFO phenomenon and obtain information. One example are the UFO files released by the United Kingdom in June 2013, you can view those here.
Documents also reveal that UFOs are constantly tracked on ground radar, air radar, accompanied by visual conformation by military pilots who are scrambled to take a closer look.
Agencies like the NSA have done the same, you can view examples here , here and here. It’s safe to assume that more sensitive documents remain classified, especially with the recent disclosure of the black budget and special access programs by Edward Snowden. You can read more about that here.
Apart from official documentation proving the reality of UFOs (performing maneuvers that defy our known laws of physics like starting and stopping on a dime), we’ve had incredible statements made by hundreds of very high ranking political and military personnel. Paul Heyller, Canada’s former Minister of National Defence recently said that there are “at least four known alien species that have been visiting Earth for thousands of years.” You can read more about that, and watch him make that statement here.
This is a very minuscule amount of evidence that I’ve presented regarding the UFO issue. The UFO phenomenon cannot really be denied anymore, for anybody who has looked into this subject,the evidence can be quite overwhelming. Coupled with this evidence are the experiences people have all over the world involving UFOs, as well as purported extraterrestrial beings. It’s definitely an interesting subject and one that is gaining some well deserved attention as we move through 2014 and beyond. This is thanks to the efforts of researchers, whistle-blowers and more.
Chiao joins a long list of astronauts that have openly spoken out about UFOs and their own individual experiences with them. Other astronauts of the past have made remarkable claims and comments about UFO’s and intelligent extraterrestrial life. Below are a few of many examples. To view some of the best, officially documented UFO footage from the NASA STS-48 Discovery Space Shuttle, click here.