Another conference over. Charlie Skelton talks to some of the 800 activists outside the gates to find out what they learned 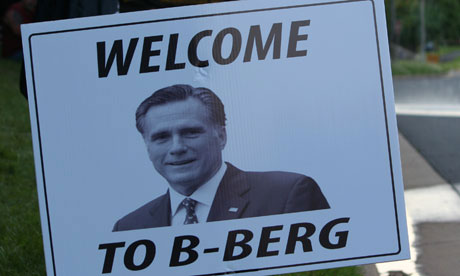 
What a Bilderberg it's been. Big names, big money, big decisions, big crowds. Somewhere around 800 activists outside the gates (up from about a dozen in 2009), and inside? Well, here's what we learned.

Four eyewitnesses on the hotel staff told me Willard Mitt Romney was here at Bilderberg 2012. My four eyewitnesses place him inside. That's one more than Woodward and Bernstein used. Romney's office initially refused to confirm or deny his attendance as Bilderberg is "not public". His people later said it wasn't him.

So, was he being crowned, or singing for his supper? Will Mitt Romney follow in the august footsteps of Clinton, Cameron and Blair to have attended Bilderberg and then shortly become leader? Four years ago, Senator Obama shook off his press detail and nipped (many think) into Bilderberg. This exact same hotel.

Did Romney have to get down on one knee in front of David Rockefeller? This sounds flippant, but it's a serious question: has Bilderberg switched allegiance? Are they going to toss away Obama after just one term?

I put this question to author and Bilderberg expert Webster Tarpley. Is Wall Street going to throw its chips in with Romney? "I think there's a frisson that's gone through the ruling class against Obama," he says. The leak we had from the flirty hotel staffer corroborated this. "They don't seem to like Obama very much," he said.

Tarpley's conclusion is this: "They want Romney and Mitch Daniels, who will run together as moderate rightists." Governor Daniels of Indiana was on the official list. 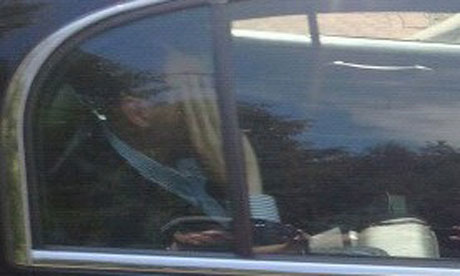 Bill Gates's ear (probably) leaves Bilderberg. Photograph: Mike Paczesny
The Washington Post saw Bill Gates come in. And I've got three eyewitnesses from inside who confirmed he was here. This is his ear:

You won't see the names Mitt Romney or Bill Gates on the officially released Final List of Participants because, well, the list is a nonsense. It's nothing like a complete list of people who attend Bilderberg. It's a smokescreen, a bit of spin. So can we all, please, stop repeating it as gospel?

The Syrian war is on 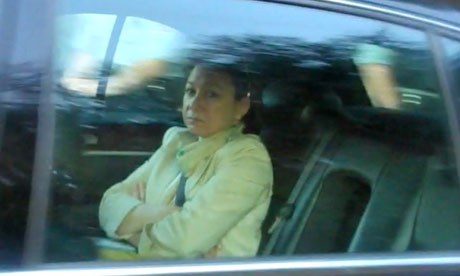 So who is Bassma Kodmani? The answer to that question is also the answer to the question: what the hell is happening in Syria? This is where it gets interesting (and worrying) for Bilderberg followers.

There's a lot of CFR/Bilderberg crossover. Honorary chairman of both is David Rockefeller; co-chairman of the CFR is Robert Rubin (he was here); and on the CFR's board of directors are Fouad Ajami and Henry Kravis, both at Bilderberg 2012.

Bassma Kodmani is also the executive director of the Arab Reform Initiative. This body, set up in 2004 by the CFR, is helping to steer "a comprehensive process" of "democratic reform" in the region. In 2005, the Syrian National Council came into being. Bassma Kodmani was a founding member, and is on the executive committee. Kodmani is one of the SNC's two spokespeople, alongside Radwan Ziadeh (who has a flawless Washington pedigree – look him up). According to its website, the SNC is a non profit public policy research organization register in the District of Colombia and headquartered in Washington DC. Just up the road.

I asked Tarpley about Kodmani. He doesn't mince words. "She's a Nato agent, a destabilizer, a colour revolution queen. The fact that Kodmani was there is a scary one for Syria", says Tarpley.

To those gathered outside, at least, it looks increasingly like, at this year's Bilderberg, the war of regime change got signed off. In the airport lobby, on the way home from Bilderberg, I looked up at a TV monitor to see Bilderberg attendee and CFR board member Fouad Ajami talking about how Syria is about to become another Libya. That sound you can hear? It's all those juicy defence contracts being scratched out around Chantilly. Fuel the jets and open the champagne, boys. We're going in. 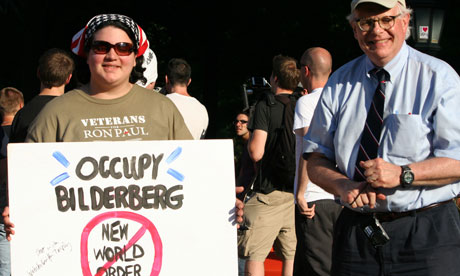 Webster Tarpley meets Occupy Bilderberg. Photograph: Hannah Borno for the Guardian
A statement of support from Occupy London was read out at Occupy Bilderberg. A symbol of Anglo-American unity, like Bilderberg itself. The statement protested against (amongst other things): the rise of an undemocratic "technocracy" – a "network of cronies" in which financial "experts", largely from the international banking community, who have been appointed rather than elected, are handed the reins of government.

So here you've got the (broadly speaking) liberal left protest movement, with its anti-corruption and pro-transparency agenda, finding common ground with US libertarians and an anti-Obama, anti-fascist, pro-union New Deal American like Webster Tarpley.

As Tarpley says: "Bilderberg creates a singularity, where a lot of seemingly disparate things come together." That applies not just to the people inside – megabank money and government – outside the security cordon you've got Occupy Bilderberg rubbing shoulders with US veterans, German students who've flown over for the event, truckers from Michigan, Orthodox Jews, Ron Paul supporters, anarcho-syndicalists, academics and grandmothers.
Why? In the words of the statement from Occupy London: "the profound denial of a participatory, direct democracy which the Bilderberg Conference represents."

Finally. The Washington Times sent Ben Wolfgang, the Guardian sent Ryan Devereaux and the Times of London actually tried to get a journalist inside – Alexandra Frean was turned away at the gates. But she tried. At least she tried. That's a start. We can work with that.

Presumably Eric Schmidt (Google) and Reid Hoffman (LinkedIn) would have been sharing podium-space with Bill Gates at that session. That's if there was one, of course.

Collin versus the new world order 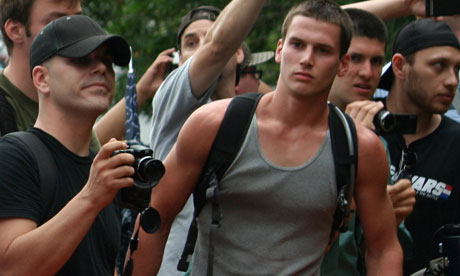 Cult favourite Collin Abramowicz on the Bilderberg 2012 protest line. Photograph: Hannah Borno for the Guardian
I'm not sure global governance stands a chance against Collin Abramowicz. Here – by popular request – is a last blast from the frontline of the resistance:

Hopefully Collin and I will see you all again in 2013. You can email me at bilderberg2013@yahoo.co.uk – if we had 800 this year, I think we could be having ourselves a party. The Bilderburgers are on me.