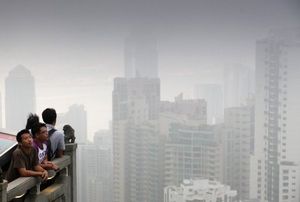 © AFP
China said Tuesday foreign embassies were acting illegally in issuing their own air quality readings and that only the government could release data on the nation's heavy pollution.

China's cities are among the world's most polluted, but until recently, official air quality measurements regularly rated their air quality as good - even as data from the US embassy in Beijingshowed off-the-chart pollution.

The US embassy air quality Twitter feed gained a major following in Beijing, and later in Shanghai when it was introduced at the US consulate there.

Beijing announced earlier this year it would change the way it measured air quality to include the smaller particles experts say make up much of the pollution in Chinese cities, after a vocal campaign.

"The monitoring and publishing of China's air quality are related to the public interests and as such are powers reserved for the government," Wu Xiaoqing, vice minister of environment protection, said at a news conference.

Wu did not name the US, but called on embassies to abide by China's laws, saying that publishing their own air quality data was "not in accordance with the Vienna Convention on Diplomatic Relations".

According to the latest Environmental Performance Index compiled by Yale University, China ranked 128th out of 132 countries for air quality.

Most Chinese cities base their air-quality information on particles of 10 micrometres or larger, known as PM10, and do not take into account the smaller particulates that experts say are most harmful to human health.

The government recently ordered 74 cities including Beijing and Shanghai to begin monitoring small particulates - known as PM2.5 - and publish results this year.

Wu said in March that the new requirements would be implemented nationwide by 2016 as China seeks to control the sources of particulates, such as coal burning and auto emissions.

» If Pollution From China Affects the West Coast, How Come Pollution From Fukushima Doesn't?
» The EMA data leak and what it tells us about mRNA instability
» Son Tells Mom to “Stop the Car!” – She Was Shocked …Then What She Saw Made Her Cry
» Eric Clapton Tells RFK, Jr.: ‘This Has Gotta Stop’
» USA to close Embassies around the World on Sunday