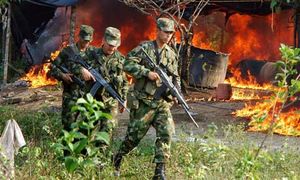 Soldiers torch a cocaine processing laboratory near the city of Cucuta, in northern Colombia, as part of the country's war on drugs. It's just for show of course. The Colombian government manages the cocaine plantations on behalf of its owners up north.

Ed Vulliamy
The Guardian
Sat, 02 Jun 2012 16:03 CDT
While cocaine production ravages countries in Central America, consumers in the US and Europe are helping developed economies grow rich from the profits, a study claims

© AFP/Getty Images
Soldiers torch a cocaine processing laboratory near the city of Cucuta, in northern Colombia, as part of the country's war on drugs. It's just for show of course. The Colombian government manages the cocaine plantations on behalf of its owners up north.
The vast profits made from drug production and trafficking are overwhelmingly reaped in rich "consuming" countries - principally across Europe and in the US - rather than war-torn "producing" nations such as Colombia and Mexico, new research has revealed. And its authors claim that financial regulators in the west are reluctant to go after western banks in pursuit of the massive amount of drug money being laundered through their systems.

The most far-reaching and detailed analysis to date of the drug economy in any country - in this case, Colombia - shows that 2.6% of the total street value of cocaine produced remains within the country, while a staggering 97.4% of profits are reaped by criminal syndicates, and laundered by banks, in first-world consuming countries.

"The story of who makes the money from Colombian cocaine is a metaphor for the disproportionate burden placed in every way on 'producing' nations like Colombia as a result of the prohibition of drugs," said one of the authors of the study, Alejandro Gaviria, launching its English edition last week.

"Colombian society has suffered to almost no economic advantage from the drugs trade, while huge profits are made by criminal distribution networks in consuming countries, and recycled by banks which operate with nothing like the restrictions that Colombia's own banking system is subject to."

His co-author, Daniel Mejía, added: "The whole system operated by authorities in the consuming nations is based around going after the small guy, the weakest link in the chain, and never the big business or financial systems where the big money is."

The work, by the two economists at University of the Andes in Bogotá, is part of an initiative by the Colombian government to overhaul global drugs policy and focus on money laundering by the big banks in America and Europe, as well as social prevention of drug taking and consideration of options for de-criminalising some or all drugs.

The economists surveyed an entire range of economic, social and political facets of the drug wars that have ravaged Colombia. The conflict has now shifted, with deadly consequences, to Mexico and it is feared will spread imminently to central America. But the most shocking conclusion relates to what the authors call "the microeconomics of cocaine production" in their country.

Gaviria and Mejía estimate that the lowest possible street value (at $100 per gram, about £65) of "net cocaine, after interdiction" produced in Colombia during the year studied (2008) amounts to $300bn. But of that only $7.8bn remained in the country.

"It is a minuscule proportion of GDP," said Mejía, "which can impact disastrously on society and political life, but not on the Colombian economy. The economy for Colombian cocaine is outside Colombia."

Mejía told the Observer: "The way I try to put it is this: prohibition is a transfer of the cost of the drug problem from the consuming to the producing countries."

"If countries like Colombia benefitted economically from the drug trade, there would be a certain sense in it all," said Gaviria. "Instead, we have paid the highest price for someone else's profits - Colombia until recently, and now Mexico.

"I put it to Americans like this - suppose all cocaine consumption in the US disappeared and went to Canada. Would Americans be happy to see the homicide rates in Seattle skyrocket in order to prevent the cocaine and the money going to Canada? That way they start to understand for a moment the cost to Colombia and Mexico."

The mechanisms of laundering drug money were highlighted in the Observer last year after a rare settlement in Miami between US federal authorities and the Wachovia bank, which admitted to transferring $110m of drug money into the US, but failing to properly monitor a staggering $376bn brought into the bank through small exchange houses in Mexico over four years. (Wachovia has since been taken over by Wells Fargo, which has co-operated with the investigation.)

But no one went to jail, and the bank is now in the clear. "Overall, there's great reluctance to go after the big money," said Mejía. "They don't target those parts of the chain where there's a large value added. In Europe and America the money is dispersed - once it reaches the consuming country it goes into the system, in every city and state. They'd rather go after the petty economy, the small people and coca crops in Colombia, even though the economy is tiny."

Colombia's banks, meanwhile, said Mejía, "are subject to rigorous control, to stop laundering of profits that may return to our country. Just to bank $2,000 involves a huge amount of paperwork - and much of this is overseen by Americans."

"In Colombia," said Gaviria, "they ask questions of banks they'd never ask in the US. If they did, it would be against the laws of banking privacy. In the US you have very strong laws on bank secrecy, in Colombia not - though the proportion of laundered money is the other way round. It's kind of hypocrisy, right?"

Dr Mejia said: "It's an extension of the way they operate at home. Go after the lower classes, the weak link in the chain - the little guy, to show results. Again, transferring the cost of the drug war on to the poorest, but not the financial system and the big business that moves all this along."

With Britain having overtaken the US and Spain as the world's biggest consumer of cocaine per capita, the Wachovia investigation showed much of the drug money is also laundered through the City of London, where the principal Wachovia whistleblower, Martin Woods, was based in the bank's anti-laundering office. He was wrongfully dismissed after sounding the alarm.

Gaviria said: "We know that authorities in the US and UK know far more than they act upon. The authorities realise things about certain people they think are moving money for the drug trade - but the DEA [US Drugs Enforcement Administration] only acts on a fraction of what it knows."

"It's taboo to go after the big banks," added Mejía. "It's political suicide in this economic climate, because the amounts of money recycled are so high."

Comment: Of course the profits flow northwards! What did people think was happening? That the CIA, MI6, the Mossad and banksters in Switzerland and Wall Street were just gonna let the locals rake it in? Like all other industries, the third world is nothing to the international banking mafia but a slave plantation, useful for only one thing: harvesting energy from.