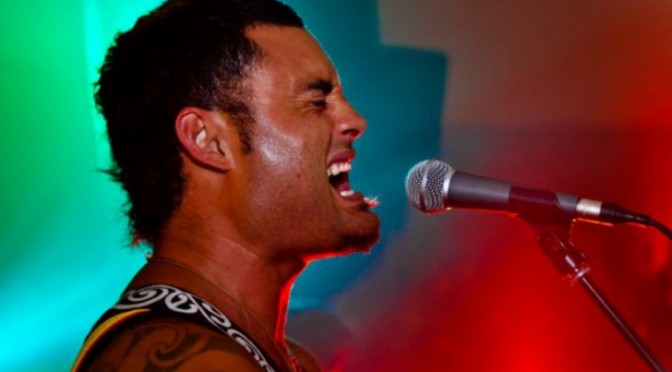 When I sat down to interview Matiu Te Huki “The Hook” the Moari-Italian singer based in New Zealand,  I realised his story would one be that the majority of people waking up on this planet would absolutely resonate with.  Not to mention, his music was moving through crowds, causing a new type of connection between people I have not seen at a performance before.
At the beginning of making music ten years ago, he was using sound to facilitate healing in the mental health field with troubled youth. He was thinking he was going be a writer of songs or plays but one day had an epiphany that he was going to write his own music and that was going to be his purpose. His music at the beginning was rooted in heavy reggae beats, bringing forth corruption awareness, illuminating the darkness, and focusing on how to battle the negative forces on this planet. Focusing on anti-everything but finally came to the conclusion later that he wanted to embody the bringer of light and focus on the positive aspects within this realm. Completely realising that what we focus on manifests in physical form and while we must stand up for what is right, we can do it from the heart center. In my opinion, the song attached below: Magic, is a perfect representation of the shift that an awakening being on this planet has when they realise their true manifestation potential with small shifts in thought. Take a listen to the lyrics closely and you will hear what I mean, enjoy the awesome sacred geometry in the background

Matiu talked about his passion for peaceful activism, specifically the boat from New Zealand Greenpeace named The Rainbow Warrior, where he got the inspiration to write the song Rainbow Warrior. He said he always felt like the warrior there to stand up for what is right in the world but that after listening to spirit that soon turned him into the peaceful warrior. If you watch the music video you will see that Matiu is really doing the work to unite the rainbow tribe together once again. Constantly getting people to sing along with him and sometimes inviting people up on stage to shine by his side or share the mic! He really ignites the hearts of all who surround him and shows them their potential. I can’t help but to relate this song to the Hopi Prophecy, “When the earth is dying there shall arise a new tribe of all colours and all creeds. This tribe shall be called The Warriors of the Rainbow.” When I listen to the lyrics, I feel my heart unite with all of the beings on the planet. For me it has been a kind of anthem that unites the world tribe of so many colours and backgrounds.

Matiu is a healer, not just with his music but also with his passion and involement within his community. He supports (in my opinion) what the definition of a true connected sacred male is. Channeling spirit through his song,  he works traveling around New Zealand as a Master of Ceremonies, he helps reconnect children in his community to their cultural knowledge, and honors the sacred feminine with his song. He talks about the fact that men often forget to smile at one another, how there is potent medicine in a simple grounded smile. Smiling from a grounded centered male to fellow brothers, to small children who view tall men as intimidating towers or offering a kind smile to a elderly woman to let her know she is safe; transforms and supports your community. His passion is in showing humanity that there is power and strength in being kind and you can really feel that in his performances. I will leave you with this song from Luminate Festival in New Zealand, a song that shows the connection Matiu has to helping men create a safe space for women while rooting in Maori strength with his Haka to bond with the world tribe. Kia Ora, Whanau!
To hear more of Matiu Te Huki:
Visit his Website,  Subscribe to his YouTube Page,  and Check out his Facebook!