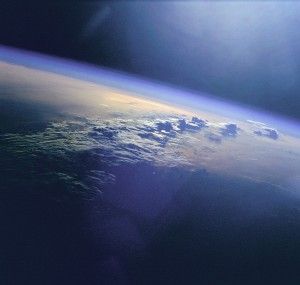 © n/a
Climate change alarmists are hard at work, pushing their agenda of man-made global warming which ultimately leads to global carbon taxing through the governance of the UN.

Daniel Sarewitz, professor of science and society and co-director of the Consortium for Science, Policy and Outcomes at Arizona State University, asserts that:
There is not any serious debate about whether anthropogenic climate change is happening. Scientists are certain about that, and it is unfortunate that the national debate is lagging so far behind.
The move toward convincing the general public that man-made CO2 is responsible for global warming partially stems from a study from 2000 which was co-authored by James Hansen, a prominent eco-fascist. Hansen's team admits that, "rapid warming in recent decades has been driven mainly by non-CO2 greenhouse gases . . . not by the products of fossil fuel burning, CO2 and aerosols." And then admonishes that the method of controlling emissions output should "focus on air pollution has practical benefits that unite the interests of developed and developing countries. However, assessment of ongoing and future climate change requires composition-specific long-term global monitoring of aerosol properties."

As Hansen states that global warming is not man-made, he still desires to see global governance over emissions regulation and carbon taxation mandated by international law to reduce this imaginary problem.

The debate over climate change originated with the 2007 report of the UN Intergovernmental Panel on Climate Change (IPCC). The IPCC emphatically concluded without empirical scientific data, but rather projected conjecture used to create computer models that claimed human activity was the sole cause of the earth's rising temperature.

The IPCC is concerned about the world's governments not cutting carbon emmissions enough to reduce the CO2 output into the atmosphere.

John Reilly, co-director of the Massachusetts Institute of Technology's (MIT) Joint Program on the Science and Policy of Global Change and an expert on climate economic models believes this is the crux of the problem. Reilly blames the governments and their leaders for failing to take the appropriate steps to reduce emissions; in particular China and the US.

He claims that the European Union has rising greenhouse emissions that they have failed to deal with "properly".

In 2009, Reilly and colleges from MIT collaborated with researchers from Penn State, the Marine Biological Institute in Massachusetts and the U.S. Environmental Protection Agency. They decided to create computer models for climate change projections with the same major flaw that the IPCC made in their models; they did not account for the erratic weather patterns indicative to earth.

The study also falsely asserted that:
The Arctic would warm up 3 times as predicted by the IPCC
Severe weather patterns would emerge
Ocean levels would rise dramatically
The oceans would endure acidification
Reilly proudly touted:
The IPCC suite of scenarios provide ... a bit too rosy of a picture. Our study shows that without action, there is virtually no chance that we won't enter very dangerous territory.
This year, MIT conducted another "projection" that warned if countries did not achieve emissions cuts, as they promised the UN, then the world's temperature would rise by over 4 degrees.

Quite a scare tactic.

John Christy , atmospheric scientist at the University of Alabama in Huntsville, IPCC author in 2001 and a well-known skeptic of human-caused climate change, said:
I'm surprised there are those who think the IPCC is too conservative. I think the simple evidence is very clear - the IPCC models overestimate the warming of the climate system.
The IPCC has not commented on their erroneous climate change models.

The IPCC's task was not to create accurate predictions about how the earth would be affected by man's influence on the biosphere. Their purpose was to engage the world's governments in a game of control and relinquish of power to the UN over an assumption that could not be verified.

Or so they thought.

Through the use of geo-engineering (chemtrails) governments have been dumping massive amounts of pollutants into the upper atmosphere that has caused the thunderclouds to trap heat which has had a dramatic effect on the surface temperature.

After spending more than a decade observing the glaciers in Greenland, scientists have concluded that they are not melting with the veracity that climate change alarmists would have us believe.

This means that the warning of several feet of rising seas that was conveyed by Al Gore in his film An Inconvenient Truth, will actually only be a rise by inches.

According to a study published in the journal Nature, plants are flowering up to 8 times faster than were projected. The authors of the study admit that their previous summations were incorrect and based on erroneous information provided by the IPCC.

Data from NASA satellite, Terra, showed that the earth is naturally expelling heat out into space from the upper atmosphere. This cracks the crux of the climate change alarmist's theory that the earth's temperatures are rising because the heat is trapped.

However, to counter this natural phenomenon, the excessive use of chemtrails has been deployed by governments of industrialized nations to "cause the problem" they claim is the fault of man's CO2 emission.

The UN's agenda, through the IPCC, globalist colleges like MIT and Penn State, and those scientists that have been bought off to assist in peddling false data as empirical scientific research are scaring both world leaders and the general public into buying their climate change nightmare for the purpose of usurping international control over sovereign nations.

So far, unfortunately, they have been quite successful.

» Deep Sea Volcanos Replace “Consumers” as Blame For Global Warming/Climate Change
» How to green the world's deserts and reverse climate change | Allan Savory
»  Climate change hoax COLLAPSES as new science finds human activity has virtually zero impact on global temperatures
» In 24 hours, the world's top scientists will release the most important report in decades: proving once and for all that climate change is a massive threat
» Climate Change Will Kill Us All Via Taxation