Vatic Note:   Well, this is certainly one of the most interesting pieces I have read in a long time.  As you know, I keep reminding you of the powers that be's plan to globalize using aliens as the justification.  Notice below in the beginning of the article that its the "Royal Society" that did the study, so beware.   England is the force behind globalizing and the royal family are khazars.  Two strikes against them, so be cautious and reluctant to buy everything they say.  We have already stated that its likely aliens exist, but does that mean they are a threat to this planet after all these centuries of existance.

No, it could simply mean that they are checking on us to make sure their creations are moving along nicely.  Or it could mean they are here to help us deal with these advanced interlopers.   We know nothing about them, "If they exist and are here",  so none of us can say, with certainty, who they are, where they are and why they are here, if they are at all.  As usual,until something is proven one way or the other "BY A RELIABLE SOURCE", than I keep an open mind, until such proof does arrive.

What this below shows is archaeological evidence that something  of intelligent design has created these things for us to find much later.  There was DNA on these found objects and that is what was studied and the DNA could not be identified as just human, rather some unknown species, as well, leading the researchers to believe that Humans bred with a completely unknown species.   Add that to the other finds, like burial mounds,  pictures on cave walls,  writings by ancients that go back a long way which adds to the possibility that these aliens or unknowns that bred with us, did or still does exist. 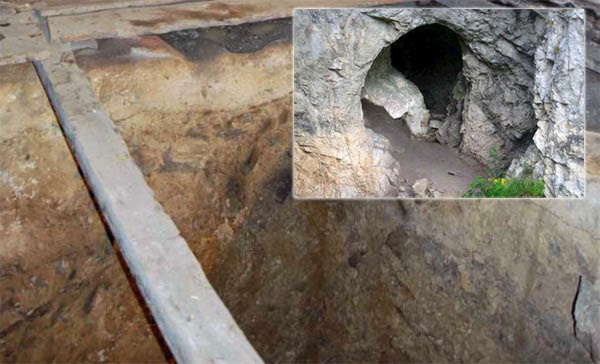 A new study presented to the Royal Society meeting on ancient DNA in London last week has revealed a dramatic finding – the genome of one of our ancient ancestors, the Denisovans, contains a segment of DNA that seems to have come from another species that is currently unknown to science.

The discovery suggests that there was rampant interbreeding between ancient human species in Europe and Asia more than 30,000 years ago. But, far more significant was the finding that they also mated with a mystery species from Asia – one that is neither human nor Neanderthal.

Scientists launched into a flurry of discussion and debate upon hearing the study results and immediately began speculating about what this unknown species could be.  Some have suggested that a group may have branched off to Asia from the Homo heidelbernensis, who resided in Africa about half a million years ago. They are believed to be the ancestors of Europe's Neanderthals.

However others, such as Chris Stringer, a paleoanthropologist at the London Natural History Museum, admitted that they “don’t have the faintest idea” what the mystery species could be.

Traces of the unknown new genome were detected in two teeth and a finger bone of a Denisovan, which was discovered in a Siberian cave. There is not much data available about the appearance of Denisovans due to lack of their fossils' availability, but the geneticists and researchers succeeded in arranging their entire genome very precisely.

"What it begins to suggest is that we're looking at a 'Lord of the Rings'-type world - that there were many hominid populations," Mark Thomas, an evolutionary geneticist at University College London.

The question is now: who were these mystery people that the Denisovans were breeding with?

John Jensen wrote on 19 November, 2014 - 20:52 Permalink
What kind of 'evidence' are you referring to? If you mean 'physical artifacts', how do you know there aren't any in places you have neither the training, security, access, education or 'need to know' to view or inventory them?

The fact that you seem to be denying credible eyewitness reports is laughable. In the Western world's legal systems, a person can BE PUT TO DEATH on the basis of three reliable witnesses of an event that may incur the death penalty. (Capital Rape, Capital Torture, Capital Treason, Capital Murder, etc.) If it is good enough for Western legal systems, it should be good enough for you and everyone else.

The fact is there are hundreds of thousands of credible witnesses (and probably more) throughout history. I don't know what they saw, neither does anyone other than the eye witness. But whatever the phenomena is, the craft and occupants demonstrate some very similar characteristics.

1. Instantaneous appearances and disappearances, regardless of whether they are stationary, moving slowly or traveling at very high speeds.

2. Speed and abnormal flight characteristics which are unknown in our technologies of flight.

3. The general, though not universal lack of recognizable audio or sound properties.

4. The appearance of recognizable technology such as flashing or pulsating multi-colored lights.

5. The appearance of some form of unknown symbols or signs as coherent identifying marks.

6. The visual condition of the craft changing from various degrees of transparency to complete opaque visibility, and/or invisibility (disappearance). This condition is more common than almost any other.

7. Size and shape similarities and differences. By far the most common being the so called “disk” shape. The universal nature of this shape is depicted in pre-historic cave paintings as well as 16th century oil paintings.

8. A single craft splitting into many small elements, moving independently, then rejoining or reforming into a single unit.

9. The ability to transition between water sub surface and aerial flight without resulting water surface turbulence.

There are certainly many more individual craft event characteristics reported, but the above are generally those that are consistently repetitive.

I hesitate to make characteristic comparisons to close encounter occupants, though there are however, a few body types that are consistently reported

A. Reptilians (Earliest culture reports)
B. Grays, Tall and Short. (Current reports)
C. Pleidians, Lyrans (Tall blonde Nordic type with long white hair)
D. Others, Angels, Demons, Elves, Leprechauns, and Blue Fireplug
Most disturbing to me is the misleading and/or mis-characterization by the military, government, academia, science and the media, that often relegates craft and contact reports as ‘fringe’ or ‘kook’ category level data, rather than examining the report information in a rational and unbiased way.

Collectively, the reports undoubtedly have some general truths, even if that truth is hallucinogenic or hysterical in nature. It is possible that we are looking at something akin to a holographic image of something that was ‘recorded’ at some point in the distant (space-time continuum) which replays sporadically when local or ambient electrostatic currents attune to a frequency that displays the image. Something like how a holographic projected image might be displayed in some real world “Star Wars” like image of Princess Lea’s warnings to the Federation.

The truth is, we don’t know what the phenomenon actually is. What we do know is that the amount and kind of reports that are globally occurring on a regular basis suggest it is highly unlikely to be ‘mass hysteria”.

I don’t personally advocate the ‘Hologram Recording’ explanation as a position I can support, but until discounted, it should be considered, along with the others discussed here. Regardless of ‘What’ the phenomena is, it deserves some review regarding the nature of ‘G’ force, because of the reported collective characteristics of the aerodynamics of the crafts observed.

I am currently finishing a book with a section on the nature of the 'Electrostatic Earth' in which I make the case that 'Gravity' does NOT exist as a fixed law as set in stone by Sir Issac Newton, Dr. Albert Einstein, and later newcomers, but the 'G' force is a display of an entirely different force called the Electrostatic Field (ESF) And an ESF force, as Tesla predicted, would account for ALL of the characteristics observed in the craft-vehicle reports listed above. It certainly is not a new theory, parts of it have been discussed by some of the brightest minds in Electrical Engineering that the world has ever known, including Tesla, Aspden, Hall, Spears and many others.

I have no idea why I am responding to someone who sounds profoundly ignorant of the potential and probable realities of observed craft and occupants, which are basically the same problems relating to 'G' Force when discussing the ability of a 250,000 pound Sauropod standing upright, or a 500 pound Pterosaur winging it across an Azure sky. It simply didn't happen in current conditions of 'Gravity'.

My advice is IF you are going to make pontifical statements about a subject you show very little aptitude for, at least do a little homework on the issue.