Latest topics
» Dave ScHmIdT (Meta1Coin) sure does like to "remind" Judge Pitman of who he is! 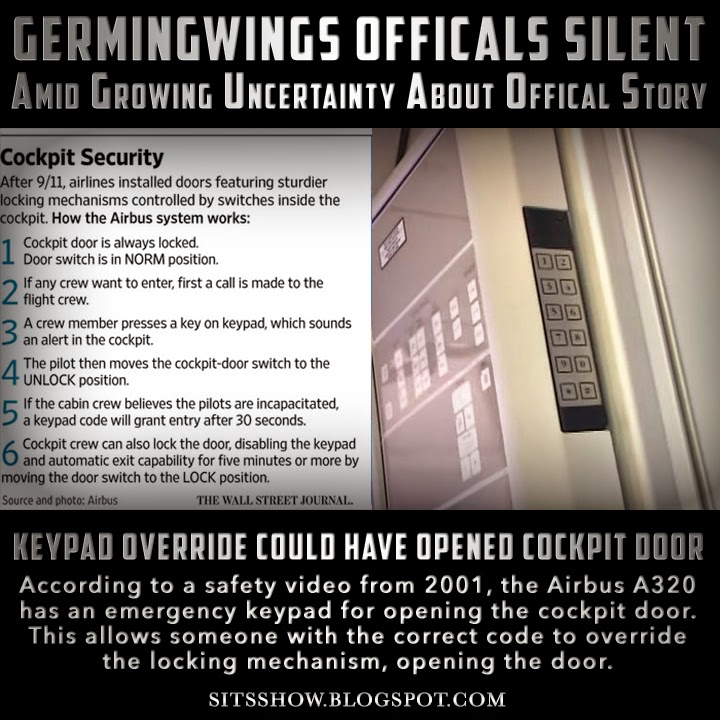 New information about the Germenwings crash of Flight 9525 last week has raised serious questions about the official story.

The media is reporting the copilot, Andreas Lubitz, voluntarily set the plan into a dive, and waited for it to crash, killing himself and 149 others. This is being painted as a suicide, with reports about Lubitz mental health circulating.

A flight recorder was recovered shortly after the crash, where Lubitz is heard breathing normally, as the commanding pilot bangs on the door aggressively, pleading with lubitz to let him in.

This in and of itself, brings many questions to mind, and as we covered in Suicide or 'Manchurian Candidate?' ), suggests that Lubitz may have been in an altered state.

A reasonable conclusion to draw is that this is yet another staged event.

The below article, raises many questions.

According to a safety video from 2001, the Airbus A320 has an emergency keypad for opening the cockpit door. This allows someone with the correct code to override the locking mechanism, opening the door. This data has several possible interpretations.

At this point there is not enough information to make a definitive conclusion.

It could just have been a malfunction, or human error on the part of the pilot. In this case, Lubitz' behavior still brings a great deal into question, as he fits the Manchurian Candidate profile.

If the lock was intentionally tampered with, the Manchurian Candidate theory remains a strong possibility, given all the other similarities between Lubitz and James Holmes, the Batman Massacre killer from mid 2013.

Finally, the lack of wreckage and human remains suggests that the recorder itself could be staged. There may not have been a plane at all in this instance.

What we do know is that the media is remaining silent on the keypad issue. It would be reasonable to assume that if there was a simple explanation for the keypad not being used, it would have been addressed when questions arose about it.

The safety of cockpit doors on commercial planes has been brought sharply into focus with the reports that one of the pilots on the crashed Germanwings flight may have been locked out of the flight deck.

Audio recordings recovered from the Germanwings Airbus A320, which crashed on Tuesday, killing all 150 on board , suggest one pilot was outside the cockpit and unable to get back in, despite banging on the door from the outside, the New York Times has reported.

After the September 11 attacks, the US federal aviation authority (FAA) dramatically ramped up security on planes, and increased regulations around cockpit safety. Across the globe governments and the aviation industry made huge investments to enhance security in air travel, including strengthening doors to the cockpit.

An A320 operating manual for planes used by the Royal Jordanian airline shows a forward opening door with three electric locking strikes.

“In the case of an electrical supply failure the door is automatically unlocked, but remains closed,” reads the manual.

It is equipped with a manual escape hatch but that is only accessible from the inside.

“The danger of the keypad is if the hostess knows the code and someone wants to get in there … I would think a keypad would be a breach of the international regulations,” he said.

“The integrity only works because the only people who can open it are the ones inside the flight deck.”

Protocols and standard procedures around what happens when a pilot leaves the cockpit mid-flight vary according to country and airline.

A flight attendant taking the seat of an absent pilot to ensure there are always two people in the cockpit, and/or blocking access to the open door with a trolley, are often seen on US flights, but not necessarily on others, Hansford said. For instance it is not a requirement on Australian flights.

Keith Tonkin, aviation expert and managing director of Aviation Projects consultancy, said the reports of the Germanwings flight are troubling in that they show “if one was outside and couldn’t get back in again you would be unable to influence the outcome of flight”.

“The situation raises a lot of questions and makes the processes in place seem inadequate ... if the person inside the cockpit decides to do something and prevent access by other people.”

Less than a month after the September 11 attacks, the FAA began publishing Special Federal Aviation Regulations “to expedite modification of cockpit doors in the US fleet”.

“The FAA determined that the security risk outweighed potential safety risks associated with the Phase I fix and granted short-term relief from certain airworthiness requirements, such as how the door performs during an unlikely rapid decompression,” read a 2003 press release.

Former FAA chief counsel, David Leitch, told a US law school in 2002 that doors were previously weaker because of concerns different air pressures in areas of a plane could cause it to break apart.

The A320 operating manual states the door is “fully compliant with rapid decompression requirements”.