Today at 7:51 am by PurpleSkyz

Yesterday at 9:44 pm by PurpleSkyz

Yesterday at 9:39 pm by PurpleSkyz

Yesterday at 9:25 pm by PurpleSkyz

Yesterday at 9:18 pm by PurpleSkyz

Yesterday at 9:15 pm by PurpleSkyz

Yesterday at 9:07 pm by PurpleSkyz

Yesterday at 9:01 pm by PurpleSkyz

Yesterday at 12:49 pm by Kcantrell

OUT OF MIND » THE INSANITY OF REALITY » FINANCIAL COLLAPSE » Portugal, Iceland, Hungary and Israel to join China-backed AIIB investment bank 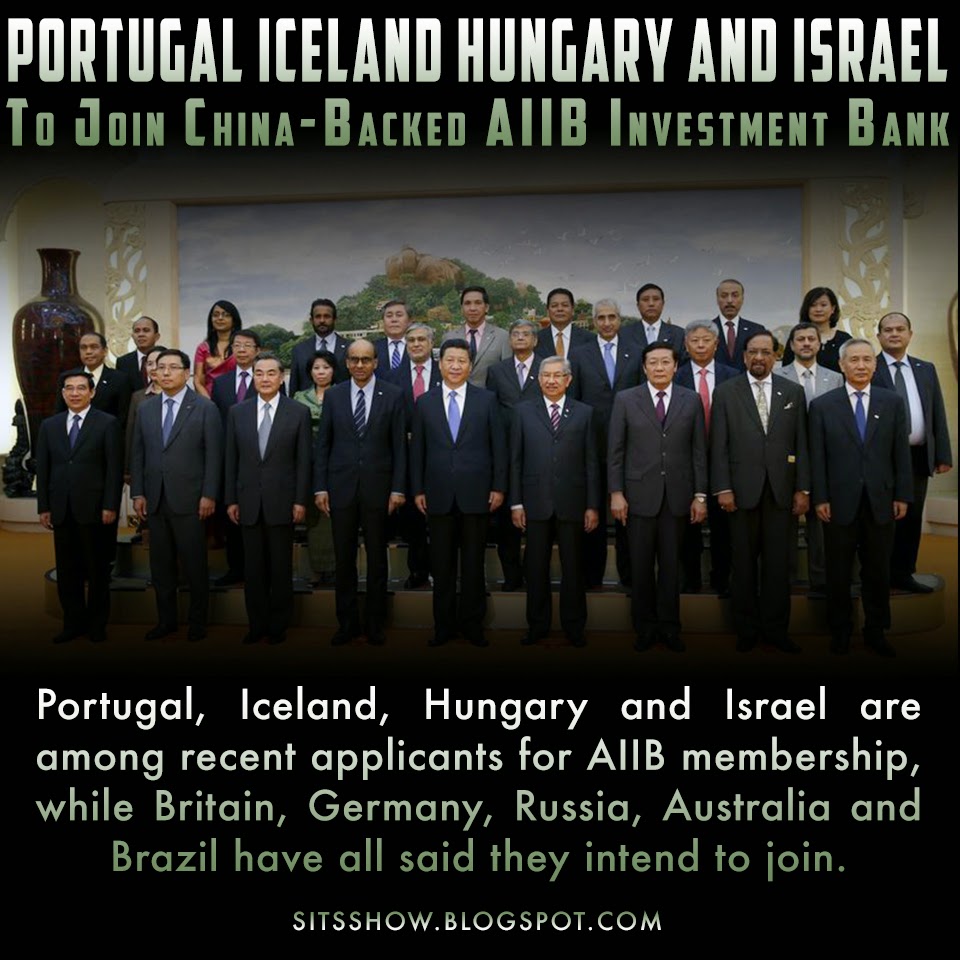 For other updates about the AIIB check here.
- Justin
Source - Reuters

More than 40 countries, including Australia, South Korea, Britain, France, Germany and Italy, have said they would sign up to the AIIB, with Japan and the United States the two notable absentees.

"I would like to announce here that we will join the Asian international development bank," Orban, referring to the AIIB, told a news briefing during a visit to Kazakhstan.


"We will follow the example of Kazakhstan," he added, giving no further details.

China set a March 31 deadline to become a founding member of the AIIB, an institution that could enhance Beijing's regional and global influence.

Washington initially tried to dissuade its allies from joining the AIIB, seeing it as a challenge to the World Bank and Asian Development Bank over which the U.S. exerts considerable influence, but changed tack after many signed up for it. (Reporting by Raushan Nurshayeva; Additional reporting by Krisztina Than in Budapest; Writing by Dmitry Solovyov; Editing by Alison Williams)
_________

LISBON/SHANGHAI (April 2): Portugal has applied to be a founding member of the Chinese-led Asian Infrastructure Investment Bank (AIIB), with the aim of promoting its business interests in Asia, the government said on Thursday.

More than 40 countries have applied to join the AIIB, with the United States and Japan as notable absentees.

"Portugal's participation would create better conditions for Portuguese companies taking part in projects in the Asian region, where the country has been intensifying its economic and trade relationships," the foreign ministry said in a statement.

It said it had applied for membership on March 31, the deadline for applications.

Portugal has historic cultural and trade links with its former colonies in India's Goa, China's Macau and East Timor.

After higher exports helped the economy climb out of a deep recession last year, Lisbon has said it aims to further boost exports as a share of gross domestic product.

The AIIB is seen as a potential rival to established lenders the World Bank and Asian Investment Bank, which are dominated by the United States and Japan.

Portugal, Iceland, Hungary and Israel are among recent applicants for AIIB membership, while Britain, Germany, Russia, Australia and Brazil have all said they intend to join.

OUT OF MIND » THE INSANITY OF REALITY » FINANCIAL COLLAPSE » Portugal, Iceland, Hungary and Israel to join China-backed AIIB investment bank

» Is Portugal the Next Iceland? President May Challenge the Constitutionality of Austerity
» China’s AIIB To Radically Change The World Competing Against Rothschild’s IMF.
»  China Launching Gold Backed Worldwide Currency - Now the Americans will have to find a reason to go to war against China !! Thursday - Aug 30, 2012, 12:55pm (GMT+5.5
» Rockefellers Join Soros & Rothschilds In Cryptocurrency Investment Plans
» #QTard Drama Theater - QAnon is Backed by Israel? plus more