GEOLOGICAL UPHEAVAL: Sinkholes Keep Popping Up Across The Globe

GEOLOGICAL UPHEAVAL: Sinkholes Keep Popping Up Across The Globe Fri Apr 03, 2015 6:54 am

April 2, 2015 - EARTH - Here are several of the latest reports of sinkholes across the globe as monumental planetary transformations continue.

No injuries were reported after a car fell into a large sinkhole at a west-end Toronto parking lot Wednesday morning.

Toronto police spokesperson Cst. Victor Kwong said the hole was originally reported the day before but the vehicle fell in today.

A photograph posted on Twitter by Metrolinx spokesperson Anne Marie Aikins shows the car's front end completely immersed in the ground with its trunk and roof visible.

The sinkhole is located at parking lot on Todd Baylis Blvd. at Industry St. near the Black Creek Dr. area.

Aikins said on Twitter the hole is not linked to the Crosstown Eglinton underground construction.

Metrolinx, the province's regional transit agency, said underground tunneling for the Crosstown project may have contributed to a damaged roadway on Eglinton Ave. W. earlier this month which closed a portion of the street for several weeks.

Police say the parking lot is off-limits to drivers and employees at a nearby building have been told to go home for the day. - Global News.

The state Department of Transportation reported closures on two local roadways due to incidents that occurred earlier in the week.

There was also a two-vehicle accident in Baltimore City at the corner of Calvert and Centre streets that occurred just after rush hour. Baltimore City DOT reported at 10:05 a.m. that traffic impact was light.

The Maryland Transportation Authority said that the Curtis Creek Drawbridge is scheduled to open at noon. 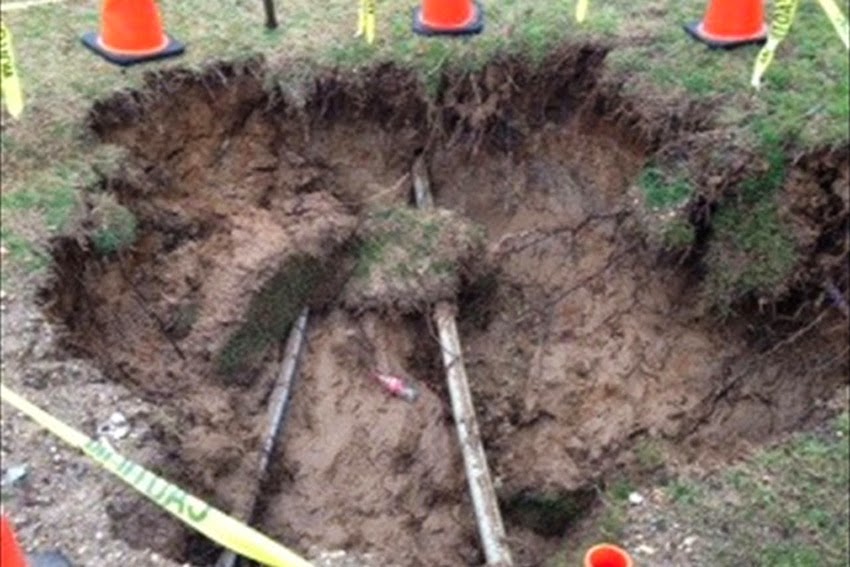 In the seemingly quiet Longhills Village neighborhood in Benton, two homeowners have found something a little different.

"It's really not typical at all," Norma Mccullough said.

In the last few weeks, Mccullough has noticed a sinkhole in her front yard.

"We started seeing this hole between my house and my neighbors and as we got more rain the hole got bigger," Mccullough said.

Neighbors took pictures of the hole as it got larger and larger. When the rain came a few weeks ago it grew even quicker.

"It just took on a life of its own. It got rather large and deep," Mccullough said.

That's when the neighbors called the city for help, Mccullough says before they lost a child or an animal in the hole. Or before a close tree or even a home got swallowed inside.

"If it gets much wider then it may start impacting our foundations. There is a concern right here as a homeowner," Mccullough said.

Benton Mayor David Mattingly says after crews got into the hole they realized there were holes in the underground water pipes.

"We will have to replace the collapse pipe," Mayor Mattingly said.

The price tag to fix it is about $22,000. Mattingly has called an emergency city meeting on Thursday to get the amount to fix it approved. Once that happens the hole is expected to get fix and Mccullough can get back to normal life.

"We look forward to getting this resolved and getting our yard back," Mccullough said. - FOX16.

April Fool's Day got off to a rough start for an East Hills woman whose car was trapped by a giant sinkhole in Downtown Pittsburgh.

Nayshell Sly was taking her 1-year-old daughter to day care before heading to work this morning when her Chevy Cobalt became mired in the sinkhole on Cherry Way at the Boulevard of the Allies. Water running down the alley appeared to indicate a leaking pipe, and the pavement recently was patched there, indicating prior problems.

"I thought it was just mud," Ms. Sly said as she waited for a tow truck to extricate the vehicle. No one was injured and daughter Asiya, in her mother's arms, appeared to be taking the situation in stride. - Post Gazette. 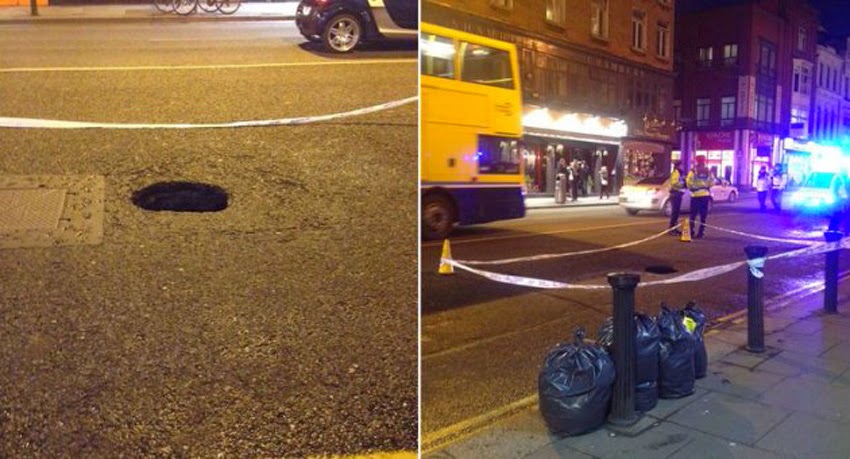 A two-foot-wide, 6-foot-deep sinkhole opened up on Dublin’s Dame Street on Tuesday evening, rerouting traffic throughout the city’s centre.

On further inspection, city officials discovered the hole was much larger beneath the tarmac’s surface and could have caused “considerable damage” if it had given way.

Originally assumed to be caused by water damage to foundations beneath the road surface, some experts now believe the leading suspect of the road’s collapse is a tunnel leading to a 19th century brothel.

Historian Gerry Cooley told the Evening Herald that an old cellar discovered in the hole could be part of a “long-rumoured tunnel” used by 1800s politicians as a route to brothels.

"The King of England closed down the House of Commons and House of Lords in Ireland during the time when politicians were spending too much time in the brothels," Cooley said.

"They built the tunnels from what is now the Bank of Ireland on College Green. If you dig deep enough anywhere around that area you are likely to find medieval artefacts or a part of the old 17th-to-19th century Ireland.

"It could be the remnants of the residence of Chichester, or the tunnels which politicians would use to sneak out to the pubs or gentleman’s clubs.”
Dublin City Council confirmed the finding of “an old cellar,” and announced that it was being filled in with concrete. - Yahoo.


Sinkhole opens up and swallows man in Pennsylvania


A sinkhole has been covered alongside the W.D. Mansfield Memorial Bridge underpass carrying West Fifth Avenue traffic from McKeesport onto Monongahela Avenue in Glassport.

But it's uncertain who's responsible for its maintenance, three days after a man was injured falling into the sinkhole as it opened up under him.

"That is not the department's roadway," PennDOT District 11 spokesman Steve Cowan said. "My documents do not show who is the owner of the road, but I would think it would either be the municipality or the county."

Glassport and Allegheny County officials said they are looking into the matter.

The hole is on the Glassport side of the municipal line, alongside a road that carries traffic under the county-maintained Mansfield Bridge.

"There has been no determination made as to whose responsibility it is to address the sinkhole," county spokeswoman Amie Downs said late Monday. "But we are partnering with the municipality to determine how best to address the issue."

Rescuers pulled a man from the sinkhole after he had the presence of mind — and could access a cellphone signal — to call for help.

According to Trib Total Media news exchange partner WPXI-11, the man was flown to a Pittsburgh hospital.

The television station said the man is in his 40s and was walking to meet a friend at a convenience store when the accident occurred.

He was roughly 10 feet down," Glassport Assistant Chief Bruce Snyr told WPXI. "I don't understand how he wasn't hurt more than he was.""

McKeesport, Glassport and Pleasant Hills firefighters were called to the scene.

According to Allegheny County real estate records, CSX owns much of the riverside property along Monongahela Avenue in Glassport. A CSX spokesman said late Monday that he was looking into the situation. - Trib Live.


A gaping sinkhole has opened up in Riverdale, creating safety issues for people in the neighborhood.

The Department of Environmental Protection told News 12 that the hole was repaired yesterday afternoon. However, the spot was still cordoned off on Tuesday creating a tricky four-way intersection for drivers.

Assemblyman Jeff Dinowitz's office looked more into the cause of the hole, and says the DEP inspectors determined that there were leaks to the 12-inch cast iron water main running underneath the street.  - News 12.