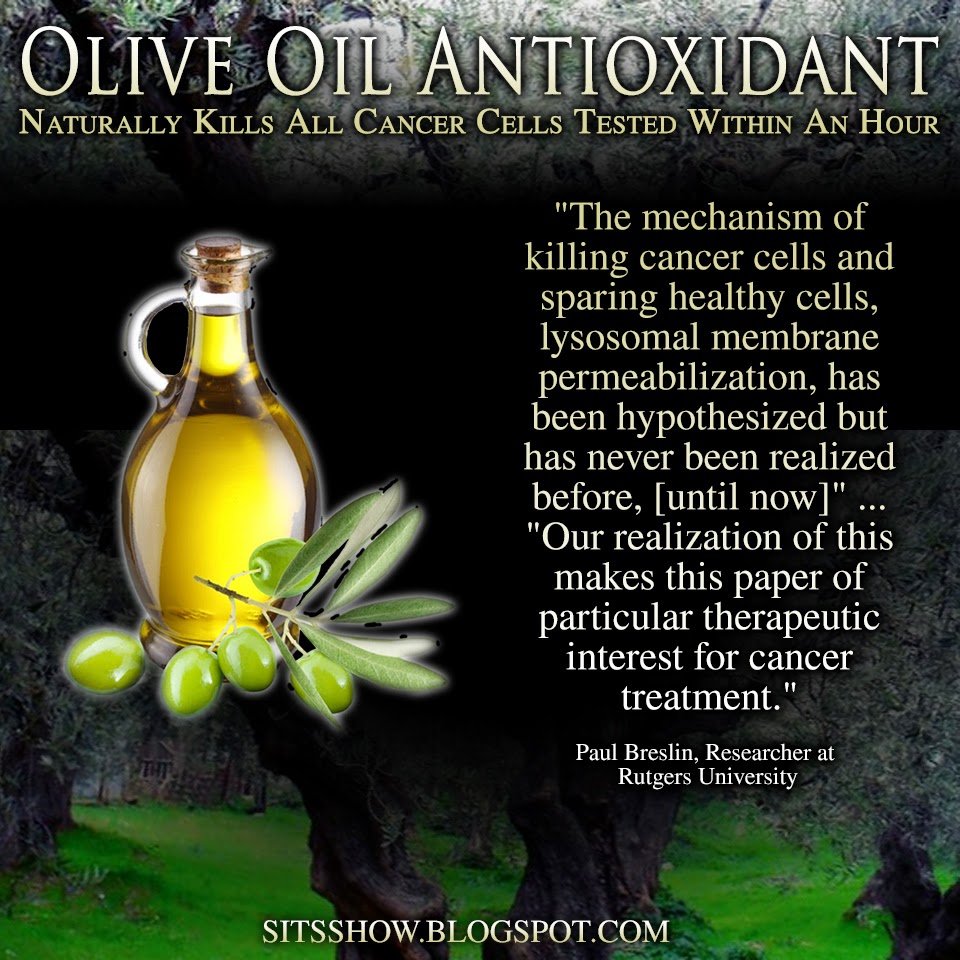 The major antioxidant compound found in olive oil is capable of killing cancer cells in less than an hour while leaving healthy cells unharmed, according to a study conducted by researchers from Rutgers University and Hunter College and published in the journal Molecular & Cellular Oncology.

The researchers hope that this may lead to a targeted cancer therapy based on this molecule.

"The Mediterranean diet is known to be associated with a reduced risk of many different kinds of cancer," researcher Paul Breslin said. "Whereas the entire diet likely has many benefits, this study points directly to the olive oil phenolic, oleocanthal, as playing an especially important role in these observations. As more people turn to the Mediterranean diet as a healthy life option, oleocanthal is growing in its significance as a key active component of this diet."

Many healthful plant compounds are known to induce apoptosis, or programmed cell death, in cancer cells by targeting a specific protein that controls the process. Yet apoptosis typically takes between 16 and 24 hours to complete, and prior studies had shown that cancer cells exposed to oleocanthal died within 30 to 60 minutes of exposure. The oleocanthal was acting much too fast, suggesting some mechanism other than apoptosis.

"We needed to determine if oleocanthal was targeting that protein and causing the cells to die," Breslin said.

In the new study, the researchers discovered that oleocanthal was indeed killing cancer cells by a different mechanism. Rather than targeting the apoptosis protein, oleocanthal was breaking apart the lysosomes of cancer cells. These organelles are responsible for processing cellular waste, and are much larger and more fragile in cancer cells than in healthy cells.

"Once you open one of those things, all hell breaks loose," Breslin said.

The study showed that once the lysosomes burst apart, critical life-sustaining functions in the cancer cells began to break down.

Significantly, oleocanthal did not harm nearby healthy cells. Instead, it put them into a kind of stasis or hibernation for about a day. After that time, the cells resumed normal, healthy functioning with no apparent lasting effects.

"The mechanism of killing cancer cells and sparing healthy cells, lysosomal membrane permeabilization, has been hypothesized as a possible mechanism of effectively killing cancer cells and sparing healthy tissues but has never been realized before," Breslin said. "Our realization of this makes this paper of particular therapeutic interest for cancer treatment."

It will still be many years, however, before an oleocanthal treatment could become available. That's because complete organisms are much more complex than cell cultures, and the olive oil compound may act differently in the human body.

Olive oil and its component parts have been shown to have a wide variety of health benefits, including strengthening the immune system, preventing osteoporosis, protecting the body from air pollution, and possibly helping prevent dementia. The healthy fats in olive oil have also been shown to boost brain health, and may even improve memory.

A 2010 study conducted by researchers from the Universitat Autonoma de Barcelona also suggested that olive oil may help prevent cancer. The researchers found that olive oil led to changes in the signaling pathways of breast cancer cells, leading to apoptosis and preventing DNA damage to healthy cells.

These findings are particularly significant because a high fat diet is typically considered a risk factor for breast cancer. Yet olive oil and certain other "healthy" fats may actually have a protective benefit.

A moderate intake of virgin olive oil has instead been linked with lower rates of cancer, heart disease, and numerous other health problems.