By Rena, Learning Mind, April 5, 2015
His exuberant works of art are extremely thought-provoking for every viewer. Intensely vivid dreamlike images and vibrant colors are the key elements of his style. This is the exceptional Vladimir Kush.
Kush was born in 1965 in Moscow, Russia. He studied at the Surikov Moscow Art Institute and during his military service in the Soviet Army he was assigned to paint murals. In 1987, Kush took part in exhibitions with the USSR Union of Artists. At the same time, he used to draw portraits on the streets of Moscow and creating caricatures for newspapers in order to support his family.
In 1990, he emigrated to the U.S., first in Los Angeles and then moved to Hawaii where he worked as a mural painter. After several exhibitions all over America, he opened his first gallery, Kush Fine Art, in Hawaii. Two more galleries followed in Laguna Beach and Las Vegas. His oil paintings, also available in digital prints, made his art very popular. In 2011, he was awarded First Prize in the category of Painting at the “Artistes du Monde International”.
Following the path of Salvador Dali, Vladimir Kush, this surrealist or “metaphorical realist” (as he prefers to call himself) painter and sculptor, managed to create inspired artwork and a style of his own.
As a new artist, he experimented with different styles of art, from Renaissance to Impressionism and Modern art. Apart from Dali, German romantic landscape painter Caspar David Friedrich and Dutch painter Hieronymus Bosch (the “pre-Surrealism Surrealist”) had a big influence on his work, too.
His incredible surreal paintings are mainly inspired by events and images that catch his eye while travelling or original ideas he comes up with. Kush mostly paints on canvas or board, seeking perfection in every detail, in an on-going game with the objects’ sizes, constant transformations and symbolisms full of life and vibrance. In his paintings, we distinguish the merger of animated forms with unanimated objects which results in a creation of a fantastic imagery.
Blowing clouds in a vivid blue sky, unavoidably remind us of the artwork of Magritte, and all kinds of combinations of visual elements result in a superb outcome, which excite both the eye and the soul. Butterflies are also featured very often in his paintings, as well as in his book “Metaphorical Journey”, because, to his mind, butterflies symbolize travelling, beauty and soul.
His poetic works of art aim at the viewer’s subconscious, trying to achieve a different interpretation from each one of them, by stirring up the already existing information hidden in their souls. His sculptures are small-scale and mainly inspired by images of his paintings, like “Walnut of Eden” and “Pros and Cons”. 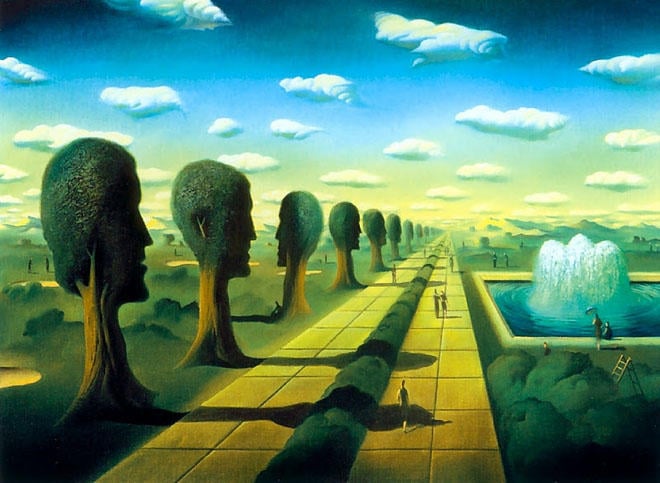 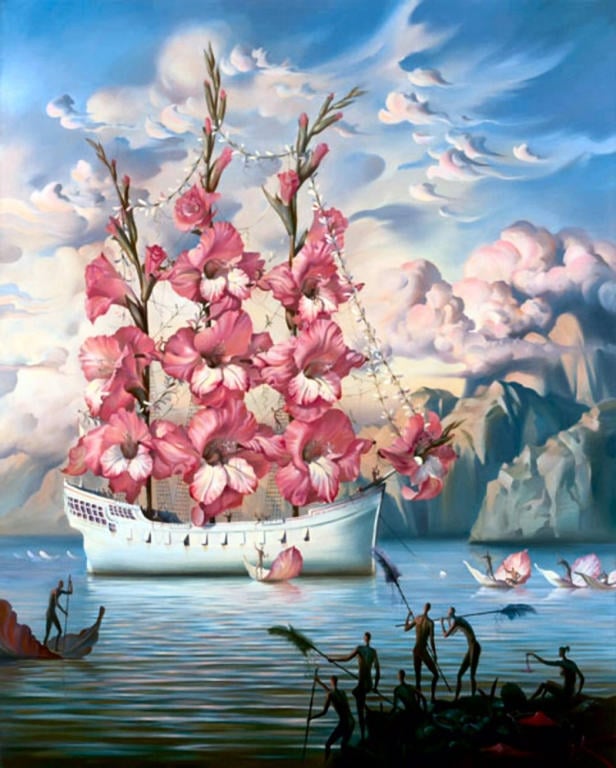 Thanks to Wes at: http://cultureofawareness.com