PDF
CLN Editor Note: Regarding HOW Joni Mitchell became afflicted with Morgellons Syndrome, the author states that people like Joni “are often physically ‘hyper-reactive to the 21st century’ and particularly to the proliferation of so many food toxins and water contaminants, airborne pollutants, and chemical surfactants.” Is it possible that the root cause of Morgellons is actually a deliberate, man-made concoction? Yes!  For details, see: “Revelations From a Man Who Helped Design Morgellons Disease (with Dr. Gwen Scott and Clifford Carnicom).”

Thanks to Joni Mitchell 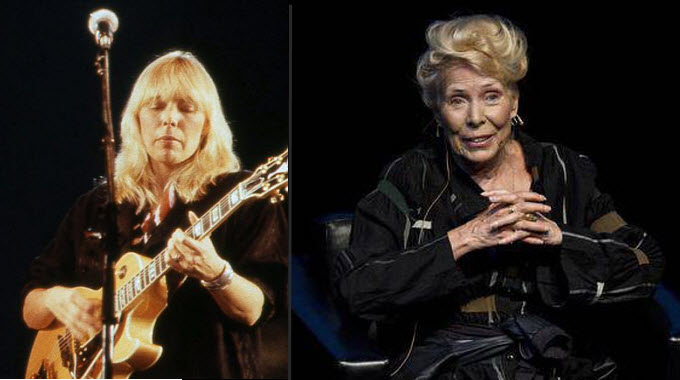 On the left: Joni Mitchell performing in 1983*; On the right: recent image of Joni from her website
By Robert Harrington | Natural Society
Posted on April 6, 2015
Joni Mitchell is one of the most beloved of folk singers from the 1960’s protest and 70’s hippie era. She endeared many fans to her simple and sincere form of “music with a conscience.”  Therefore, it is no surprise that she would somehow be chosen to confer legitimacy to a skin-crawling disease known as Morgellons.
In addition to being known as the Plague of the 21st Century, Morgellons is also known by many other names, each of which misrepresents the true seriousness or causes of the syndrome. Morgellons is in fact a multi-infection syndrome which has a number of different causative factors as well as various pathogenic micro-organisms present.
Because it has never been formally recognized by the American medical establishment as a scientifically-proven disease process, proper diagnosis is rare. Effective treatment regimens are therefore even more unlikely to be formulated by doctors who refuse to acknowledge its existence. That’s where the advocacy of famous people like Joni Mitchell can be of invaluable assistance.
Mitchell has apparently suffered from Morgellons for many years now and displays many of the classic physical symptoms experienced by the vast majority of those who have been likewise afflicted. Her psychological profile, which has become quite well known by the general public, is also very consistent with a full-blown Morgellons syndrome.
Why do Women Disproportionately Suffer from Morgellons?
Joni Mitchell’s public persona reflects the various characteristics and traits which many people, especially women, possess who suffer from this excruciating syndrome. They are typically hypersensitive emotionally and often social empaths. They are often physically “hyper-reactive to the 21st century” and particularly to the proliferation of so many food toxins and water contaminants, airborne pollutants, and chemical surfactants.
Many individuals who have Morgellons also seem to experience a series of dramatic stress events which conspire to overly tax their immune systems. After prolonged periods of being immuno-compromised, they become susceptible to a unique combination of pathogenic agents which we are all exposed to; however, these individuals physically succumb to them. Their immune response is simply not sufficient to ward of the commencement of the disease process. 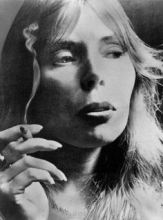 Joni Mitchell has been a lifelong smoker, which indicates one of her unhealthy ways of dealing with stress.  This highly detrimental addiction is one of the main risk factors for many women who have Morgellons.  Not only has it compromised her respiratory health over decades, it has predisposed her to an assortment of other admitted health issues and medical conditions.
When all of these are considered in the aggregate, it is very easy to understand how and why the Morgellons disease process is initiated; a hospitable internal environment has been created over a lifetime. There are usually other harmful habits and/or unwholesome lifestyle issues which further contribute to the fostering the right climate for Morgellons to emerge.
Syndromes such as Morgellons all have the same basic etiology. However, each person who suffers from Morgellons may present different symptoms, as well as experience a different timing for the manifestation of those symptoms.  This is what confounds so many physicians: No two patients seem to have the same physical and mental, emotional and psychological profiles.
The one thing that most patients do have in common is that they are usually woman. Just like Lupus and Fibromyalgia, Chronic fatigue syndrome and Multiple sclerosis, women are overwhelming targeted. Hence, the prevailing emotional temperament and mental state associated with this disease should not be underestimated. Neither should similar genetic predispositions nor predominating environmental co-factors be ignored.
Conclusion
The medical profession, while no longer male-dominated, is still heavily influenced by powerful groups like the American Medical Association. Their thinking is locked in the past when it was easier to call a hard-to-diagnose patient a hypochondriac. The truth of the matter is that were the doctor to suffer from Morgellons, his colleagues would most likely label him a hypochondriac.
It is also too easy for uninformed doctors to identify their patient’s with Morgellons as “psychosomatic” illness. That thousands of patients have now been documented with a very similar disease profile (actually a syndrome)) cannot honestly be called psychosomatic. Yes, the mind does profoundly affect the body and our health; therefore, cancer and heart disease could also be determined to have significant psychosomatic causative factors.
Perhaps the time has now arrived for the CDC and NIH, the Surgeon General and the healthcare industry to acknowledged Morgellons as the extremely serious syndrome that it is. In that way many patients, both women and men, will be validated and they can begin in earnest their very challenging process of healing.
Additional Sources:
TheDailyBeast
* “Joni Mitchell  1983″ by Capannelle – originally posted to Flickr as Joni Mitchell. Licensed under CC BY 2.0 via Wikimedia Commons
Article Source: Natural Society
Support natural health: checkout the new Natural Society Natural Health Clothing Line today and fund the message of organic living through our exclusive new designs!