The Quest to Grow the World’s Most Powerful Pot

RB-26’s Chiquita Banana strain. Photo courtesy of RB-26
It’s a glorious time to be a pothead in the US. Not only is the legalization movement gaining support across America, but we’re also smoking way better buds. In place of the leafy, stem-filled weed that prevailed decades ago, we now have access to meticulously crafted cannabis flowers tinted white with THC crystals. These days, the weed is prettier, more fragrant, and gets you much, much higher than it ever did before.
This didn’t happen by accident. Growers have been hard at work, diligently crossing high potency strains to increase the amount of THC (tetrahydrocannabinol), the central psychoactive and therapeutic chemical in cannabis, in their plants.
In 1978, your average weed had a THC level of 1.37 percent, according to the National Institute on Drug Abuse; in 2008, the average was 8.5 percent. However, in recent years, as state-level marijuana programs have developed, the suddenly-not-illegal-anymore cultivation community has been able to share information and fine tune their methods, resulting in some of the highest THC levels ever seen. Dispensaries all over Colorado boast strains with 20 to 25 percent THC, and now a Denver area grower who goes by RB-26 claims to have achieved the first strain to consistently test at 33 percent.
In 12 consecutive tests conducted by the Colorado-based testing company CannLabs, RB-26’s Gorilla Glue 4 and Chiquita Banana strains tested between 30 percent and 33.5 percent THC, numbers that raise equal amounts of excitement and skepticism. Any smoker would love to try a strain that is a third THC by weight, but is that volume even possible? According to RB-26, it’s just a matter of growing methodology.
“I’m an extremely data-driven person,” RB-26 told me at his Denver home. “I log everything in little journals, and I’ll do tons of tests if I change anything in the room.” Over the last two and a half years, he has been refining a cultivation process that he claims has an edge over any other.

RB-26’s Gorilla Glue 4. Photo courtesy of RB-26
While many grow operations in Colorado pack hundreds of plants into open warehouses as large as 20,000 square feet, RB-26 breaks the space into several smaller grows. “It costs a lot more to segment your rooms like that, but it affords you tons of different benefits, like pest management,” he told me. “If you have contaminants or bugs in your huge room, well, I’ve seen that wipe out a huge room over night. When you segment, you might lose a 12-light room, but that’s [it].”
It’s also easier to control factors like temperature and humidity in these smaller environments. RB-26 maintains a lower overall temperature than most growers—72 to 77 degrees as opposed to high 70s or low 80s. “Heat is one of the biggest stressors of plants and as your temperature rises, you’re going to be degrading terpenes [aromatic plant compounds] and oil production, and that directly affects potency,” he said.
Keeping the grow free of contaminants is also a major factor. Before entering RB-26’s grow, you have to trade in your clothes for a sterile suit and your shoes for a pair of crocs. “Worst case scenario, you’re bringing in pollen, which could pollinate flowering plants and ruin the whole room,” he said.
RB-26 said his experimentation in this controlled setting is what led to the super high potency weed he’s now producing. Gorilla Glue is a particularly high yield strain that he managed to push to a higher THC content. “It all starts with your genetics,” he says. “There are definitely some strains that are just low testing strains. I don’t believe that every single strain can hit 30 percent.”
Related: T. Kid explores the world of butane hash oil
http://www.vice.com/video/butane-hash-oil


Others in the industry don’t buy that any strain can hit those levels.
“Anything at 33 percent THC is kind of hard to believe, physically,” said Kayvan Khalatbari, co-founder of Denver Relief, a Colorado dispensary that produced R-18, the third-strongest strain ever tested by High Times at 27.34 percent THC. Khalatbari said current testing methods are far from reliable. “These labs that are set up to test cannabis do not have access to the baseline standards that they need to test appropriately, so they use their own baselines.” As a result, testing is inconsistent across labs. Even though this one of these very tests named his strain among the strongest ever, Khalatbari disputes the accuracy. “I think they’re wonderful for marketing, and to give you an idea of cannabinoid ratio,” he said, “But to take them as gospel is incorrect.”


RB-26’s test results came from CannLabs, a Denver-based facility that has tested thousands of strains for cannabinoid content since 2010. CannLabs spokesperson William Livemore described the testing process—called liquid chromatography—to me in an email: “We measure out a quantity of the flower and use a specific solvent to pull the cannabinoids from the flower into the solvent… and measure the quantity of cannabinoids present compared against a calibration curve.” Based on CannLabs data, the average current THC content in Colorado is 15 to 17 percent, up from 10 to 15 percent in 2010. RB-26’s Gorilla Glue 4 tested at twice the average. According to Livemore, “Anytime we test a sample over that is over 30 percent TCH-A, it is tagged for retesting to make sure we have accurate measurements.” After a dozen tests, Gorilla Glue 4 remained as resinous and THC-rich as RB-26 had planned.
“I think CannLabs is about as reputable as you get in Colorado,” Khalatbari told me, “But they’re not without their flaws. [Denver Relief] sent an [R]-18 sample to them not long ago that tested at 13 percent, and that same sample tested at over 20 percent in another one we sent them.”

Despite consistently high marks, the flaws of the testing process forced me to rely on the traditional method of testing THC potency in a marijuana strain: I smoked it. With a sample of Gorilla Glue 4 from RB-26’s personal stash, I rolled a joint and got high with Danny Danko, cultivation editor of High Times, at the Denver Cannabis Cup.
Danko said of Gorilla Glue, “It’s one of the strongest strains we’ve tested here at High Times, consistently testing over 25 percent THC and higher.” Before we lit up, he took a look at the buds. “It’s just super-duper frosty, covered completely with glandular trichomes and you can just tell that its going to reflect in the potency levels because that’s where all the essential oil is.” After a few puffs, Danko briefly reviewed its flavor profile, “Just from the taste of it you can tell how potent it is. It’s just very thick smoke. It’s similar in some ways to OG and Sour Diesel, but a little bit fruitier. It has that fuel flavor and some sweetness to it. One of those hybrids of the last five years that have really been changing the strain game.”
Whether or not it’s breaking any records, RB-26’s Gorilla Glue is at the stronger end of an already powerful strain. His buds could easily compete against Cannabis Cup entries, and likely will when he enters them at the next event in San Francisco. As for hitting the 33 percent THC mark, Khalatbari questions the importance of that measurement altogether. “What really is the difference between 33 percent and 28 percent on the effect that its providing you with? That’s like saying there’s a big difference between 55 proof alcohol and 60 proof alcohol. With THC, once you get into the upper 20s, it’s all the same thing.”
Follow T. Kid on Twitter.
Follow RB-26 on Instagram and read his weed blog, Culti-vated. 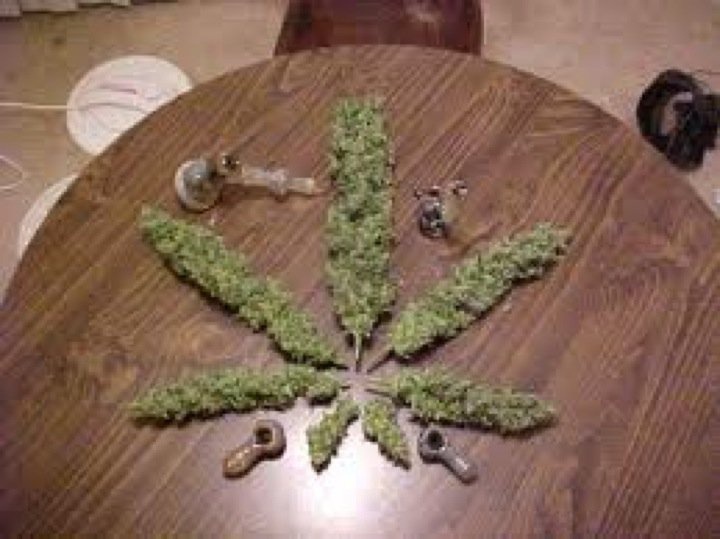 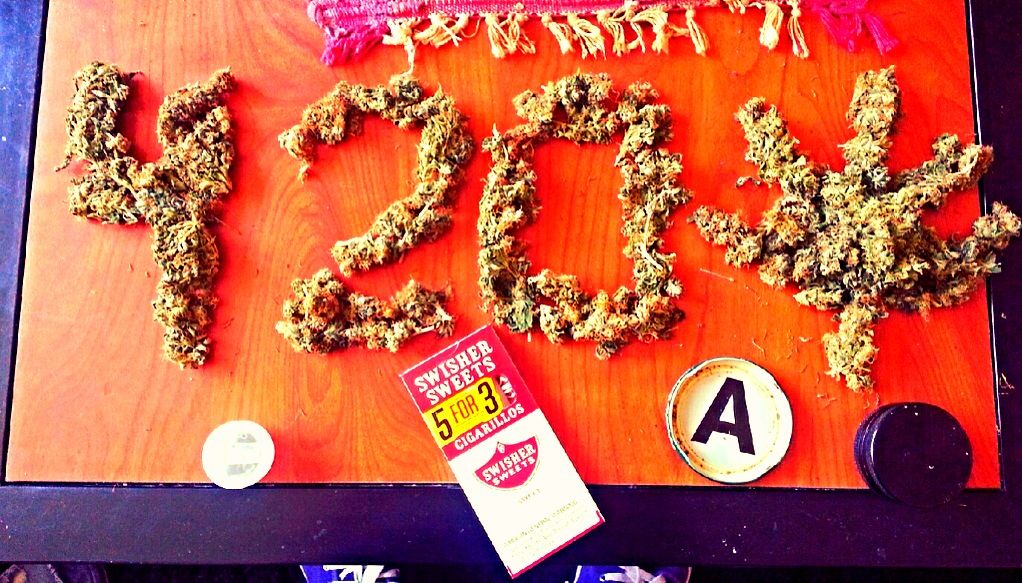 Most of us understand the meaning behind Christmas and MLK day, but for marijuana users today is a holy day and nobody is quite sure of its history. Does any one know what the meaning of 420 is?
The origins of 420 are kind of a mystery and the internet can sometimes provide too much information.

The term 420 originated at San Rafael High School, in 1971, among a group of about a dozen pot-smoking wiseacres who called themselves the Waldos, who are now pushing 50. The term was shorthand for the time of day the group would meet, at the campus statue of Louis Pasteur, to smoke pot. Intent on developing their own discreet language, they made 420 code for a time to get high, and its use spread among members of an entire generation.

It was Christmas week in Oakland, 1990. Steven Bloom was wandering through The Lot – that timeless gathering of hippies that springs up in the parking lot before every Grateful Dead concert – when a Deadhead handed him a yellow flyer.
“We are going to meet at 4:20 on 4/20 for 420-ing in Marin County at the Bolinas Ridge sunset spot on Mt. Tamalpais,” reads the message, which Bloom dug up and forwarded to the Huffington Post. Bloom, then a reporter for High Times magazine and now the publisher of CelebStoner.com and co-author of Pot Culture, had never heard of “420-ing” before.
The flyer came complete with a 420 back story: “420 started somewhere in San Rafael, California in the late ’70s. It started as the police code for Marijuana Smoking in Progress. After local heads heard of the police call, they started using the expression 420 when referring to herb – Let’s Go 420, dude!”

Some state that 420 is an actual police call for Marijuana Smoking in Progress.