Weird UFO caught on video over Virginia Beach Town Center
Posted by: Alejandro Rojas April 22, 2015 1 Comment 2,159 Views
A YouTuber leaving her job at the Town Center of Virginia Beach spotted a weird object fluttering around the top of the nearby Westin Hotel building. The object sat motionless at times, and occasionally sped off and came back. The witness was left wondering what the heck she had seen. Luckily, she caught it on video. 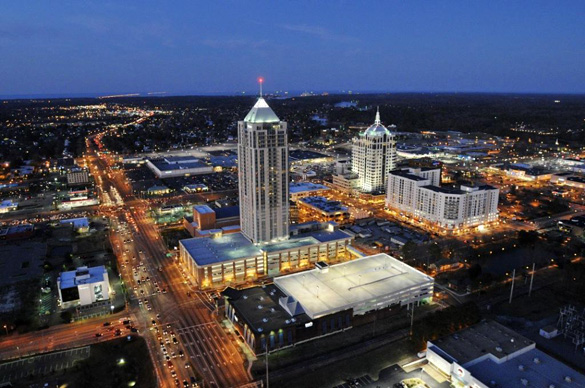 Picture of the Virginia Beach Town Center at night. The Westin Hotel building can been seen in the center. It is the largest building in Virginia. (Credit: UniqueHomes.com)
I was tipped off to this video (seen above) by John Greenewald, who posted it on his website TheBlackVault.com. He felt the video was “kind of interesting,” and I agree. It immediately reminded me of a similar video that witnesses had given me a few years back of a strange object flying around the New York-New York Hotel and Casino on the Las Vegas strip.
The Virginia Beach video was posted on April 18, 2015 by YouTuber Mandy AMF. The sighting allegedly took place on the same day.
In the video, an object can be seen hovering over the Westin’s large, brightly lit, pyramid roof and spire. At first it doesn’t look too abnormal, but then the object begins to maneuver in strange ways. It zooms off and comes back a couple of times before zooming off one last time at the end of the video. The video last about 3 and a half minutes. 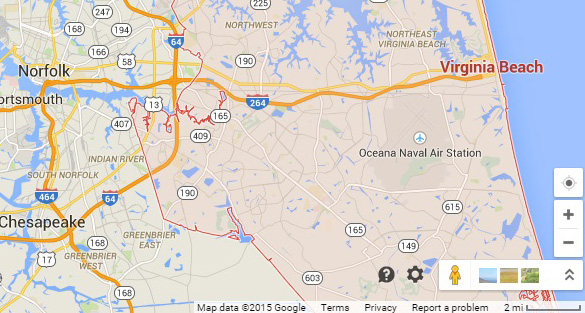 Map showing the location of Virginia Beach. (Credit: Google Maps)
In the description, Mandy AMF says she spotted the object at about 12 am. In the comments, she says she works at the Town Center and spotted it when she was leaving work.
People have left comments suggesting that the UFO might be a bird, a drone, or a hoax.
As for the latter, Mandy AMF says, ” Wow! Lol, definetly [sic] not a hoax.”
” I was not alone while I was filming this, and I have heard from people online who saw it, too [sic],” she adds. 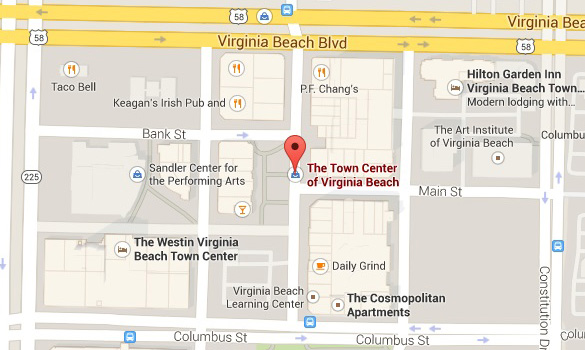 Map of the Town Center of Virginia Beach. (Credit: Google Maps)
There are none of the tell-tale signs that this video is a hoax. The YouTube account has been active since August, 2011, and other videos on the account appear to be typical family videos. Well, the humor displayed by the kids in the video may be above typical, actually.
The video, to me, does not appear to be CGI either. So, at least I am convinced it is not a hoax.
What the UFO may actually be is another question. The object does not appear to be self-luminescent. It looks like the object is reflecting the bright lights of the pyramid at the top of the building. Often birds are attracted to these lights. However, this object hovers for a long time before zooming off and coming back. It seems like behavior that would be abnormal for a bird.
Still, one YouTuber commented, ” Looks like a bird probably a falcon [sic], the bright light from the top of the building is reflecting off the bird. If you look close you can make out the wings flapping.”
I cannot make out any flapping. Perhaps you can, if so, let us know below. 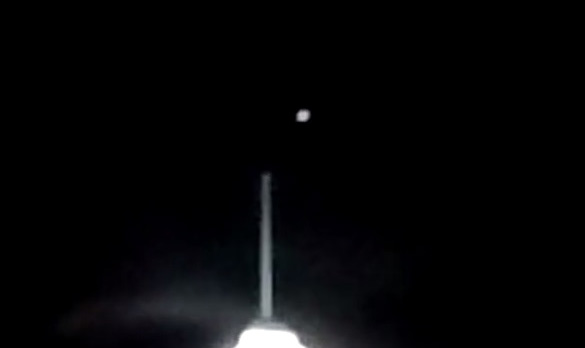 Close-up of the strange object caught on video over the Westin Virginia Beach Town Center. (Credit: YouTube/Mandy AMF)
If this is not a bird, it is possible that it is a drone. However, if it is, it does not appear to have lights on it. When it leaves the lights of the building, it cannot be seen.  Without lights it would be hard to track a drone, especially one flying so high.
According to the Council on Tall Buildings and Urban Habitat, the building is 508 feet tall, and is the tallest building in Virginia. This is not an impossible height for a drone, but still, very high, especially without lights.
One YouTuber put a link to Aerial Virginia in her comment, apparently suggesting that the object could be one of their drones. When visiting the Aerial Virginia website, it appears they do fly drones around to capture dramatic video of the area, including the Town Center area. Could it be one of their drones?
I have sent them an email, but as of the writing of this story, I have not received a reply. I will let you know if I do.
What struck me about the video is how similar it is to a video I was given many years ago of a UFO over the Las Vegas strip near the New York-New York Hotel and Casino. I have posted it on YouTube and you can see it below.


This video was captured in 2008, I could not remember the exact date, and I lost contact with the witnesses. A couple and one of their relatives talked to me about the sighting after I had given a lecture. They said they had seen a UFO on a recent trip to Las Vegas, and they gave me a copy of the video they captured to examine, and allowed me to post it.
In 2008, Chinese Lanterns were not as common, and neither were drones. Like the Virginia video, the object seems to randomly meander and make sudden quick movements.
It has been suggested that the UFO in Las Vegas is actually a bag floating around in the wind. That could be possible of this Virginia video as well, however, in both videos, the object seems to hover for quite a long time. Also, in both videos, the movement seems to be deliberate.
Either way, I think they are both interesting videos. Let us know what you think they might be below.