Today at 4:30 pm by PurpleSkyz

Today at 4:25 pm by PurpleSkyz

Today at 4:22 pm by PurpleSkyz

Today at 2:32 pm by PurpleSkyz

Today at 2:30 pm by PurpleSkyz

Today at 2:28 pm by PurpleSkyz

Today at 2:15 pm by PurpleSkyz

Today at 2:11 pm by PurpleSkyz

Today at 1:43 pm by Consciousness Of Economic

Today at 1:42 pm by Consciousness Of Economic

Today at 1:41 pm by Consciousness Of Economic

Today at 1:39 pm by Consciousness Of Economic

» Nothing more absurd than this can be believed

Today at 1:38 pm by Consciousness Of Economic

Today at 1:35 pm by Consciousness Of Economic

Today at 1:34 pm by Consciousness Of Economic

Today at 1:29 pm by Consciousness Of Economic

Today at 1:28 pm by Consciousness Of Economic

Today at 1:25 pm by Consciousness Of Economic

Today at 1:22 pm by Consciousness Of Economic

Freedom Comes From How You Live 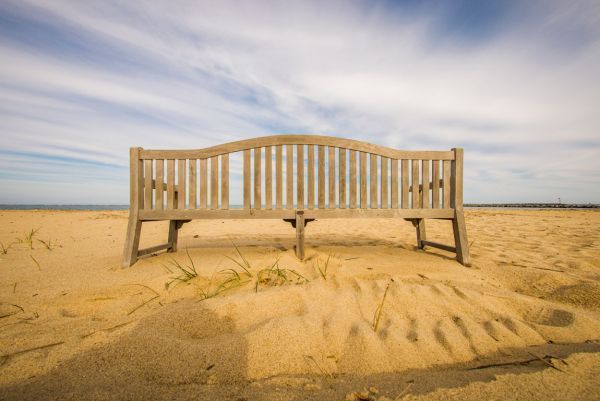 Dan Harris, best known as the host of ABC’s Nightline, began his path to happiness by having an on-air panic attack.
He was reading the national news, live, when he lost the ability to speak coherently. For 35 awful seconds, he stumbled through a segment about statin drugs for cholesterol, saying related words but making no sense. With several stories still unread, he bailed out: “…that’s all for news right now, back to Robin and Charlie.”
The incident forced him to face his mounting stress problem. He explored the many forms of self-help, and during his stint as ABC’s faith reporter (even though he was a skeptic and an atheist) he found something that worked for him: meditation. Over the next few years he used it transform his relationship to stress and his work, and still meditates daily.
But his go-getting type-A colleagues gave him a hard time for his “weird” habit, and he had trouble explaining to them what it did for him. To say it simply reduces stress was really selling it short; it does much more for a person than that. But to describe the benefits more specifically — that it allowed him to see the world the way it really is, or to see the mechanics of his bad habits, or to inquire into the nature of the self — hardly makes it sound attractive, and fails to convey its value anyway.
Eventually he came up with a stock response: “I do it because it makes me 10% happier,” although he admits this was both an understatement and an oversimplification.
Although I think his catchphrase makes meditation sound much less useful than it really is, I understand the problem he was trying to address. Meditation is still a hard sell in the Western world. It’s so unusual to us that it’s hard to make it appeal to materialistic Western sensibilities. But we all understand the value of a life with less anxiety and more happiness.
Meditation isn’t specifically about happiness, but more happiness is a likely side effect. One thing it does do, in my experience, is expand one’s freedom in a particular way, and this freedom can be used to pursue happiness and ease with much less trouble. I’ll show you what I mean.

Life is made up of experiences and nothing else. Naturally we want to have good experiences.
Even when we’re not currently experiencing a particular thing, we can have thoughts about it, and know, from those thoughts, whether that experience appeals to us. So even though you’ve (probably) never eaten a handful of ants, you can picture in your mind what that might be like, and you’ll have an involuntary reaction to that thought. Probably revulsion. The thought of fresh coffee might give you a different reaction.
At any given time, you can consider what it would be like to have any number of experiences. Often we do this when we’re not even trying. For example, receiving a letter from the IRS might cause you to involuntarily consider what it might be like to be audited, even before you know what the letter actually says.
Right now, your feelings towards possible experiences might look something like this: 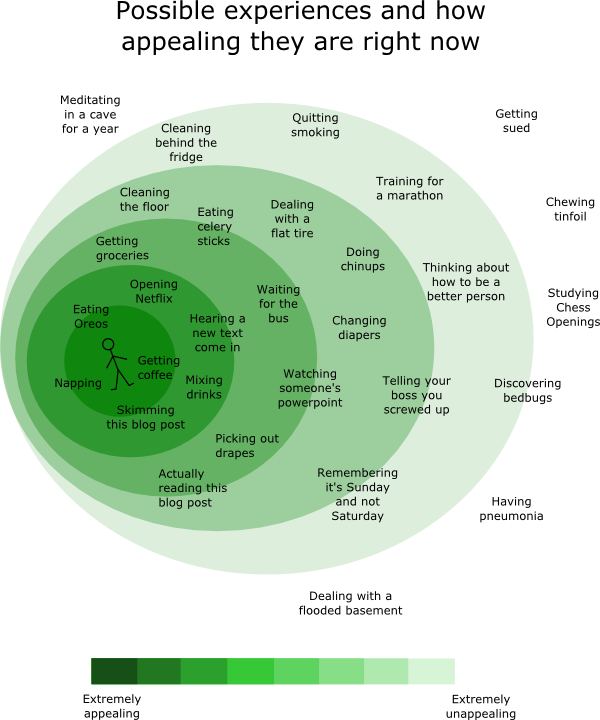 In this image, the greener a particular experience is, the more attractive it is. Some experiences happen because you choose them directly (like turning on the TV) and some just happen to you (like dealing with a leaky water heater.)
The greenness of a particular experience only represents how appealing it is at any given time. The appeal of a particular experience can change. “Eating a Chipotle burrito” might be deep forest green, until you eat one, then it becomes much paler for a while, while “Napping” has gotten greener in the mean time.
Life would be great if only we could stay in the greenest territories, because our experience would always be easy and welcoming. But this can’t happen, because:
1) You can’t always control where you are in this sea of possible experience. Sometimes you have to do your taxes, or deal with an illness, or clean behind the fridge, or wait a long time to use the bathroom.
2) Experiences lead to other experiences, enabling some possibilities and disqualifying you from others. Trying to have only appealing experiences may leave you, at some point, with few attractive options.
3) Whether a particular experience is appealing to you isn’t necessarily related to whether it’s worth experiencing. Not all experiences are choices, but quite often your best choice isn’t the most easy or appealing one.
On some level we recognize all of these things. We know that we would be better off if we could travel freely into the whiter territories whenever it made sense to. And in the times when we’re dropped involuntarily into those territories, we’d be better off if we could stay level-headed and do what’s smartest, instead of always scrambling for greener lands.
So we need to accept that life, particularly if we want a good life, requires us to spend time in all shades of experience — the whole range of pleasantness and ugliness. This reality is inescapable. Sometimes people call it “the human condition.”
There are two main responses to this reality, once you accept it.
The most common approach: 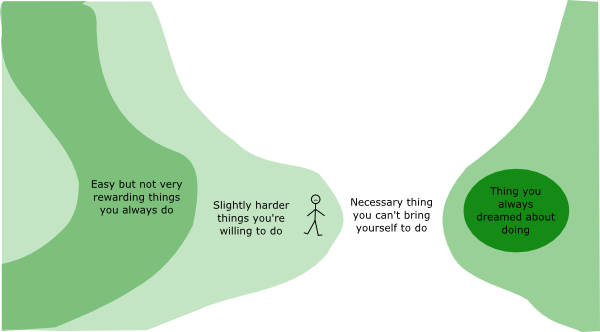 The green areas seem easy to move through, and the lighter areas seem unbearable or even impassible. This is an illusion that leads to a feeling of restricted freedom, as if vast areas of life, perhaps the areas you value most, are inaccessible to you.
The less common approach:

Although this sounds harder than the normal approach, it’s not. It’s just less familiar, because we don’t practice it. This approach creates much more ease in one’s life than the other.
This is where meditation becomes indispensable. A regular meditation practice makes the colors less relevant, and the unattractive ones less unattractive. It becomes easier to act in ways you know are good for you. It becomes clearer that avoidance and clinginess are the real sources of suffering, not the physical ease or difficulty of the experiences themselves.
How does it do that? When you’re meditating, you’re getting used to observing the moment as it is, without recoiling from what’s ugly or difficult about it. This hones all kinds of skills — patience, curiosity, non-presumptuousness, non-panic, non-judgment, non-hatred — that allow a person to stay rational and unperturbed even while things are getting tricky and uncertain. In short, it teaches you to live less of your life in survival mode, and to undermine your own interests less often.
It is possible to feel okay regardless of whether or not things are going your way. Most people can recognize how beneficial it would be to be able to bring calmness and confidence to life’s difficult moments, but they never practice it.
With some practice, the landscape becomes more like this: 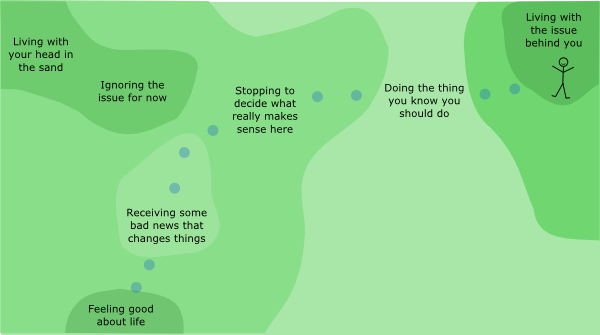 This is a simplification but you get the idea. Experience remains rich and interesting, but the jarring difference between the attractive and the unattractive softens. You’re able to move between experiences with less clinginess and fear, and stop worrying so much about which color you’ll find yourself in next. You know that at some point you must, and can, deal with them all.
Your apprehensions and desires become less like boundaries and more like signals, or advisors. You become freer to act how you feel is right, or best, for you and others. You don’t need to sacrifice as much of your freedom to appease your fear and neediness.
In real life terms, this means it becomes a conspicuously simpler matter to pick up the dumbbells when you’re feeling lazy, to broach a sensitive subject instead of avoiding it, to save instead of spend, to get up when you planned instead of lingering in bed, to show up instead of canceling. It gives you an increasing sense of freedom to leave your normal comfort zones, and to live outside the crowded, picked-over realm of the low-hanging fruit.
***
This expanded sense of freedom to do what’s best is only one of maybe a dozen major personal benefits I would ascribe to meditation practice, and I could do a post like this on each one. Like Dan Harris, I’ve always found it hard to convey these benefits without either boring people or scaring them off, but I hope I’ve managed it here.
Meditation is one of the most profoundly useful things a human being can do, but most people dismiss it as “not for them” for a variety of reasons. I believe most of this resistance is due to how it’s typically presented: difficult, weird and religious. It doesn’t need to be any of these things.
In a few weeks I’ll be releasing a short guide called Making Things Clear: A Brief Guide for People Who Think Meditation is Hard. It’s a concise, no-experience-necessary guide that spells everything out in plain and simple terms, with no spiritual mumbo-jumbo, meant for people new to meditation — or those who aren’t, but resist doing it on a regular basis for whatever reason.
I’ve started a mailing list for people who want to learn more about it. Those of you who bought You Are Here will be receiving it free, before I release it to the general public, but you may still want to get the updates. Learn more here.
***
Photo by Joe del Tufo. Graphics by David Cain.
If you liked this post, get Raptitude sent to you. (It's free.)
Email: