1 Vote
December 19, 2009
The National Reporter
The skeletal remains of what appears to be a half  human / half cat has been removed from the recently discovered hidden chamber of the great pyramid and is now on display in Cairo’s national museum.
Scientists from around the globe have been arriving in Egypt to study the strange skeleton,  many of them do not believe that it could be real.
“We know that the ancient Egyptians were accomplished taxidermist, this is most likely one of their creations they made to scare away thieves.”  Dr. Jason Hendley of Oxford university told us.

Find out more about this amazing story here.
Hidden chamber discovered in peak of great pyramid

Some of the scientists agree with Dr, Hendley while others are less sceptical.
“I find it quite perplexing that the spinal column of the creature is actually attached to the skull.”  Dr.Winston Gorjone explained. “If this was the creation of some ancient taxidermist, the attachment of the skull to the spinal column would have been obvious.  There would be wire holding the skull to the spinal column. In this case, there is not.   The bone is fused together naturally which would indicate that this skeleton may indeed be the remains of some long forgotten species of animal.” 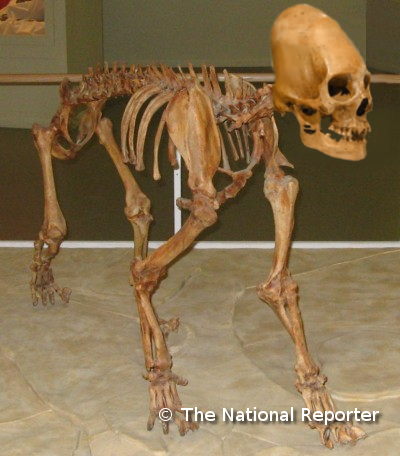 “What we must not forget is that ancient Egyptian lore is filled with half human/half animal beings.” Dr. Gorjone said. “The question that now lies before us is whether or not they were imaginary or if they really existed.

The National Reporter – What can you tell us about the mysterious floating orb that was found in the hidden chamber?
“I am not at liberty to discuss it.” Dr. Gorjone said. “For now the golden sphere is considered a state secret by the Egyptian government and we are not allowed to discuss it with anyone.”
Read more here.
© The National Reporter, 2009. Unauthorized use and/or duplication of this material without express and written permission from this blog’s author and/or owner is strictly prohibited. Excerpts and links may be used, provided that full and clear credit is given to The National Reporter with appropriate and specific direction to the original content.
https://aceflashman.wordpress.com/2009/12/19/skeletal-remains-of-half-cat-half-human-now-on-display-in-cairo-museum/