OUT OF MIND » VOICES CARRY » HOW TO BEAT THE SYSTEM » A Fraudulent Congress Attempts to deceive the people in Broad Daylight!

A Fraudulent Congress Attempts to deceive the people in Broad Daylight! Fri May 08, 2015 6:18 pm

Expressing the opinions of an old man who knows nothing…

Is it not surprising?

How is it the pretend Congress suddenly gains its Conscience?  I don’t think so…
Just more theatrics!
The Congress, all members of the board of the Washington, D.C. bankrupt corporation controlled by the British Crown, are playing the American people for big suckers. US Corp (of which obama is CEO) Is In Worse Fiscal Condition Than Greece. Continental Americans not necessarily involved! They have not acted responsibly since 1862…Why the sudden pang of conscience? In preparation of the 2016 elections, these criminal impostors must make it look as if they are worthy of your vote. They will begin a major kiss-ass program to suck up to the voters.  You are urged to use your influence wisely.

At least with a whole new board of directors in place, the infection can be excised.  Will the British Crown relinquish their control?  That is up to we the people to enforce.  That begins with you personally.

It is in this period and this period only do you the voter have any influence to control the outcome of the battle that has been being waged over the last 200 years… between the forces of tyranny and the forces of liberty.

Although your vote for members of the board of a private corporation means nothing, it does provide the cover for the ongoing fraud on the people since at least 1862.

Your vote in any such election means nothing but it is used in the same theatrical manner which is as legitimate as the actual authority by which they pretend to act as the Congress. Congress has declared you as the enemy of the state.

Their action in converse creates the same status for them.  They are the enemy of the American people. In 1945, they were turned over to the United Nations as were all public servants.

In the process, they rescinded their American citizenship.  Members of Congress are all foreign agents with no loyalty to the American people.  Are you OK with that?

What you believe are state governments are actually franchises of the national franchise corporation named the  of the United States of America, Inc. 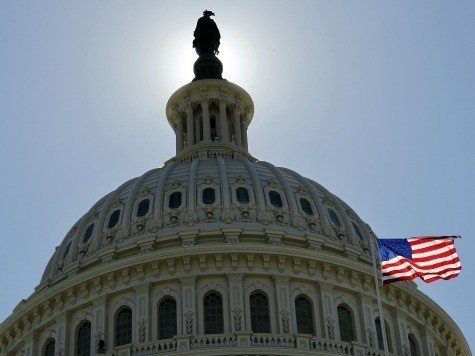 AP
by Caroline May   7 May 2015
On a near unanimous vote, the Senate approved a bill Thursday to the require that Congress review any final nuclear deal with Iran. The bipartisan “Iran Nuclear Agreement Review Act” passed on a vote of 98-1. The legislation, offered by
Sen. Bob Corker (R-TN)
and
Sen. Robert Menendez (D-NJ)
Requires the president to submit any final nuclear deal with Iran to Congress — with the potential that lawmakers could reject the agreement — before being allowed to lift any sanctions.“The Iran Nuclear Agreement Review Act offers the best chance for our constituents, through the Congress they elect, to weigh in on the White House’s negotiations with Iran,” Majority Leader
Sen. Mitch McConnell (R-KY)
said on the Senate floor Thursday before the vote. “And make no mistake, they need to have that opportunity.”
Sen. Tom Cotton (R-AR)
was the lone “no” vote and his objection was that he’d like to be voting on the Iran deal as a treaty.“A nuclear-arms agreement with any adversary—especially the terror-sponsoring, Islamist Iranian regime—should be submitted as a treaty and obtain a two-thirds majority vote in the Senate as required by the Constitution,” he said in a statement. The House will take up the legislation next. In a statement after the vote, House Speaker
Rep. John Boehner (R-OH)
said the bill would “hold President Obama’s administration accountable.”“This important, bipartisan legislation will ensure that Congress has a role in reviewing any potential agreement regarding Iran’s nuclear weapons program,” he said. “Our goal is to stop a bad agreement that could pave the way to a nuclear-armed Iran, set off a regional nuclear arms race, and strengthen and legitimize the government of Iran – which threatens Israel and other allies in the region, as well as supports terrorism throughout the Middle East.”

OUT OF MIND » VOICES CARRY » HOW TO BEAT THE SYSTEM » A Fraudulent Congress Attempts to deceive the people in Broad Daylight!