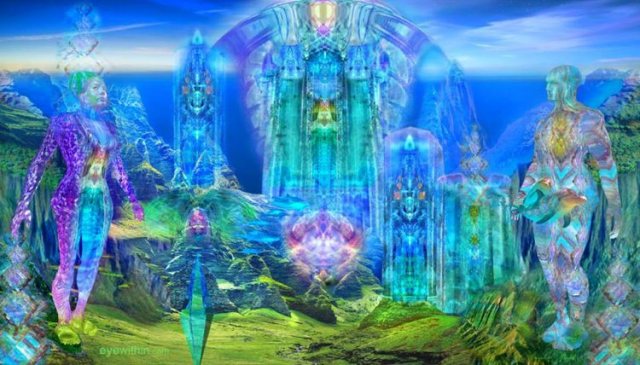 by Gregg Prescott, M.S.
Editor, In5D.com
We are living in exciting times where soon, we may be transitioning in to 5d Earth.  So what might this transition be like?  Ideally, the transition to 5d earth will happen overnight but in the event that it doesn’t, here are some possible scenarios.
As more people awaken to the tyranny and oppression of all governments, change is being reflected in the form of global protests.  It has become quite obvious that the overall population is not content with a system that supports the banksters while keeping the rest of the population in economic slavery.

With the new energies of the Age of Aquarius, change is inevitable.  In order for any dramatic change to occur, there needs to be a complete reformation of the following Big 4 systems: government, money, education and religion. Realistically, this will not occur overnight and will take some time, but the current trend indicates that this is already happening, as evidenced by global protests against governments, financial collapse of virtually all nations, the demand for quality education and the exposure of the corruption within religious denominations.


We need to remember that these changes are going to be the foundation for all of mankind in the future and that it will probably not happen overnight. While we are witnessing the collapse of government, money, education and religion, none of these will go quietly. After all, each area has kept us suppressed for so long that those leaders sole focus will be to maintain their power for as long as possible.


The Powers That Be Will Be No More

Fortunately for us, the divine plan is already in motion and is gaining momentum. Those in power will frantically try to cling on to their illusion of power, greed and corruption but will not be able to maintain their grip over humanity for much longer.  While we can still expect a few more false flag attempts, they will only help to expose the people who instigated them.
The transition will begin with a new alignment of infrastructure that is dedicated to the betterment of humanity as we become a Type 1 civilization.  This will begin with the replacing of all governments with councils of elders who will be immediately removed from their position the minute they stop working in humanity’s best interest.  No more 4 year terms and idle promises of hope and change.  Change will be immediate and will always involve improving the quality of life for everyone.


It’s All Collapsing And That Is A GOOD Thing!

In the next few years, I can foresee a collapse of the Roman Catholic Church, with their net worth being distributed to the global population as payment for their corruption and tyranny against the world through unsanctioned wars and financial greed, as well as retribution for their immoral acts against humanity, such as their involvement with pedophilia, which always gets brushed under the table with no repercussions.
Also see: Pluto In Capricorn’s Huge Changes Are Upon Us!
This would provide abundance for everyone in terms of monetary value.  While money will not be needed in the Golden Age, it will help everyone transition into the new age.

Also look for absolute forgiveness of all debt, as all debt was initially created by the banksters, who create money out of thin air through fractional reserves.  In other words, if I was the bank and there was only $100 in existence and I lent you that $100, I would expect you to pay me back $110.  Where does that $10 come from if it never existed?  This is the Ponzi scheme that has been instituted for centuries by the banksters and it will come to an end.


What Can We Expect?

As more truths are revealed, our educational system will need to reflect the true history of our existence.  All history books will need to be rewritten to reflect these truths, as each one is currently used as propaganda to support any given country’s view on the history of any given event.
Related: 20 History Questions They Refuse To Answer In School!
The main stream media will be unrecognizable from what it is today.  Imagine any given TV station after the cabal goes down and is replaced with people who work for the best interests of humanity?  How cool would it be to have David Icke and/or Graham Hancock as reporters/anchormen on the 6 o’clock news? Imagine watching QUALITY television with commercials that help to benefit humanity? This is where we’re heading.
We will still have jobs, but they will all help to improve the quality of life for everyone.  In time, most jobs will be automated by machinery as explained by the Venus Project.  In place of money, we might switch over to an energy system where everyone is paid equally, no matter what level of education you have or what credentials you possess.  The goal is to eventually get rid of the money system, because as we have seen, the accumulation of money brings corruption and greed and neither will be tolerated in 5d Earth.


If There Was No Such Thing As Money

One question I like to ask people is this:  If there was no such thing as money, then what would you be doing withyour life?  Having fun isn’t a good enough answer, because we’ll all have fun.  Eventually, you will want to contribute to society, so what will you do?  I can see myself having a farm where I would grow fruit and would be able to feed others with it, or possibly use it in trade or barter.  I would also be a spiritual counselor to help people find their true, divine reason for being here.
While those who are caught in the matrix will view this article with disregard, it is becoming reality every day.  The ideas are already in place.  The thoughts are in motion.  The Big 4 are all collapsing as the universe will not allow anything of negative vibration to coexist in the Golden Age on 5d Earth.  It is Divine Law and nothing can stop it.

Past life regression hypnotherapist, Dolores Cannon, stated that there will be people who get left behind in this transition and will remain on a 3d vibrational reality.  According to Cannon, they will get left behind if they are “still into the negativity”, yet Cannon added that you only need to be at least 51% positive to make the shift.  Cannon additionally stated those who get left behind will “be left with what they created.  They’ll stay there.  They’ll work out their karma there.  They won’t move into the new Earth.”
Related: 51 Percent
Cannon’s message resonates with information from the Law of One, which also states that one needs to be at least 51% “orientation towards service to others” to be part of the ‘harvest’.
According to Ra, you do not need to understand the Law of One or have an esoteric or metaphysical knowledge in order to ascend.

It is unknown whether a 5th dimensional reality will ultimately bring us out of this matrix or not but with an increase of abilities will come an increase in knowledge. It’s quite possible that the matrix is only on our 3rd dimensional reality and is what many call the quarantine over our planet.
If there still is a hierarchy in 5D, there will be those of us who will be questioning it while others simply enjoy their new lifestyle.
If the matrix does not exist in the 5th dimension, then there still will be challenges to help our spiritual progression as we move closer to Source, but these will not be anything like what we’re experiencing in the 3rd dimension. Money, war, government, and religion are elements that prevent us from being a Type 1 Civilization. As these all collapse, they will allow us to rebuild this planet in humanity’s best interests while we’re still in the 3rd dimension.
Also keep in mind that what you see in the 3rd dimension may not be the same exact thing you see in the 5th dimension. For example, what you see as a 3rd dimensional building may be open land in the 5th dimension as it vibrates at a higher frequency.

With the increase in UFO sightings, it has become apparent that our galactic neighbors are gathering to welcome us to our next level of spiritual evolution.  We may even receive help from our galactic friends on the rebuilding of infrastructures well as being introduced to new technologies.
We are the light that is at the end of the tunnel. It’s time for graduation.
Are you ready to go home to 5d Earth?
This work by In5D is licensed under a Creative Commons Attribution-NonCommercial 3.0 Unported
Source:
http://in5d.com/transitioning-into-5d-earth/