GLOBAL ECONOMIC MELTDOWN: Precursors To A Global Financial Collapse - HSBC Warns That The World Economy Faces A "TITANIC PROBLEM" As The Day Of Reckoning Draws Near For The Federal Reserve! 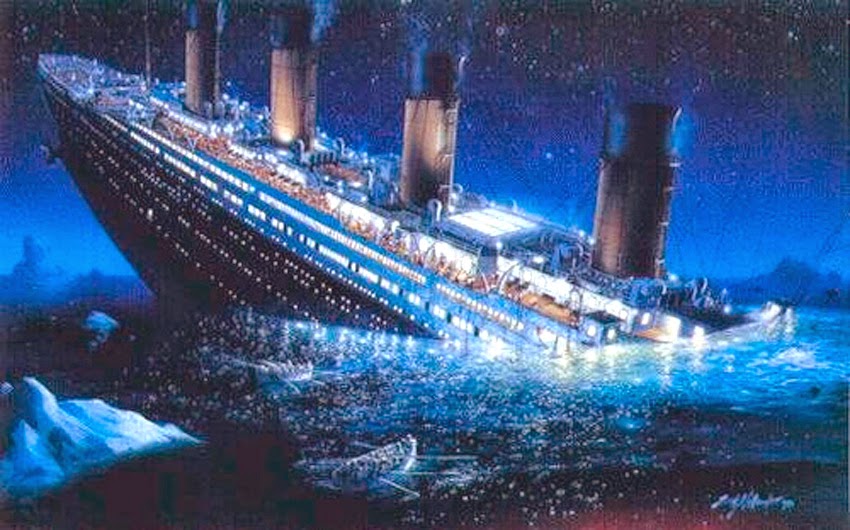 May 13, 2015 - GLOBAL ECONOMY -  HSBC chief economist Stephen King is already thinking about the next recession.

In a note to clients Wednesday, he warns: "The world economy is like an ocean liner without lifeboats. If another recession hits, it could be a truly titanic struggle for policymakers."

Here's King (emphasis added):
Whereas previous recoveries have enabled monetary and fiscal policymakers to replenish their ammunition, this recovery — both in the US and elsewhere — has been distinguished by a persistent munitions shortage. This is a major problem. In all recessions since the 1970s, the US Fed funds rate has fallen by a minimum of 5 percentage points. That kind of traditional stimulus is now completely ruled out.

King notes that this far into the recovery, there's a lack of "traditional policy ammunition." For instance, Treasury yields have not risen, the budget deficit is not falling, and welfare payments are still on the rise.

As for what might trigger the next recession, King highlighted four things:


Reckoning for the Federal Reserve
If you queried American citizens as to whether they would support a monetary experiment conducted by the Federal Reserve to stimulate economic growth — an unorthodox approach that would mostly benefit the government, large corporations and wealthy investors at first, but would ultimately help everyone else — would they approve?

And if you explained that it might take some time to deliver the desired outcome of higher employment at higher wages, and that people in the vast majority of households would have to accept much lower rates of return on their savings in the meantime, wouldn't a few perceptive respondents tilt their heads and ask: How long?So why does such a reasonable question raise such ire from former Fed Chairman Ben Bernanke? Responding to a recent editorial in The Wall Street Journal citing persistent low economic growth as perhaps an indication that the Fed's unconventional monetary policies are not working as intended, Bernanke fairly bristled with indignation, writing in his Brookings Institution blog that he never promised monetary policy would be a "panacea" for our economic troubles — and besides, "nobody claims that monetary policy can do much about productivity growth."

Such defensiveness is not reassuring. It's been nearly six years since the recession officially ended in June 2009. Still, the Fed continues to pursue its zero-interest-rate policy in the name of supporting the recovery, even as the negative aspects of this approach are imposing significant economic costs.

According to a report issued in March by Swiss Re, the world's second-largest reinsurance company, the Fed's policy of financial repression has cost U.S. savers roughly $470 billion in lost interest income. Other unintended consequences described in the report include "crowding out viable private markets" and "lowering the funds available from long-term investors to be used for the real economy."


WATCH: Reckoning for the Fed.

Bernanke's riposte to those who would question the wisdom of perpetuating zero rates is to assert that the inflationary consequences predicted by some have not materialized. But after so much pumping, subdued inflation is hardly grounds for crowing; it's further proof that the Fed's policies are not working. Cheap money is not expanding production and raising wages as planned, it's not increasing demand — and thus not raising prices for goods and services. Inflation is the dog that's not barking.

Something is wrong. The monetary stimulus theory behind zero interest rates is not playing out in reality. Where's the economic growth? This mystery will not be solved by former Fed prima donnas refusing to acknowledge that American citizens and their representatives in Congress have every right — indeed, Congress has a constitutionally mandated responsibility — to call to account those who have been appointed to the task of regulating U.S. money.

No one is accusing anyone of less-than-noble intentions or less-than-heroic efforts in utilizing central bank powers to influence economic outcomes. But when monetary authorities themselves are repeatedly stymied by less-than-optimal results, it's time to consider changing course. An accountable Fed would accept the notion that its monetary stimulus strategy needs to be examined because it has not delivered anticipated results, by the Fed's own projections, within a reasonable time period.

Maybe the problem stems from the Fed's enhanced regulatory scrutiny over banks' lending decisions in the wake of the crisis. Overregulation may have had an especially inhibiting effect on community banks. Before the Dodd-Frank bank regulation law passed in 2010, an average of more than 100 new banks opened each year; in the five years since 2010, only one new bank has opened. Fear of violating regulations has caused many hometown banks to reject loan applications from traditional customers — with the result that small business lending has been dampened. And that factor alone is a blow to economic growth.

Then, too, the normal money multiplier has not been functioning properly due to banks' massive buildup of excess reserves, which have gone from $1.9 billion in August 2008 to a staggering $2.6 trillion currently. A study issued by the Cleveland Fed in February states that banks now find it "both easier and more attractive" to hold excess reserves than make loans. Why? Fed policies have altered the terms of the trade-off; the marginal benefit of holding reserves has increased because the Fed now pays interest on them, while the marginal cost in terms of forgone interest on loans has decreased under the low-rate conditions engineered by the same Fed.

So in crafting its monetary strategy to stimulate economic growth, it seems the Fed has given short shrift to the middle-income Americans who fuel the private sector — the true engine of productive economic growth. How much has consumer demand decreased because personal savings accounts pay zilch? How much has employment and production suffered because entrepreneurs can't get loans from their local banks?

Yet, even as business investment languishes and manufacturing has hit the skids, and with America's annual growth rate coming to a near halt at 0.2 percent for this year's first quarter, our monetary authorities seem clueless about the impact of their own policies. Indeed, the Fed's instinctive position is to call for more government intervention in the economy. Don't expect any initiatives to scale back regulatory burdens or liberate market forces to spur real economic growth.

Instead, you can expect increasing calls from Fed officials to give themselves more room to maneuver by raising their target rate of inflation to 4 percent or higher — never mind that such monetary mischief utterly confounds business planning and leads to the misallocation of investment resources. And you can expect further demands for massive government spending on "public infrastructure development" to create jobs. It's what Bernanke recommends in his blog post, insinuating that some other part of government needs to join the Fed's stimulus party to attain economic growth.

But shouldn't we start by figuring out the reasons for the Fed's own lack of success? - The Hill.

Posts : 1826
Join date : 2012-02-15
Age : 66
Location : Ct
One would think that they are grasping at straws. I can assure you that they have a plan and the implementation is underway. We as a country have been "put out to pasture". China is now in charge and its all a well thought out plan. Our unemployment rate is over 20% and those on it get 6 months to find a job.....The only jobs for most wont even pay the bills.....Most of our products are made in other countries and I can assure you they are being subsidized to create the economic collapse of our country. The Federal Reserve is moving to a new name and will start this whole bankruptcy ride for another 80 years.....So where do we go.......We can run be we cannot hide. A friend of mine just got back from Peru and said they had signs on many businesses saying"US money not accepted here"...Its time for all of us to do something to make a difference....Start filing suits against your towns for fraud. THEY ARE CORPORATIONS NOT TOWNS,THEY ARE FOR PROFIT ORGANIZATIONS. THE BUDGETS ARE A HOAX.....file suits against your senators for fraud for allowing this chemtrail fiasco...GET OUT AND DO SOMETHING...AND NOW!!!!!!!!!!!!!!!!!!!!!!!!!!!!!!!! If we dont get involved, we are the ones to blame.....