CERN And Saturn – The Smoking Gun

CERN And Saturn – The Smoking Gun

If this does not clearly illustrate the connection between CERN and Saturn nothing else will. CERN was “reactivated” according to the celestial movement of the planet Saturn. In fact, I believe CERN was waiting to be restarted until Saturn would be closer and aligned with the earth and sun! When studying wormholes you will see two points established and then time/space is bent to make the journey instantaneous. For a planetary target it would be wise to wait until it is closest to the earth, right?
This is a great compilation on CERN and it will make you think!
I believe CERN’s phantom application is to connect to a target and create a window (wormhole) between targets. In this case, it will be the planet Saturn. Why these satanist are so transparent to well researched truth seekers is beyond me! Just by placing the Shiva statue in front of CERN is another connection to Saturn.
This is why I believe the rebellious angels are there and they obviously need help from mankind to “ease on down the road.” Shiva is directly affiliated with the planet Saturn! CERN was really designed to interface with the planet Saturn. This is an ancient plan which the ancient order patiently waited for technology to bring the ancient plan to reality.

In Vedic myth, it’s heralded as the annual moment when the lord of destruction, Shiva, descends to the earth for evolutionary and transformative human gain. In Vedic astrology, it’s a time when the planets, most notably Saturn (and all the planets under its influence), transit potent constellations that are said to elevate consciousness.

What a CERN to Saturn bridge might look like?
We might see a greater transition into sexual exploration and we are already seeing reports of “animal brothels” in the United Kingdom. This is something to keep our eyes on after CERN operations have been reviewed. We cannot discount the plausibility of Saturn energy being a variable and catalyst for transformation of the people of earth. Read the quote below and see if any bells or whistles go off when you are done!

This optimal positioning occurs when Saturn is almost directly opposite the Sun in the sky. Since the Sun reaches its greatest distance below the horizon at midnight, the point opposite to it is highest in the sky at the same time.
At around the same time that Saturn passes opposition, it also makes its closest approach to the Earth – termed its perigee – making it appear at its brightest and largest.
This happens because when Saturn lies opposite the Sun in the sky, the solar system is lined up so that Saturn, the Earth and the Sun form a straight line with the Earth in the middle, on the same side of the Sun as Saturn. May 22, 2015, Saturn will be at its closest point to earth (READ MORE)

Every wormhole drawing you have ever seen are two points lined up and then folded to touch. There are obvious celestial mechanics included as variables into the equation. When it comes down to it, CERN is manipulating energy in harmonics with celestial objects like Saturn and the Sun. In essence, the correct “chord” or “key” must resonate at the Saturnian frequency for the bridge to form in sequence with the other variables.


MUST SEE: Great research and insight into CERN and Biblical connections!
This is why they waited on Saturn to not just be at its closest point to the earth but in line with the earth AND the sun! Now that is some fallen angel shiitake for you! Yes folks, CERN is more than some international nerds getting together to smash particles together. With all of the Saturn connections you should understand Saturn IS the target! 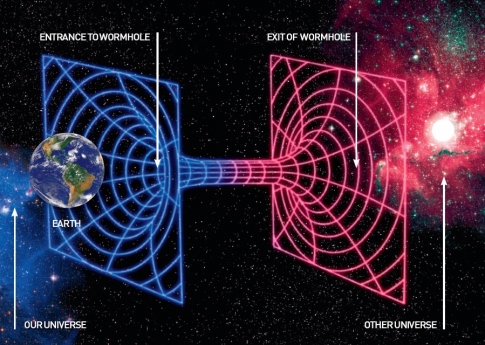 What can we expect now that CERN is interfacing with Saturn? We should see traceable global behavior changes and/or increased spiritual activity. There should not be any immediate new faces on the global scene or will there be? Remember the “man of perdition” has yet to be revealed, meaning he is hidden until his time. How do we prepare?
Well, you should use your own discernment for that answer. We all have different roles and gifts in this spiritual war. If you are studying to show yourself approved to the Most High; answers to your questions will arrive to you. I am not quite sure what I can do to stop any of this and more importantly this is all a part of Biblical prophecy. Meaning it must unfold and all in the right time according to His Will.
What we can count on and expect from the mind of Satan is a counter measure to the prophecy of the Most High. Satan knows some of things the Most High is going to do based on prophecy and he is delusional enough to believe he is going to win. In his mind, breaking one of the Most High’s prophecy will make the Most High imperfect.

Isaiah 13:5
They come from a far country, from the end of heaven, even the LORD, and the weapons of his indignation, to destroy the whole land.

According to Isaiah 13:5, the Most High will be sending in an offensive attack descending from space. This is a powerful army and Satan knows he must match this power. Is the satanic army housed in Saturn? Did Star Wars tear a page out of Satan’s playbook with the clone army hidden away on another planet?
The Large Hadron Collider is an incredible undertaking with a massive 27 kilometer radius. That is almost 17 miles in diameter. This is an extremely powerful machine. There is always a dual purpose for technology. One is for public consumption and the other is for a private agenda. This “agenda” is private for a reason.

Is this the goal? To transport a satanic army to earth? So much to learn!
In closing, it is highly unlikely CERN restarted during the time Saturn would be closest to the earth. On May 22, 2015, Saturn will be at its closest point to the earth and the sun. If CERN is activated on this day; and after the alignment with the earth and sun, we might see evidence! There are so many Saturn references from CERN it must have been designed to interface with the planet Saturn. Since the ancient times there is a constant relationship between gods and Saturn. Please note I wrote “gods” and not God.
This is because I believe the gods can be traced back to the rebellious angels over vast epochs of time. Technology is now congruent with ancient blueprints and can be assembled to achieve ancient schemes. Now is the time to be still and pray for directions. You will not be able to hear if you are emotionally distracted. Use your own dis-cern-ment. Also, remember this is a spiritual war and we might only find spiritual evidence. Peace be with you all.
revelationnow.net
+++
ZenGardner.com