OUT OF MIND » CONSPIRACY THEORIES & ENDURING MYSTERIES » CONSPIRACY & FALSE FLAG EVENTS: PAST & PRESENT » Computer Controlled Trains, and let's review those numbers, shall we?

Computer Controlled Trains, and let's review those numbers, shall we?

Computer Controlled Trains, and let's review those numbers, shall we?

Further to the article I put out yesterday:
A Closer look at the Amtrak Train Derailment: Who and How?

Jim Stone has put together a few more pieces of this puzzle- Article below.   Computer controlled trains?

hmmmmmmm.....  Well that put's this following article into perspective a bit more, doesn't it?

By Jesse Byrnes - 05/14/15 07:03 PM EDT
The Amtrak train involved in this week's deadly derailment sped up for about a minute before leaving the tracks near Pennsylvania, a member of the National Transportation Safety Board saidThursday evening.
Robert Sumwalt said footage from a camera mounted near the front of the train showed it had sped up from 70 miles per hour to more than 100 miles per hour before derailing at a curve.

The train was in a 50 mph section, The Associated Press notes, and Sumwalt said conductors have a timetable and should know the speed limits of particular sections of track.
Investigators plan to interview engineer Brandon Bostian, who also suffered injuries, in the next few days. He is allowed to bring along another individual, Sumwalt said, presumably his lawyer.

"We very much look forward to the opportunity to interview him," Sumwalt said of the engineer.

Bostian's lawyer, Robert Goggin, said earlier in the day Thursday that the man behind the controls had "no recollection" of the crash that left at least eight dead and injured more than 200.

But then there is also this piece of news that the US media seems to not really reporting on:

FBI investigates report that projectile hit windshield of Amtrak train moments before it crashed... as it's revealed TWO other trains were also struck minutes apart on the same corridor

The FBI is investigating a report that the Amtrak train that crashed in Philadelphia on Tuesday night could have been 'shot at' moments before it derailed, killing eight and injuring 200.The new claim on Friday comes as investigators revealed that two other trains had suffered cracked windows after being hit by unknown objects just minutes before the deadly crash and only a few miles apart. An assistant conductor on Amtrak Train 188 has told National Transportation Safety Board investigators she heard Amtrak engineer Brandon Bostain say that his train had been hit by something. Seconds later, the train careened off the tracks.Photos of the derailed train show a small, focused crack on the lower left part of the windshield - though it's unknown whether the damage occurred before or after the crash.
Scroll down for video 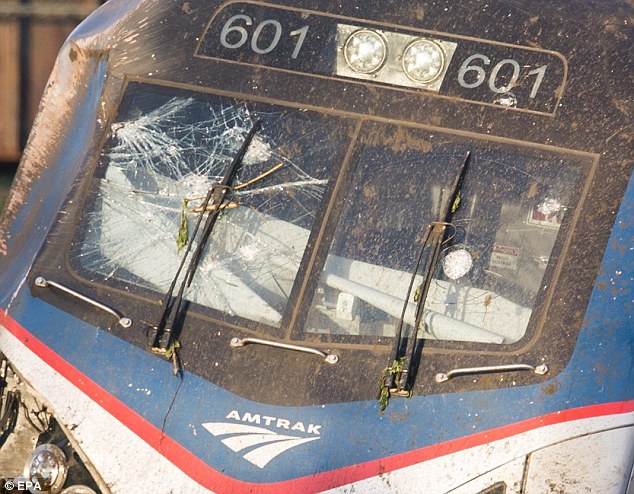 Crack: The FBI is investigating what could have caused the small, focused crack (pictured lower right) on the windshield of the derailed Amtrak train
Bostian's comment was in response to a report from a SEPTA regional rail engineer, who radioed in to say his train had been 'hit by a rock or shot at' in the area about 9.10pm Tuesday. The projectile shattered the windshield of the northbound SEPTA train.Five minutes earlier, a projectile cracked a window of a different Amtrak train - a southbound Acela Express - about 9.05pm.Train 188, which was headed north from Philadelphia to New York, derailed at 9.21pm. All of the reported hits came within just a few miles of Philadelphia's 30th Street Station. SEPTA, Southeast Pennsylvania Transportation Authority, said there's no indication the object that hit the commuter rail train is related to the Amtrak derailment.


Oh noooooooo..... the incidents have NOTHING in common, and I'm sure they're not related in any way at all.    No really!

And finally, I would like to point everyone's attention to the wikipedia listing of train accidents for 2015 so far.... please note my highlights....

Now, before anyone says anything about how busy the US rail system is, or how many trains run through the US daily.....  I have traveled extensively through Asia and Europe, and I can tell you that North America ain't got nothin on India or Europe.  Just to give a quick example:

And yet...... look at the number of US Train crashes compared to the number of train crashes in India? And look at Canada.  Do you really think that India's Railway lines are in better condition than the US'?  Not to mention the ages of the trains?  The Amtrak train that crashed outside of Philadelphia was less than a year old.....

[size=30]3 JP Morgan Bankers, a Pharmaceutical Scientist, and an Art Curator Walk onto a Train....[/size]


UPDATE: STUXNET WAS DEFINITELY USED TO CRASH THE TRAIN, IT IS TOTALLY PROVEN.

FACT 1: The section of track the train crashed on was a speed restricted section, which means the computer takes over during that section and won't let the conductor go faster than the set limit (in this case 50 mph) even if he wants to. CONCLUSION: The conductor did not cause this

FACT 2: The conductor unexpectedly survived, and said the speed readouts on the train showed 50 mph up until he blacked out. Yet investigators have proven the train was doing 107 mph when it crashed. CONCLUSION: Something was amiss in the electronic controls that provide the readouts.

FACT 3: Survivors on the train said it was riding as smooth as glass up until the crash. CONCLUSION: The tracks were in excellent condition, SO GOOD that they did not have enough bumps and shakes to let anyone know the train was way over speed. This would have hid an impending crash reality from the conductor.

FACT 4: The crash happened at night, which also would have concealed the speed of the train from the conductor. CONCLUSION: He probably just looked at the readouts and believed them, not realizing anything was amiss at all until he woke up after blacking out. At 107 mph, he probably bounced off the interior of the engine and blacked out less than a quarter of a second after the train left the tracks, far too short of a time to realize anything happened at all.

FACT 5: The engine was brand spanking new, far less than a year old. CONCLUSION: It had all the nice new modern perfectly programmed to allow hacking computerized controls on it, and ADDITIONALLY, was new enough so the conductor may not have been fully acquainted with every last sound the motors made, and on top of that, the motors were probably extremely quiet which would also conceal the fact that the train was going way too fast.

FACT 6, AND HERE IS THE CLINCHER THAT PROVES IT WAS STUXNET OR A STUXNET VARIANT: The control readouts all indicated a low speed at a time when the train was doing over 100. What industrial virus keeps control readouts normal while it destroys a facility and everything goes kablooey?

ANSWER: STUXNET, and ONLY STUXNET. This is how Israel wrecked many of Iran's nuclear centrifuges, Stuxnet spun them too fast all the while the readouts said the speed was normal, JUST LIKE THIS TRAIN, there is no difference between a centrifuge motor speed readout and a speedometer, the zio clan is totally hosed with this one, THEY CRASHED THIS TRAIN AND THERE IS NO WAY OUT OF IT. Now the big question is,Since this train operates in America's main political corridor, WHO was on that train the zio clan wanted killed? Stuxnet Amtrak crash in Philadelphia involving train heavily used by politicians Am Amtrak train went off the tracks while going 106 miles an hour in the immediate approach to a 50 mph curve. Early reports said there was a huge explosion before derailment but I do not know what to make of them because people on the train have not said anything about an explosion. It looks like a scrap yard, not a train wreck and only 6 people died? YEAH RIGHT!

This was probably caused by a zio clan hack The trains are computer controlled with the conductor in a supervisory position, and that leaves serious room for questioning how one hit a 50 mph curve at 106 mph when it should have slowed down for it automatically, AND this happened right after it left a station, which means if there was a curve that close it should not have sped up at all. The whitewash is on now, And guess what? Another computer controlled subway train in Mexico City came into a station yesterday and rear ended another train at full speed. They explained it away as communication glitches and wet tracks but what a coincidence! The subway trains were amazingly shredded (like I never thought that could ever happen) and I suspected the zio clan played a game even before this latest Amtrak crash. The Amtrak crash happened so soon after the train left the station that tickets had not been collected yet.
One man said "We were rolling along nice and smooth and then all of a sudden we were on our side" Which is exactly what would happen if all the train did was accelerate to a point of doom. Try a 50 mph turn at 106. If you are asleep in the back seat (the perspective of all passengers) you will be going along nice and smooth and just "suddenly" (fill in the blank) There are other reports, such as it wobbled and went off the tracks, the brakes were hit and it went off the tracks, but this is what would be felt in the back of the train as the front flew off the tracks. Most likely the man who said it was all smooth and then the car was on its side was probably near the front. 106 is not fast for this particular train, which travels at up to 150 mph. The problem was that it hit a 50 mph curve at 106. If this was not a threat and was instead an actual assassination attempt, it seems it probably failed. One car got the brunt of the action and was mangled beyond belief but 5 were in fairly good condition afterwards.
Not bad for 106 mph. It could have been worse. I am going to stick with the original statements because we all know what happens with the white wash. BUT I WILL SAY THIS: Think back to the time frame prior to 6 or 7 years ago. Most of the the bad train accidents happened 100 years ago, then going into the 1960's they were practically unheard of. By the time we got to the 1990's it all became so safe that problems such as trains on the wrong track and trains going the wrong speed were nonexistent, it never happened because UN HACKED computers controlled it all. Why now, after the illustrious Stuxnet was invented have we returned to a train accident frequency similar to what happened in the 1800's? GOOD QUESTION.


Posted by D ... Breaking The Silence at 21:49
Email ThisBlogThis!Share to TwitterShare to FacebookShare to Pinterest

OUT OF MIND » CONSPIRACY THEORIES & ENDURING MYSTERIES » CONSPIRACY & FALSE FLAG EVENTS: PAST & PRESENT » Computer Controlled Trains, and let's review those numbers, shall we?