OUT OF MIND » THE INSANITY OF REALITY » GOVERNMENTS & THE NEW WORLD ORDER » It’s Official, Alternative Media Win Over MSM

It’s been a while that alternative media has been fighting for this. Finally, it’s here, it’s official. Mainstream media is history.
Nobody wants to listen and watch it anymore, except for the deeply brainwashed individuals which are depleting by the day.

US Citizens Fed Up With Mainstream Media Lies About Iraq, Iran
People in the United States are fed up with mainstream media coverage of events in Iraq and Iran, CODEPINK activist organization national coordinator Alli McCracken, told Sputnik on Tuesday.
MOSCOW (Sputnik), Alexander Mosesov — McCracken’s comments come following the release of an ICM Research poll conducted exclusively for Sputnik, revealing that a total of 60 percent of European and US citizens surveyed wanted to receive information on global events from alternative news sources.
“I think people are really fed up with mainstream media, especially after over a decade of being fed lies about Iraq, now more lies are being told about Iran.”
Western mainstream media coverage of the developments in Iraq gave rise to doubt from the beginning of the US military invasion in 2003. High-profile television channels were faulted for copycat reproduction of primary government talking points, including allegations of Iraq possessing weapons of mass destruction and the use of state-sponsored foreign agents for local information.
US news outlets have come under fire for their coverage of Iran. In 2013, experts at the Center for International and Security Studies at the University of Maryland released a report suggesting that influential US and UK newspapers created inaccurate impressions of Iran’s nuclear activity by using “very vague and inconsistent terminology” and avoiding reputable local information sources. 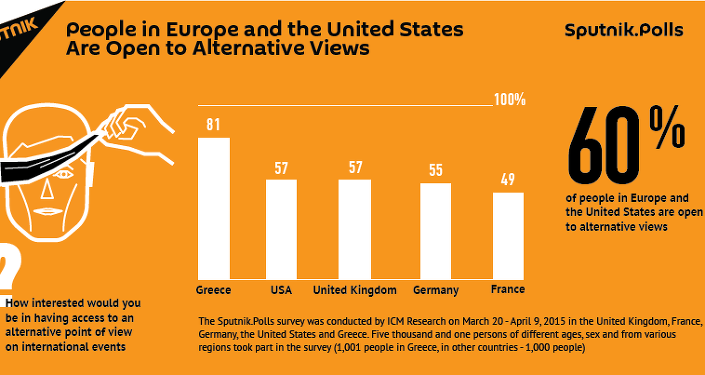 People in Europe and the US Are Open to Alternative Views
Turning to the results of the poll published earlier in the day, McCracken expressed hope that the percentage of those in favor of access to alternative media would grow.
ICM Research surveyed over 5,000 people in the United Kingdom, France, Germany, the United States and Greece between March 20 and April 9, 2015.
The poll revealed that more than half of US citizens responding to the questionnaire, 57 percent, are interested or very interested in accessing alternative news coverage on global events.
Sputnik
One of the significant sources of funds for the Fascistic Nazionist Khazarian Mafia is the healthcare industry which registered a whopping $3.09 trillion in 2014, and is projected to soar to $3.57 trillion in 2017, in the US alone. We believe that this is just a conservative figure.
We can avoid using drugs, defeat any viral attack and scaremongering easily by knowing how to build our own comprehensive antiviral system. Find more about it here.

OUT OF MIND » THE INSANITY OF REALITY » GOVERNMENTS & THE NEW WORLD ORDER » It’s Official, Alternative Media Win Over MSM