This is an interesting article detailing the connection between the Vatican and Jesuits with the BRICS bank.

Pope Francis declared a year of Jubilee, planed to begin in December of this year and some are saying this is a reconciliation of debts the world over. We covered the valid points which underpin this idea in the post Debt Forgiveness? | Pope Francis' Holy Year of Mercy could be a truly great jubilee.

The below article asserts that this is no coincidence and the Jesuits are actually trying to hijack the BRICS bank, preventing it from toppling the Federal Reserve manged fiat money system supported by the dollar or FRN.

This idea seems to be centrally supported by the notion that asset backed currencies (gold, silver, etc) are more secure and support 'freedom' more then fiat systems, but the historical data suggests otherwise. Bill Still, an economic historian demonstrates in his work that what determines if a money system will serve the people as a whole vs the elite is not what backs it, but who control's it; most importantly if the people are participating in that control. See the post RV/Gold Bait and Switch? - Secular Value vs Absolute Value - Hidden History of Gold.

Currency has long been mystified to service the ends of a hidden hand, but it is simply a tool, as such our knowledge of that tool will ensure it is used to our benefit. Just like anything else in life if we do not understand what we are doing, we can create chaos in our lives and act in ways which do not serve us.


Money is just a symbol of energy, with no inherent value what so ever, but when 2 people agree to use it honestly and fairly, it is imbued with value by their mutual arrangement; an equitable exchange using a contract. A farmer who makes cheese trading with a man who grows apples creates a correlative or relative measure of value (becoming effectively equivalent to each other), determined by the total amount of energy each expended to produce their products. If the farmer spent 200 hours to produce 50 bushels of apples, and the cheese maker spent 50 hours making 30 pounds of cheese, the value of each of their products becomes equal to them once it is exchanged between them,

The idea that we can create a symbol of value that has a fixed measure to it is an illusion. Even now I may get paid $10 an hour to shovel cow manure, while a CEO gets paid thousands an hour to sit behind a desk, both expend energy, but one's energy is given more value then another, arbitrarily. Value can never truly be fixed, by gold, silver or anything else. Currency is always relative, an agreement between the parties who are engaged in commerce. This has always has been the case and always will be. And acknowledging this Natural Law of agreement via free will and awareness, we can develop systems which acknowledge the truth and work honorably.

This objective or scientific perspective reveals that the symbol itself doesn't really matter, the farmers trading with each other could use gold, paper, even pig skins if they wanted to. What is important is how honorable their contract is, whether one person is lying to another or if there is full transparency and disclosure of intents and purposes.

Usury, or the charging of interest is a product of pandemic ignorance in a population who has lost sight of what money really is. Interest will always produce scarcity, class division and wealth aggregation into the hands of an elite, because that is what it is designed to do; a deceptive, manipulation tool. Mathematically, all the interest charged during a period of time must be spent back into the economy or a slow devaluation takes place; inflation.

That being said, if BRICS fails to disclose the full truth about their money system, encouraging the general population to gain knowledge of what money really is, then it is not all that much different then the system we have today. The core problem on Earth is lack of knowledge in humanity as a whole, more money may make the quality of life change, but the program of piracy and dishonor which plagues our world can only be addressed at its cause.

Debt forgiveness sounds like a great idea, but since most of the worlds debts are incurred due to usury, its like getting a day off from our would-be slave masters. The real solution is stop letting ourselves be enslaved, in this is case we must educate ourselves on the objective aspects of what money is designed to do (facilitate the flow of creative energy between two or more beings), leaving the mystical aspects of it by the wayside. Knowledge will lead to power, if acted upon.

As we have indicated in our previous article, “World Bank & U.S. Companies Ready to Cooperate with BRICS“, the Jesuits are planning to erase all persons’ debt starting December 8th of this year dubbed as the Holy Year of Mercy, a big PR stunt that is sure to lure the Sheeples once again into the caring arms of the Jesuit controlled Vatican Church, aka Roman Empire.

It would be a very dangerous scenario for those who have been fighting this battle for universal freedom as this single measure has the potential to negate all previous efforts of informing the people about the true extent of the Jesuits’ genocidal and financial crimes.
Even right now, Veteran’s Today has been very successful in using the terms “Khazarian Mafia” in lieu of the more familiar “Society of Jesus” or simply, “Jesuits”.

Related The Khazarian Mafia (Part II) | The Babylonian Cabal
The decision to start the debt jubilee year on the same month in which the BRICS Bank will begin accepting loan applications is not coincidental but a deliberate hijacking of the BRICS effort to eradicate global poverty of which the Jesuits’ Fiat Banking was the primordial cause.
BRICS New Development Bank Aims to Open Coffers by Year-End
The $100 billion development bank, funded by BRICS countries, will offer loans to other middle- and low-income countries. 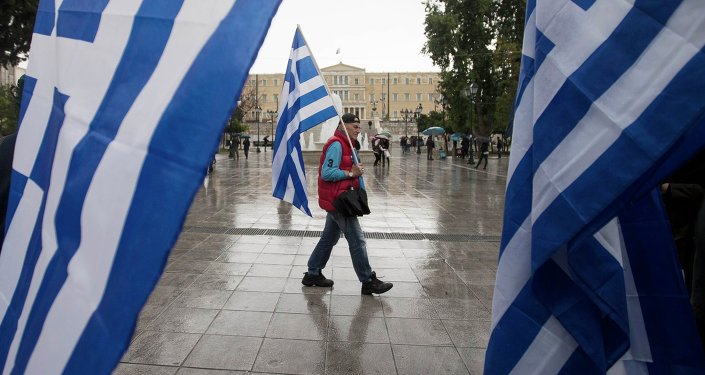 Greece Eyes Strengthening Ties With BRICS – Syriza Politician
The BRICS New Development Bank will be operational by the end of 2015, or early 2016, and membership will be open to all members of the United Nations, subject to agreement from the bank’s board of governors, said China’s Vice Finance Minister Shi Yaobin on Friday. 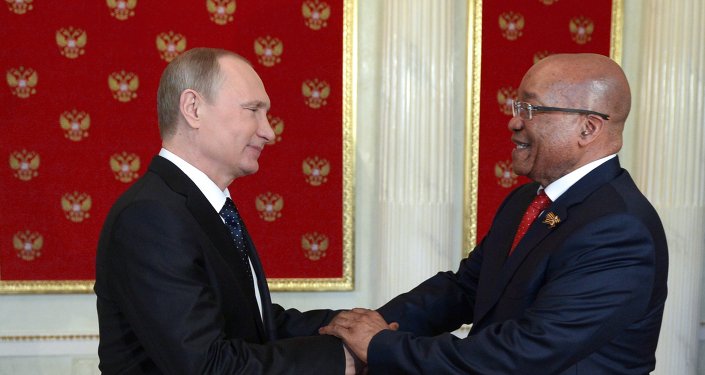 Putin Urges Development of BRICS to Boost Economies of Russia, South Africa
In a statement from China’s Finance Ministry, Yaobin announced that the strategic planning for the bank’s opening is underway, and that the bank will hold its first board meeting in Russia in early July, where the governor and deputy governor will be appointed.
The establishment of the New Development Bank was agreed at a BRICS summit in Fortaleza in July, in the aftermath of the 2014 World Cup hosted in Brazil, at which the heads of state from Brazil, Russia, India, China, and South Africa signed the BRICS bank charter agreement.
The bank is to have authorized capital of $100 billion to fund infrastructure projects, and an initial subscribed capital of $50 billion, which will be equally shared by the five BRICS members. The paid-in reserves are planned to be denominated in each country’s currency.
As well as the capital base, the New Development Bank will have a $100 billion Contingency Reserve Arrangement [CRA], to provide liquidity support to member countries in response to short-term balance of payments problems.

“The establishment of the BRICS bank is a landmark event in financial cooperation, which will promote the BRICS countries and other emerging markets, and infrastructure construction and sustainable development in developing countries,” said Yaobin.
“The promotion of reform in global economic governance has important and far-reaching significance.”
“The BRICS bank and the Asian Investment Bank have a complementary relationship, and will work together in the joint promotion of global and regional infrastructure efforts.”
On Monday it was announced that veteran Indian banker K. V. Kamath, currently nonexecutive chairman of India’s largest non-state-run bank ICICI, and formerly of the Asian Development Bank, has been appointed by India to be the first chief executive of the new bank. The position will be shared among the five BRICS members on a rotating basis. 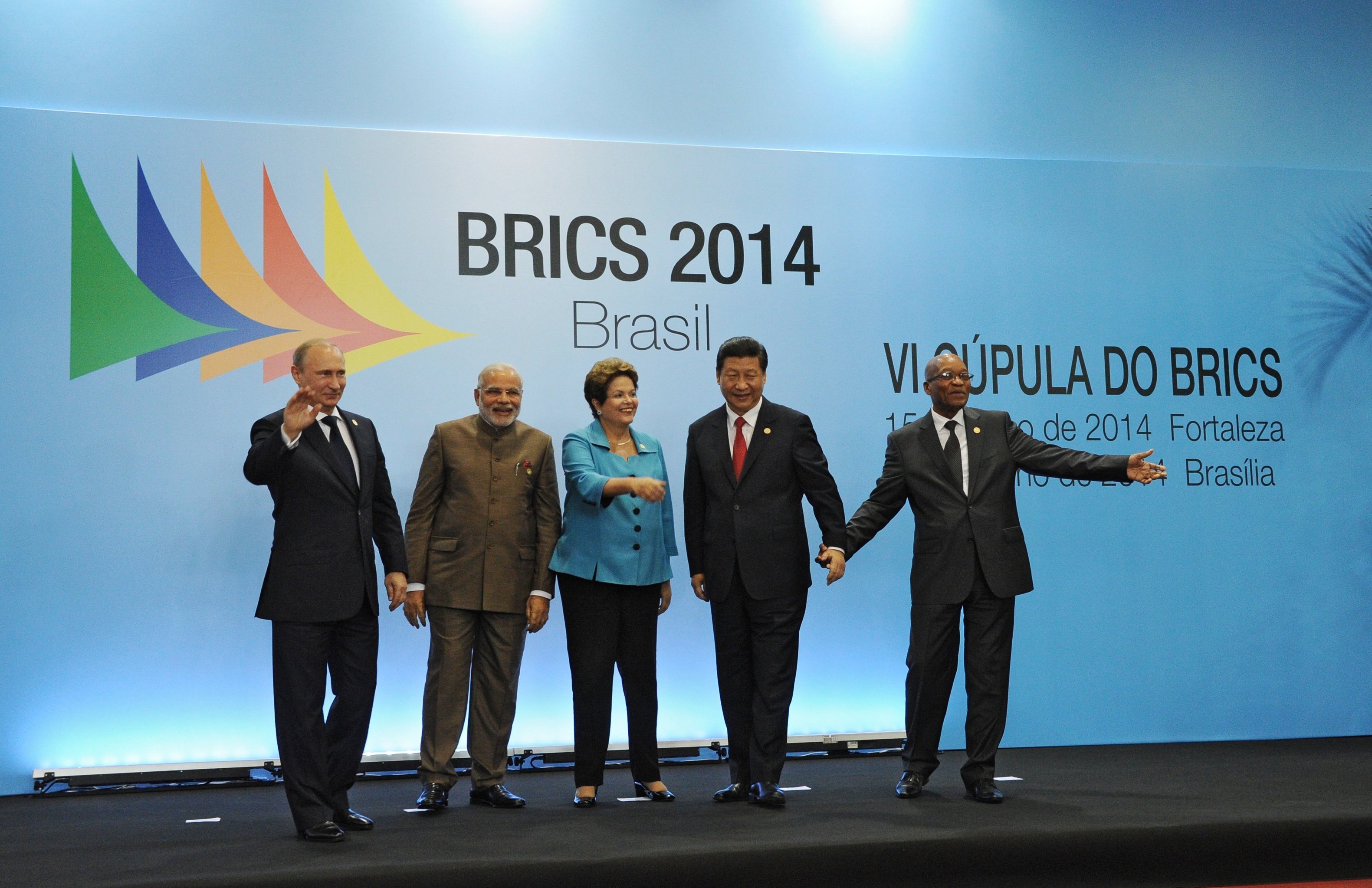 On July 15, 2014, BRICS leaders — Russian President Vladimir Putin, Indian Prime Minister Narendra Modi, Brazilian President Dilma Rousseff, Chinese President Xi Jinping and South African President Jacob Zuma (from left to right) — pose for a group photo in the Congress Center in Fortaleza.
“We remain disappointed and seriously concerned with the current non-implementation of the 2010 International Monetary Fund (IMF) reforms, which negatively impacts on the IMF’s legitimacy, credibility and effectiveness,” said BRICS in July’s Fortaleza Declaration.
“The IMF reform process is based on high-level commitments, which already strengthened the Fund’s resources and must also lead to the modernization of its governance structure so as to better reflect the increasing weight of EMDCs in the world economy.”
Yaobin said on Friday that Zhu Xian, vice-president of the World Bank was nominated by China to be one of the bank’s four vice-presidents. Brazil is set to appoint the bank’s first chairman of the Board of Governors, and the first chairman of the Board of Directors will be Russian. In addition to its headquarters in Shanghai, the bank is to have a regional center in Johannesburg, South Africa.
Sputnik
So, when Fulford says that “Khazarian mafia wants to donate funds to humanity in exchange for amnesty“, what the Jesuits’ really are saying and to which they strongly believe is that we are still at their mercy, for they are the gods that they always referred to in every pronouncements they made.

” I am certain that this Jubilee will give the whole Church the joy of rediscovering the mercy of God and making it grow. All of us are called to be merciful and offer consolation to every man and woman of our time.”