Admin
Posts : 106797
Join date : 2012-01-04
Location : Woodstock Nation
FIVE TRILLION PIECES OF PLASTIC ARE FLOATING IN AN OCEAN NEAR YOU [INTERACTIVE]
Posted by AbZu 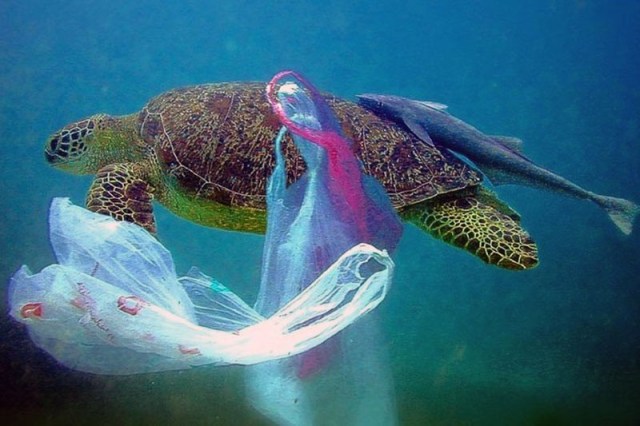 AND EVEN MORE LURKS BELOW THE SURFACE
By Christie Wilcox 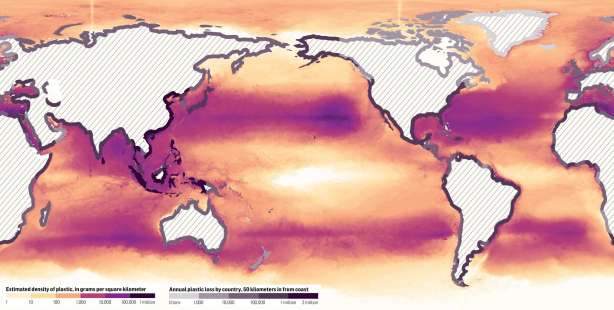 Once And Future Ocean Plastic
Map by Katie Peek. Sources: Eriksen et al., PLOS ONE, December 2014; Jambeck et al., Science, February 2015; Kukulka et al., Geophysical Research Letters, April 2012.
This map combines two new models. One model shows where plastic goes. By sampling water at nearly 1,600 spots and combining that data with an ocean circulation model, one team of scientists estimates that ocean surface waters hold some 296,000 tons of plastic. They also pinpoint where the pieces are collecting. Meanwhile, a second team found out where the plastic comes from. By combining coastal population figures with plastic consumption and waste-management data, the model indicates where plastic most likely originates, as indicated by the colors along the coastlines. China tops the list.
In December, a consortium of 12 research institutions published some of the first numbers on global ocean plastic pollution. By their calculation, almost 300,000 tons of plastic swirl near the surface of our seas today–equivalent to the weight of about 1,500 blue whales.
“The ocean is covered in a thin layer of plastic,” says Marcus Eriksen, director of research at the Five Gyres Institute. “It’s like a plastic smog.” The pieces resemble confetti and are so dispersed they’re almost imperceptible, even when they collect in slowly rotating gyres.
Still, the estimate is lower than expected. It doesn’t include plastic that has sunk to the seafloor or been eaten by animals, for example. Some scientists think far more plastic–to the tune of five million tons–makes its way from our shores into the oceans every year.
Roughly 20 percent of small fish have plastic in their bellies
To figure out where all this plastic is coming from, University of Georgia environmental engineer Jenna Jambeck and colleagues recently assembled a model that shows potential points of origin. And in a business-as-usual scenario, the model shows that plastic flow will double in the next decade. So the moment to slow the influx–and engineer ways to clean up the existing mess–is now.

Plastic isn’t evenly distributed in the vertical water column–some floats, some sinks, and some gets stuck in the middle. Most kinds of plastics, such as yogurt containers, break into floating fragments. Currents carry the pieces down a few meters, but they eventually float back up. Even taking those mixing currents into account, scientists find surface waters hold just a fraction of all ocean plastics.
Some researchers think the smallest bits of plastic neither float nor sink, but circulate in between. That’s because the pieces are so small, or their chemistry has been changed so much by ocean microbes, that they get dragged around by ocean flows.
Other kinds of plastics, like beverage bottles, immediately sink. Studies suggest the seafloor–typically 4,000 to 6,000 meters down–may hold far more than surface waters.

How To Deal With The Debris (Or Not)

Out At Sea
The trillions of plastic pieces in our oceans are incredibly spread out. “There’s not a persistent patch that you can go mine for trash,” Eriksen says. But the recent findings, paired with new circulation models, can streamline efforts to locate it. For example, nonprofit tech developer The Ocean Cleanup wants to use ocean currents to corral plastics into an array of anchored booms to concentrate and remove them.
65%: Ocean plastic, by weight, that lies north of the equator
On The Beach
Easier than trying to recover these practically irretrievable bits of broken-down plastic is keeping plastic stuff out of the water in the first place. In 2013, volunteers with the Ocean Conservancy’s International Coastal Cleanup collected more than 12.3 million pounds of beach trash around the globe, including more than 940,000 plastic bottles.
At The Source
Better yet, let’s curb plastic use altogether. The average American throws out 185 pounds of it every year. So while regulation may not be the sexiest approach to reducing waste, it’s likely the most tenable. After San Jose, California banned plastic bags, in 2012, bag litter choking the city’s storm drains dropped by almost 90 percent; it fell 60 per­cent in creeks and rivers. (Remember, those feed into the Pacific.)
Beyond Our Reach
Plastic’s interactions with sea life are more mysterious. Some species benefit: Barnacles and bivalves colonize floating plastic debris to create novel ecosystems. But sea turtles and sea birds die from eating plastic that clogs their digestive tracts. The biological impact of marine plastics, and how animals affect their movement in the water, are the next big questions scientists are striving to answer.

Eriksen’s team, in addition to building a model of ocean plastics’ whereabouts, created a zoomable map of what they term “plastic smog.” Check it out:

» Over 200 Nations Vow to End Plastic Ocean Pollution
» Plastic Bank and SC Johnson work together to stop ocean plastic
» This Floating Platform Could Filter the Plastic from our Polluted Oceans
» From high above they look like "Saucers" floating in the ocean!
» This is How We Clean 88,000 Tons of Plastic From the Ocean