What Needs to Change is Consciousness

What Needs to Change is Consciousness

Carnism, non-veganism, statism, governments, military, police, money, etc. are not the real problem, as they are the manifestations of a problem that we create. We are the problem. Focusing on getting rid of all these things we created will not solve the problem unless we get everyone to stop creating them, not the manifestation and symptom itself, but the poisoned consciousness that allows people to act in these ways of living to create these form of a human manufactured reality we choose to make out of what was already there objectively. These effects that we create and cause, are merely manifestation of deeper underlying root causal factors that allow these expressions to exist in the first place. We are the ones who created it from a lack of conscious awareness of many aspects of truth, good, right and morality, and we are the problems. Without us acting in the belief of necessity of those creations needing to exist, we could simply choose to not live like that any longer.
We are the one who create this human world (our collective co-creation), and we can change it. The only way to change it, is to change consciousness, to grow, heal, transform and evolve consciousness towards the potential right, good and true we can imagine and envision as better ways. Trying to dismantle or end all of the constructs we created, without first changing and healing the poisoned consciousnesses that creates it or allows it to continue to exist, is the not going to solve the problem of a diseased consciousness.
The above constructs, and more, need to be shown as falsities in order to demonstrate to people how wrong, fooled, tricked, duped, bamboozled, hoodwinked and manipulated they are in how they live their lives. This is the only true way forward once you understand the source of the problem. All over, you have people targeting single issues, like animals alone, government alone, military alone, police alone, and most of these are gradualism welfare single issues that seek to reform or make things a bit better while keeping these modalities of life existing, corrupt from inception, and not target the consciousness to solve all of the problems from the root.
We are the root of the problem. We do not know how to think nor how to learn. If people do not learn how to think properly, in order to learn properly, then they will continue to perpetuate the existing constructs, or even if these constructs are removed while devolved in consciousness, they will generate new falsities to enslave themselves with. All of the problems need to be faced in order to make us realize how ignorant and uninformed we are, how wrong we are. Then finally with this admission to yourself, you can catalyze yourself to actually truly start to initialize a Care for Truth and Seek Truth in your life, eventually leading to more in depth understanding of morality. 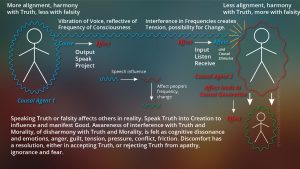 If people think everything is fine, then they don’t need to learn, everything they know about reality is doing them great so far, they have their house, car, family, trips, etc., all is well, why should they look into things deeper? They are satisfied with their current level of consciousness. People need to be shown the errors, wrong and falsity in their lives, as a catalyst, friction, interference and pressure to shake them up out of the their docile dream-like unconscious complacency. Only conscious awareness of the problems can bring us to want to change ourselves in order to no longer manifest them into existence.
If there are no humans creating what we create, living as we live, then those creations and the ways we live are gone. Morality, is not existent as a manifestation of a higher order consciousness if the higher order consciousnesses are no longer there to be able to express and act morally by understanding it. If no one is there to act morally, then there is no morality present, and it does not exist through the expression of any existent. Cause and effect is not morality, as it encompasses everything while morality does not, and cause and effect is forever existent in a universe of existents bound by it.
The only way to supplant and make obsolete these systems and constructs we created, is to evolve consciousness beyond creating them in the first place. Since we all are a part of the human world we have created, no one can change things on their own, everyone must act together to change into a higher order way of thinking, acting and living. In order for no more police to exist, we need to evolve consciousness to be able to police ourselves and each other as a caring group of people who will not stand for injustice and help each other resolve issues and defend each other. In order for no more external coercive government to exist, we need to evolve consciousness to self-govern ourselves internally in harmony, in order to govern ourselves externally with others in harmony and non-conflict. It is all up to each one of us to point the finger at all the is falsity around us and in us, in order to consciously choose to no longer manifest that falsity into existence.
The hope for a different reality in the future, based on an ideal potential better, realer, truer way (Truth L2), can take physical form and manifest if we have the numbers to do it, if we are all working on the same page of moral knowledge. But alone, while everyone else ignores the morality we are trying to create, will not allow hope to transform into reality, as we are not a “god” of objective reality, and so the dream of a better way will not bloom but remain a hidden potential no one is acting on behalf and manifesting into co-creation together. To key to change is everyone has to do it. Everyone has always been forced into a centralized authority idea as reality and lived by it: government, religion, god, corporation, military, police, etc. We can realize our own authority and live as equal co-creators of whatever better world we want to make. This is the real important of “being one”, it is to be on the same page in order to make that page come to life as reality. Governments, religions, priests of old, and others, create the stories and narratives for us to live by. We need to be be authentic authors of our own authority, not externalizing our power to anything.
If people can’t think properly because they haven’t ever trained themselves to understand consciousness, psychology and how to think properly, if they never trained themselves how to learn properly, then things will not advance as well as we think it will… That is a fantasy outcome not based in causality and logic of understanding the deepest root causal factor of our consciousness being what creates it all, first in thought and then in action, often acting on the legitimacy of a belief needing to be acted upon and lived by. If people do not learn how to think properly, then we are not going to actually get anywhere.
Know thyself, consciousness, psychology, behavior, thinking, learning, teaching… We reflect ourselves (consciousness) and reality (existence) as mirrors, or warped mirrors, into imagination to create multi-verse subjective realities. The power of consciousness to believe its own creations, the imagined inventions, to be real and true in objective reality, is not to be underestimated.